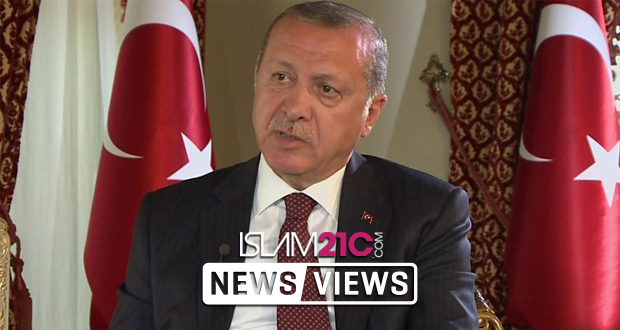 Erdoğan: “Most Turks no Longer want to be part of the EU”

The President of Turkey, Recep Tayyip Erdoğan has said that Turkey will be ‘comforted’ if the EU denies it membership of the union. He said that the prospect of being a full member of the union was “not indispensable for us” and affirmed that EU officials “have wasted our time” over more than a decade since negotiations for full membership started.[1] Erdogan reminded the EU, which is crippling with successive EU-exit schemes, incapable of dealing effectively with the influx of refugees and the rising tides of Islamophobia, anti-Semitism and neo-Nazism, that “Turkey is able to stand on its own two feet. We are relaxed.”

Erdoğan further denied claims that Turkey had imprisoned 150 journalists, maintaining that only two individuals carrying journalistic licenses have been imprisoned in Turkey. The President added that the majority of Turks did not “want the EU anymore.”[2] In response to why he is so strongly backing besieged Qatar, Erdoğan held that “Turkey is never in favour of Muslims killing Muslim” and that the administration was working to achieve dialogue and peace in the gulf.

This comes after the EU Parliament called for Turkey’s accession talks to be suspended if it goes ahead implementing the results of the 16th April 2017 constitutional referendum,[3] that sought to change the system to a presidential one, akin to the USA, France and Russia, eliminating laws that many saw conducive to military coups. The EU Parliament’s moves come despite over 25 million Turks voting in favour of the constitutional amendments, as well as the Nationalist Movement Party (MHP). Over 17.4 million Brits voted in favour of leaving the European Union.