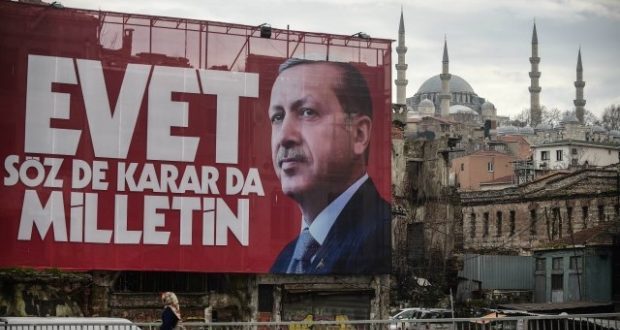 Turkish Referendum Reshaping its Past

In the name of Allāh, all praise belongs to Allāh, and may His peace and blessings be upon His final Messenger, his family and his companions.

Indeed, all praises are due to the Allāh ﷻ who granted His humble servants the permission to rewrite history once again, in a series of undefeated electoral, political and military victories over the past decade and half. I would like to take this opportunity to congratulate the figures involved in these successive victories: President Recep Tayyip Erdogan; the chairman of the AK Party Prime Minister Binali Yildrim; the campaigners; the people of Turkey and the Muslim Ummah as a whole. In an unofficial reporting of the electoral results, the Turkish citizens have agreed to pass the amendments in the constitution. Though initial results showed a significant majority of 63% for the ‘Yes’ vote, when a quarter of the votes were counted, with 100% of the votes counted, 51.4% of the citizens have chosen to declare ‘Yes’ to the constitutional amendments.

Read more about the amendments here:

Turkey Votes Yes or No

‘My enemy’s enemy is my friend’?

The results, again, defied all odds in light of the usual barrage of misinformation against the people and the government of Turkey, combined on deriding the ‘Yes‘ vote and its voters in favour of the ‘No’ vote. Advocates of the ‘No’ vote included the main opposition party, CHP, formed by Mustafa Kemal, the first president of the republic of Turkey; PKK, a Kurdish militant group, listed as a terrorist organisation by Turkey, EU and US; FETO, based in Pennsylvania, the organisation that is said to be responsible for the July 2016 coup attempt in Turkey; and HDP, a Kurdish opposition party in Turkey. Other countries in the EU went to the extent of enforcing a rather undiplomatic stance towards the ministers of the Government of Turkey, in an effort to send partial information to the overseas citizens of Turkey. [1] 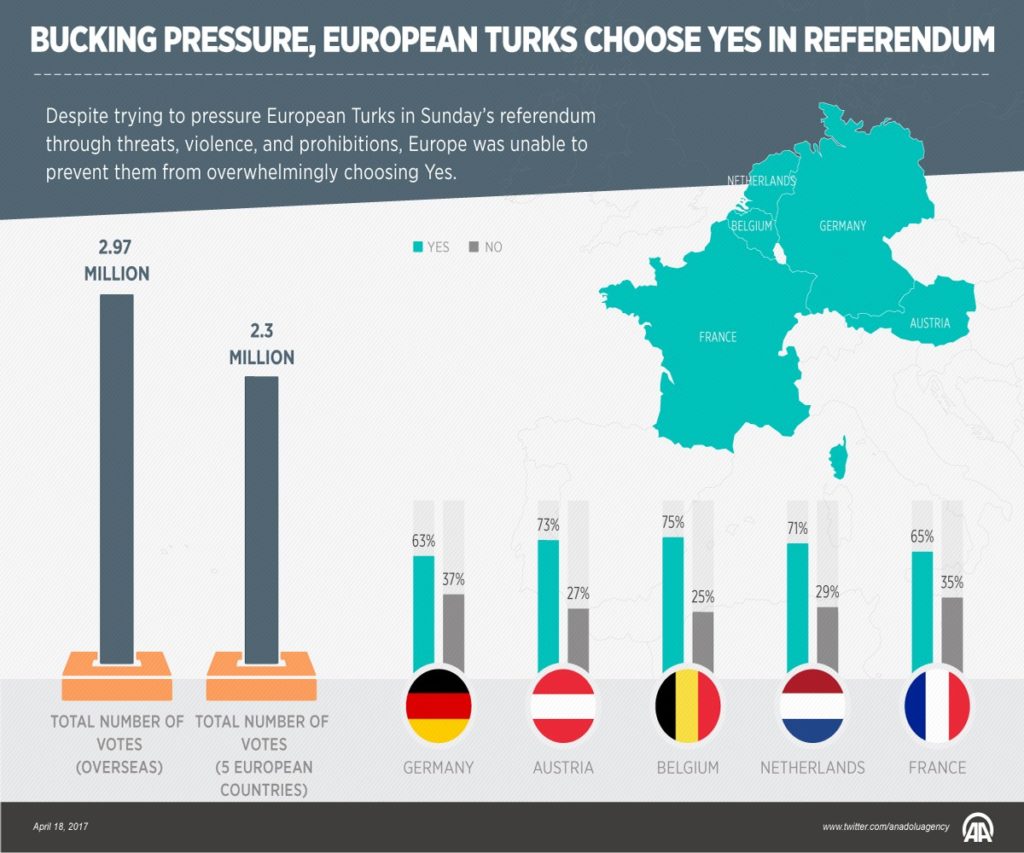 Yet, the Turkish citizens living in Europe sent a strong message to the world by voting ‘Yes’. The Netherlands, which saw some Government Officials advocating a militarised crackdown, [3] in the name of so-called ‘security concerns’ against Turkish diplomats just for trying to reach out to Turkish-Dutch citizens were given an unforgettable lesson. Upto 71% of the Turkish-Dutch electorate voted ‘Yes’ in this historic referendum.

Whilst of course the fanciful concept of ‘freedom of speech and expression’ in Europe did not extend to members of one of its largest minorities and their political representatives, wild Islamophobic remarks by Geert Wilders and other Islamophobes were commonplace, suggesting that ‘Yes’ voters should return to Turkey. I often smirk at the irony of second-rate politicians, dejected by their own polls, clobbered by the success of the very communities they routinely demonise. The score is 2-0 to the Dutch-Turks.

Hypocrisy of some European countries

Many in the international arena seem to question the validity of the mandate, yet they comfortably ignore the voter turnout at 85.46%—millions more than the 72.2% turnout in the UK’s EU Referendum. Percentages aside, that translates into 10 million more votes mandating the ‘Yes‘ constitutional change than those mandating Brexit. And unless there is an inherent belief in the racial superiority of the British vote, the result must compel proportional respect. It is a shame a handful of sensationalist “journalists” believe they know better.

A day later, the Organization for Security and Co-operation in Europe (OSCE) claimed that “lack of equal opportunities, one-sided media coverage and limitations on fundamental freedoms” in the Turkey’s 16th of April Referendum had caused an “unlevel playing field”. [4] Let us ignore for a moment that it was in fact the ‘No’ campaign that was systematically favoured by international media outlets, whose talking points were recited as facts whilst the ‘Yes’ campaign was literally banned from many countries. But should we also forget the near £10m of tax-payer-funded government pamphlets advocating Bremain [5] now lining Britain’s bird cages? Or how four newspapers control 71% of the UK national newspaper market [6]; right-wing media that mainly formed the Brexit narrative, hailing it a ‘victory for democracy’? As for the OSCE, one of the ‘independent’ German observers was pictured with a PKK flag despite the EU formally considering the PKK a terrorist organisation.[7] The Turkish Government has since rejected the OSCE report, dubbing it as politically motivated [4] [8]. 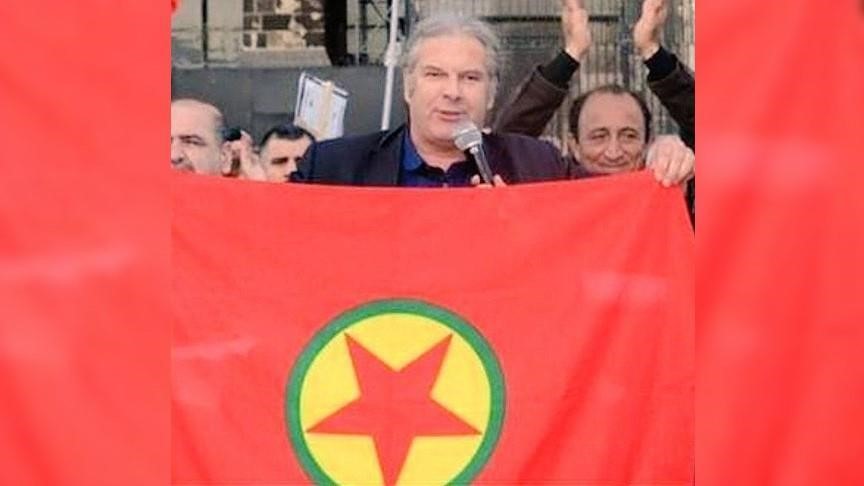 Many in the west also claim that these constitutional amendments will make the President more authoritarian, whilst ignoring the fact that many powers today—including the world’s democracy police, the USA—follow Presidential systems. Sure enough, it may occur as a scary thought for a Muslim country to begin competing with world super-powers with the added strength of popular support and approval of their people, lacking in others. It is not, however, without the necessary checks, that the President remains accountable to both the Judiciary and the Parliament. Moreover, both the President and the Parliament are elected by the people. This ultimately gives people the choice, which makes us wonder if critics are redefining the word ‘authoritarian’ or if they had a definition in the first place. Is it only ‘authoritarian’ when power ends up with those they do not like? Or is Abdel Fatah al-Sisi, who usurped power on the back of a tank, later ‘winning’ 96.1% of a kangaroo presidential vote [9] so democratic as to win lucrative trade deals with the EU? [10]

Have they forgotten that this constitutional amendment was done in a political format to change the coup-produced constitution of 1982? [11]

“For the first time in its history, Turkey has decided such an important change by the will of its national assembly and people,” Erdogan said. “In the past, our constitutions and the governmental systems formed by these [constitutions] had been decided either in extraordinary conditions like our independence war or during military coups. For the first time in republic history, Turkey changed a governmental system through civilian means.” [12]

Erdogan, a Model for Change

It is worth noting that Turkey was not as successful as it is now. In fact, before the AK Party came to power in 2002, with the leadership of Erdogan, the country was in economic crisis which followed the 2001 financial crash. Since then, Erdogan and the AK Party have not lost a single major election. Such consistency is not born of blind-love, especially a from a nation recently hammered with radical secularism and Islamophobia under Kemal Ataturk. But it is rather due to the many high achievements that the Turks have seen from this party and its leadership. These achievements come in many forms, including but not limited to: political stability, economic recovery and prosperity, military victories, increased independence, adherence to Islamic values and traditions, diplomatic pride in the international arena, among many other forms of material and immaterial success. It is a leadership dedicated to responsibility that the role requires, offering clarity of vision and helping others at the expense of their own, whilst fearing Allāh ﷻ. The Turks simply find no better alternative. If other world leaders took lessons as oppose to digs, their political campaigns would be all the easier.

Allāh ﷻ is the One that has made Erdogan successful and there may be a secret in this, as expressed in the verse of Allāh ﷻ:

“O you who have believed, if you support Allāh, He will support you and plant firmly your feet.” [13]

This may be a result of his humanitarian, political and—where possible—military support for the people of Syria, Iraq, Egypt, Somalia, the Rohingya, Palestine and many others in dire need; or a culmination of secret worship away from our eyes. Allāh knows best. The people of Turkey and their leadership supported those in need and Allāh ﷻ has supported His servants, and in this there is a lesson for us. This also remind us of the Hadith of Prophet ﷺ;

Despite the people’s forced deviation towards hard-line secularism over the past century or so, the people of Turkey are returning back to their roots that gave them ‘Izza (pride, honour, strength) in the first place. They are returning to Islām. It is a fact, and even clearer for those who have studied the rise of Islamic parties in Turkey, that the AK Party takes pride in its deep-rooted Islamic values, constantly praising Allāh ﷻ and seeking His ﷻ help and assistance every step of the way. When supporters cheered ‘Ya Allāh Bismillah Allāhu Akbar’ after the referendum results, Erdogan said;

“We do not kneel down to any human forces, we only bow down during Sajdah (bowing down to Allāh ﷻ in humility during prayers)” [15]

As with any good news, we could only conclude by seeking the help and assistance of Allāh ﷻ. Allāh ﷻ says:

“Allāh has promised those among you who believe, and do righteous good deeds, that He will certainly grant them succession to (the present rulers) in the earth, as He granted it to those before them, and that He will grant them the authority to practise their religion, that which He has chosen for them (Islām). And He will surely give them in exchange a safe security after their fear (provided) they worship Me and do not associate anything (in worship) with Me. But whoever disbelieved after this, they are the Fasiqun (rebellious, disobedient to Allāh).” [16]

We ask Allāh ﷻ that He guides this Muslim Ummah to that which pleases Him, to unite them in goodness, grant them successive victories that will make the word of Allāh ﷻ the highest. Upon Allāh ﷻ do we rely in all our matters.