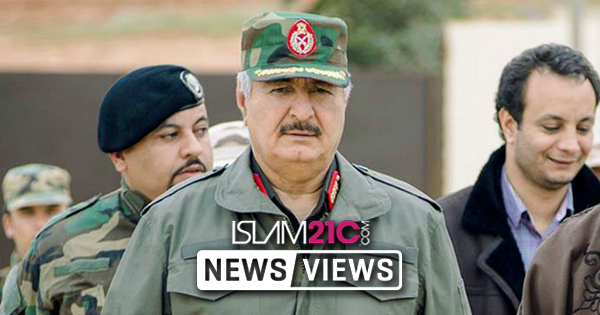 As the ex-CIA asset General Khalifa Haftar,[1] continues his war across Libya, human rights abuses in the eastern city of Derna have been largely ignored by the international media.

Derna has been subject to a 21-month long siege by General Haftar’s self-styled Libyan National Army (LNA) which has resulted in a shortage of essential supplies for its citizens and hospitals.[2] Despite a number of calls by both national and international bodies such as the High Reconciliation Committee (HCR), the UN-backed Government of National Accord (GNA), Amnesty International, and Human Rights Watch, General Haftar has shown no sign of lifting the siege.[3][4] General Haftar has previously described his actions there as being a means to “choke” the city regardless of the civilian cost.[5]

Joining General Haftar in his quest for dominion over Libya are the UAE and Egypt. While we have previously reported on the Egyptian role in Libya and the airstrikes they have carried out on the fighters which were responsible for driving ISIS out of the city,[6] the UAE’s role seems to extend much further. In relation to Derna, The New Arab has alleged that the UAE carried out the airstrikes which targeted the al-Fatayeh region of the city killing 17 and injuring 30.[7] More broadly the UAE has also been contracting its airstrikes in Libya to the private security company ‘Blackwater’, which was proven responsible for a number of massacres in Iraq, including one which killed and injured around 40 civilians. [8][9]

Though there are a few competing bodies in Derna the city is largely under the civilian administration of the democratically elected local council. This council has attempted to negotiate with Haftar for an end to the siege and a ceasefire with no progress thus far.[10]

“The HCR has itself admitted that there are many obstacles to successful reconciliation, particularly its lack of political or military leverage over Haftar’s forces, and lack of social leverage over the eastern tribes. The HCR has been unable to push the LNA General Command to commit to the outcome of the dialogue and to the HCR’s recommendations.” – al-Zubayr Salem[10]

With no pressure on Haftar from neither his Egyptian and Emirati backers which work with him militarily, nor the international community, the prospect of him halting his military campaign in favour of dialogue and reconciliation looks increasingly dim.