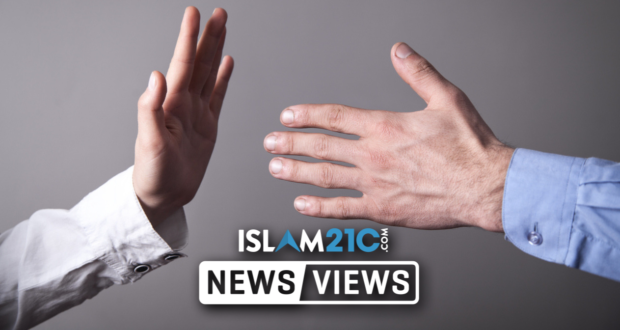 Some Muslims will tell you the stress they go through the night before a job interview or their first day at work. Many anticipate the feeling of being at a disadvantage, simply because they will refuse that handshake with the opposite sex for “religious reasons”. Well, this could all be a thing of the past.

New policies about physical contact at work are being introduced, in which employers will be given the ability to ban handshakes to avoid confusion about what kind of “touch” is acceptable. [1]

“Some employers may put a complete ban on physical contact. Whether that’s going too far or not is a question I would pose, because it’s contextual. Does shaking someone’s hand go too far?”

“They may just say ‘no contact at all’ because there’s no grey area. It makes it simple, but it takes away affection which in some ways is a sad thing.” [2]

She also added that although “you’re probably safe with a handshake”, it is best to follow a rule if there is one set by employers.2

“That’s the most physical contact I would have with a fellow employee. Even if it’s a sensitive situation, when someone is upset. I would be very mindful of a hug or putting my hand on their hand. Try to separate it from being too personal.” [2]

In a recent survey conducted by Totaljobs and consisting of 2000 adults, three out of four people were keen for a complete physical contact ban in the workplace. [3] The new guidelines aim to give each employee their right to consent in this matter.

The changes come as a result of the #MeToo movement that started in late 2017, whereby women who had been sexually assaulted, harassed, or intimidated spoke out against their perpetrators. [4] Now, employers may ban any form of physical contact to avoid expensive sexual harassment claims altogether.

The news comes as a celebration for Muslims. Although the Islamic ruling does not relate to hands specifically, in Islām, any form of physical contact between unrelated members of the opposite sex is generally prohibited. This is to prevent a greater harm, such as the cases of #MeToo, in the future, as well as the possibility of false accusations.

“If one of you were to be struck in the head with an iron needle, it would be better for him than if he were to touch a woman he is not allowed to.” [5]

Comfortable physical interaction between the sexes is part of the reason the #MeToo movement began, and it gained so much momentum because so many women had, unfortunately, been wrongfully treated and intimidated by their male counterparts.

In 2013, research commissioned by employment law specialists polled 1,579 people, finding the following shocking statistics on sexual harassment in the workplace: [6]

We, as Muslims, know that the general principles of our dīn always have humanities’ best interests at heart, and perhaps, if others begin to follow this rule in the workplace, then hopefully these cases can be avoided in the future.