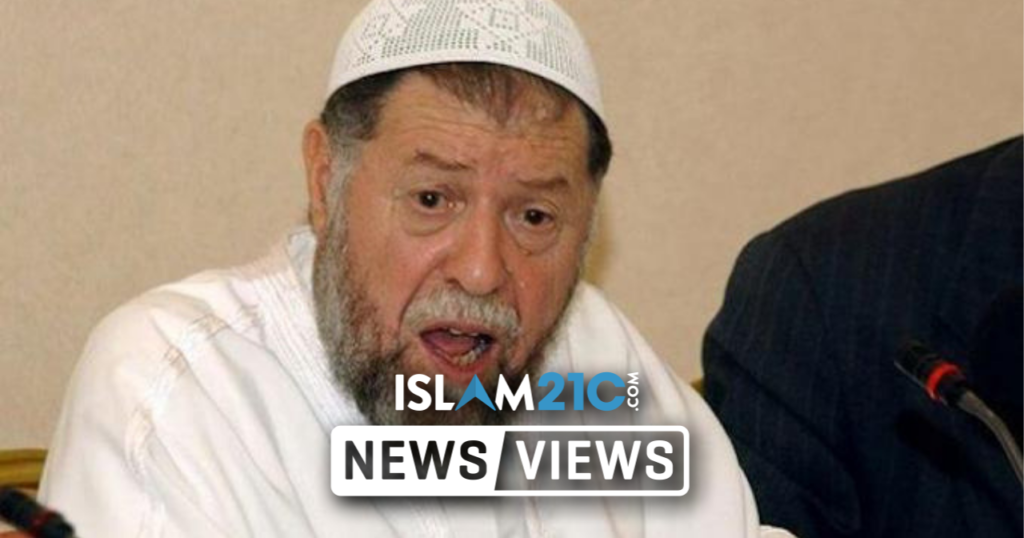 Shaykh Madani stood as a role model for the Muslim world: he fought against French colonialism as a teenager and was the leader of the Islamic Salvation Front, which successfully revived Islamic values and principles in Algeria.

Sh Dr Abbassi Madani, the Algerian revolutionary and leader of the Islamic Salvation Front (FIS), has passed away on Wednesday at the age of 88.

According to family sources, Sh. Madani had been admitted to a hospital in Doha, Qatar. He had been living in the city in exile since 2003 and, as of late, had been suffering from a terminal illness. [1]

Sh. Madani was born in 1931 in the Algerian town of Sidi Okba, southeast of the capital Algiers. He studied at a Madrassah (Islamic school) and attended an Ecole Normale, a French school and institution of higher education that trains teachers in Algiers, where he graduated with a diploma and became a qualified teacher. [2]

It was in Algiers that the esteemed Shaykh became involved in the resistance against French colonialism and occupation of Algeria. At the age of 17, he joined the National Liberation Front (FLN) that was fighting for independence. [3] Then, in 1954, Sh. Madani was captured by the French authorities and arrested, spending seven years in prison for his role in the fight for independence.

In 1961, a year before Algeria won its independence, Sh Madani was released from prison. Thereafter, he withdrew from political activism but was critical of the new regime headed by the FLN, which had become socialist and adopted secular values and principles.

It was in the 1980s, however, that Sh Madani once again became active in politics. During this period, the FLN regime faced mass criticism and discontent from the general public over its failure to raise living standards, provide employment, and prevent the economy from collapsing. At the same time, many Algerians looked to the teachings of Islām as a solution to the growing crisis and sought it as an alternative to the flailing FLN.

In 1982, Sh. Madani was arrested for taking part in one of the country’s largest demonstrations at the University of Algiers where over 5000 people called for reforms to FLN rule. A petition, urging the government to undertake reforms that would see the implementation of Islamic values and principles, was signed by Sh. Madani and two other senior Shuyūkh, and sent to President Chadli Bendjadid.

The professor was detained without trial and legal representation until 1984 when he was released and returned to teach at the Institute of Educational Sciences. Once again in 1988, large scale demonstrations erupted against the government, who, in turn, responded with a violent and suppressive crackdown. In a surprising reversal, the government legalised all opposition parties and announced that elections would be held.

Following this announcement, Sh. Madani formed the Islamic Salvation Front (FIS) in 1990 and competed in Algeria’s first ever held local elections since independence. The FIS emerged victorious after having secured 54.2% of the vote and won 5,987 seats in the local assemblies. [4] In 1991, the FIS emerged victorious once again in Algeria’s first parliamentary elections since independence, achieving 47.3% of the vote – more than double than what the FLN had achieved – and gaining 188 of the 231 seats available in the national parliament, becoming the largest party in the legislature. [5]

This result shocked the regime, who saw a FIS led parliament as unacceptable and their popular policies a threat to their power and interests. As a result, the electoral process was cancelled, the FIS was banned, and Sh. Madani and other high-ranking party officials were once again arrested and sentenced to 12 years in prison.

The Algerian populace responded to this in anger, staging demonstrations and protests. This led the military to intervene and violently quell the dissent. The military’s violent actions forced many to bear arms in defence, whom the regime labelled as ‘terrorists’ and, as such, used this as a pretext to ban all opposition parties and return Algeria to the FLN’s one-party rule, which has been the status quo ever since.

In August 2003, Sh. Madani was released from prison and allowed to leave the country for medical treatment and settled on Doha, Qatar. The regime in Algiers barred him from engaging in political activity and revoked his right to vote in any elections. Nonetheless, Shaykh Madani remains a giant in the Islamic world: his fight against French colonialism, his pursuit of knowledge, the attainment of his PhD, and his desire to rid his country of corruption and oppression and replace it with justice and fair governance under Islamic principles is a true inspiration to Muslims all around the world.

The life of Sh. Dr Abbassi Madani is one of patience, endurance, and perseverance in the face of injustice, oppression and evil. Muslims of the modern age should look to the esteemed Shaykh as a role model in how to navigate the difficult period we live in.

May Allāh (subḥānahu wa taʿālā) shower His mercy and blessings upon the Shaykh and grant him the highest abode in Jannat al-Firdous. Amīn.

NV1440
Share. Facebook Twitter LinkedIn Email Telegram WhatsApp
Previous ArticleImāms and Masjid committees must inform their congregations of the 18 degrees prayer timing
Next Article Handshakes could be banned under new “no physical contact” rule in the workplace