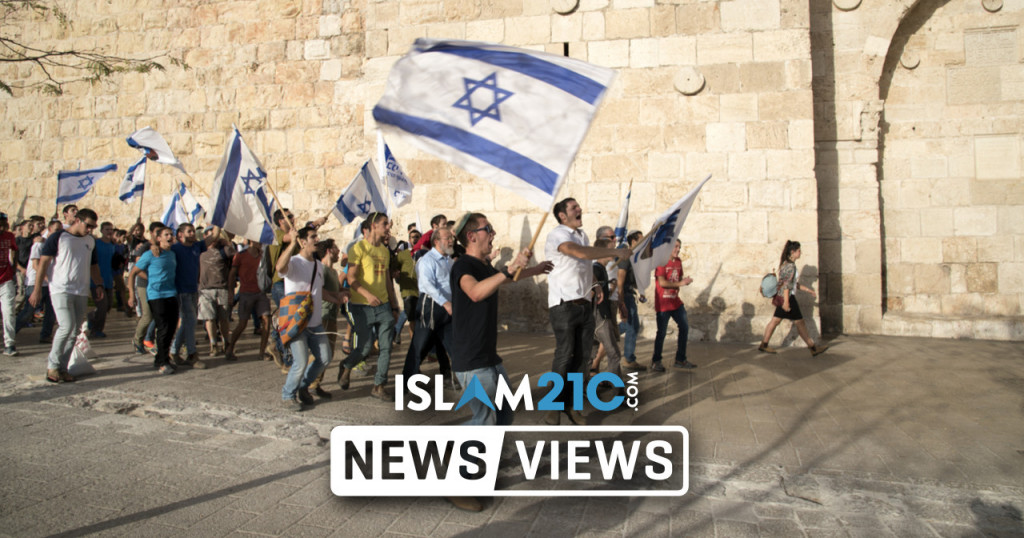 Hundreds of Palestinians staged counter rallies in honour of the Prophet (sall Allāhu alayhi wa sallam) immediately following Friday prayers. These rallies were held in response to the extremist Israeli “March of the Flags” event that took place earlier in the week. The government-backed flag march saw far-right demonstrators traversing through the Old City of East Jerusalem, whilst chanting hateful slogans against the Prophet (sall Allāhu alayhi wa sallam). Israeli protesters shouted other incendiary statements, which included “death to the Arabs”, and “may your village burn”. [1]

After Friday prayer, Palestinians protesting in Al Aqsa courtyard against the blasphemous remarks made towards the Prophet Muhammad (pbuh)by settlers during the”Flag March”.
[r] pic.twitter.com/4a1so5ggAY

In al-Aqsa, Israeli occupation forces targeted peaceful protesters by raiding the highly revered masjid and surrounding compound for the second time in as many months. Israeli forces indiscriminately fired tear gas, stun grenades, and rubber-coated metal bullets, all of which tragically injured at least nine and hospitalised three. [2]

"A good Arab is a dead Arab" , " May your village burn" , "The Arab is a son of a b*ch". We are sorry you'll have to listen to this, but this is actually what Israeli settlers chanted all the time during the so-called 'flag march" in #Jerusalem yesterday. #arabs pic.twitter.com/IU23MVXBt1

The “March of the Flags” – Tuesday’s rally by far-right nationalists – was held in ‘homage’ to the Israeli annexation of East Jerusalem during the 1967 war. Such rallies take place annually, and some Palestinians have informed reporters that the chants of “Death to the Arabs” and other racist slogans are commonplace during these provocative events. [3]

In addition to the injuries caused by occupation forces in al-Aqsa, according to the Palestinian Red Crescent there were a further 47 Palestinians wounded in a different but related incident. This was when occupation forces employed their favoured cocktail of military hardware against unarmed demonstrators – rubber bullets, stun grenades, and tear gas – during a separate protest near the small town of Beita, which is located in the northern West Bank.

Beita, a town that is home to five Palestinian clans, only consists of thirty families and had a population just below 10,000 in 2007. It has become a flashpoint for protests in recent months, as Israeli settlers have built an outpost on the town’s Mount Sabih. Israeli settlers have established in excess of 20 caravans on top of the mound, putting the livelihoods of at least 17 families at threat. The town has seen weekly protests as a result of these illegal settlements. In response, occupation forces have in recent days cut off the town’s main entrance with cement blocks, which were brought in with large trucks and a military crane.

To put into perspective how volatile the situation is in Beita, Fawas Beitar, a Palestine Red Crescent Society (PRCS) paramedic and coordinator, described the extent of violence wielded against peaceful protesters in a single day in June. He told Al Jazeera that locals had been resisting against Israeli settlers who had been destroying their olive orchards, assaulting young men, and destroying property. Frustrated with these crimes, the people rose up to protest, only to be fired at by the Israeli army:

The repeated Zionist aggressions against the religiously significant al-Aqsa compound, which houses Islam’s third-holiest site, have been met with alarm. There are signs that cracks are appearing in the fragile ceasefire that was declared on May 21 after neighbouring Egypt brokered an agreement between Palestine and ‘Israel’ following the bloody 11-day conflict. There have been other isolated and interlinked incidents following the truce. A recent example is that of 29-year-old Palestinian doctoral student Mai Afanah. Afanah was shot and left to bleed to death after being fired at by Israeli forces. Israeli forces claim that she was planning to ram her vehicle into a group of occupation soldiers near the village of Hizma, situated northeast of Jerusalem. [5]

The vehicle which appears in this video belongs to a #Palestinian woman who was shot at and wounded by Israeli occupation soldiers today near the village of Hizma, northeast of Jerusalem. The Israeli occupation army claimed the woman hd attempted to run over soldiers. pic.twitter.com/BuAE7sciIL

Further examples of avoidable and unnecessary Palestinian deaths include that of a 16-year-old boy by the name of Ahmed Shamsa, who was shot in the head on Wednesday during anti-settlement protests. Owing to his grave injury, he passed away Thursday morning while being treated at Rafidia Surgical Hospital in Nablus. He had attended a rally against the development of a settlement outpost in Jabal Sabih (Mount Sabih), which is located in Beita. [6]

A week prior to the death of Shamsa, there was also the appalling case of 15-year-old Mohammed Hamayel, who was shot and killed by the apartheid regime’s forces on Jabal Sabih. [7]

Health ministry: Mohammad Hamayel, 15 was killed by Israeli army during clashes in Beita village.
Three Palestinians were killed since May during protests in Beita village against a new illegal Israeli outpost that recently established by religious settlers on Sabeih Mountain. pic.twitter.com/bnv3TYIhwQ

While those rallying on Friday’s march were defending the honour of the beloved Prophet (sall Allāhu alayhi wa sallam), the newly installed government of ‘Israel’ has quickly indicated its hard stance against Palestinians living in the occupied territories. This was proven when it provided its seal of approval to last Tuesday’s ultranationalist “March of the Flags” rally through the Old City. The rally had already been given the preliminary green light by the outgoing government of Benjamin Netanyahu, and was subsequently planned “in a format to be agreed between the police and the parade’s organisers”. [8]

However, in a reminder of the widely divergent views held by members of the new Israeli government, some objections were heard among major political players in the coalition. Centrist Yair Lapid, head of the Yesh Atid political party and newly appointed foreign minister of ‘Israel’, condemned the march. He argued that those calling for “Death to the Arabs” while waving the Israeli flag were not actually genuine representatives of ‘Israel’.

“The parade of flags in its current format had to be approved. I congratulate the Minister of Baptism @omerbarlev For the excellent staff work and event management. At the same time, the fact that there are extremist elements for whom the Israeli flag represents hatred and racism is abominable and unforgivable.” [9]

“It is inconceivable how one can hold the Israeli flag in one hand and shout “Death to the Arabs” at the same time. This is neither Judaism nor Israeliness, and that is certainly not what our flag symbolizes. These people are a disgrace to the people of Israel.” [10]