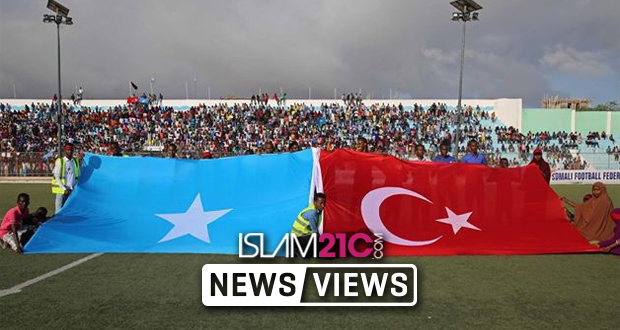 The inhumane bomb blast in the Somali capital Mogadishu that killed over 300 people and injured numerous others was made from a combination of military-grade and homemade explosives, said a senior police officer involved in the investigation.

He also said that the truck was packed with over 2 tonnes of explosives as the blast rocked a busy KM5 road junction.

“The investigation is still going on but with the help of military experts we have found that over 2 tons of explosives, including homemade and sophisticated military explosives, were used,” the officer said on condition of anonymity due to restrictions on reporting to the media. [1]

The triggering of the bomb coincided with the presence of a nearby fuel truck which multiplied the disastrous casualties caused on the day.

Mahad Salad, a Somali lawmaker, confirmed that 130 of the 276 dead were unrecognisable. [2]

Immediately after the attack, the Turkish Presidential spokesman said that President Recep Tayyip Erdogan had ordered an Air Ambulance be deployed to transport the injured victims of the devastating attack from Mogadishu to Turkey for specialist care.[3]

As the former Somali diplomat, Abukar Arman, said in an opinion piece titled “Erdogan: The hero of Somalia”; “The fact is, Erdogan has done for Somalia what no other world leader has done in decades”. [4] Even now, there are no reports of any other country providing such swift humanitarian response let alone providing any meaningful media coverage for the worst terrorist attack in Somalia’s history. [5] [6]

The Turkish Ministry of Foreign affairs released this statement shortly after the incident;

We wish God’s mercy upon those who lost their lives in the attacks, convey our condolences to the families who lost their loved ones and wish speedy recovery to the wounded.

Turkey renews its strong solidarity with the Government and people of Somalia in the wake of the said terrorist attack occurring in a period in which significant progress has been achieved to ensure stability in Somalia.”[7]

Turkey has increased support for the embattled country since the then-Prime Minister of Turkey Recep Tayyip Erdogan made a historic visit amidst the narrative that Mogadishu was a no-go zone.[4] Just a few weeks ago, Turkey inaugurated the first military training camp for Somali soldiers.

On 16th of October, the Turkish Health Minister, Ahmet Demircan, visited Somalia to oversee the Turkish assistance with 33 other Turkish staff.[2]

The fact that a malicious group is able to obtain over 2 tonnes of sophisticated military-grade explosives has raised some alarming questions, especially about the source of such a vast amount of deadly material in such a grade, capable of causing a massacre with a single trigger.

Any from this galley: http://aa.com.tr/en/pg/photo-gallery/turkish-health-minister-ahmet-demircan-visits-somalia/0