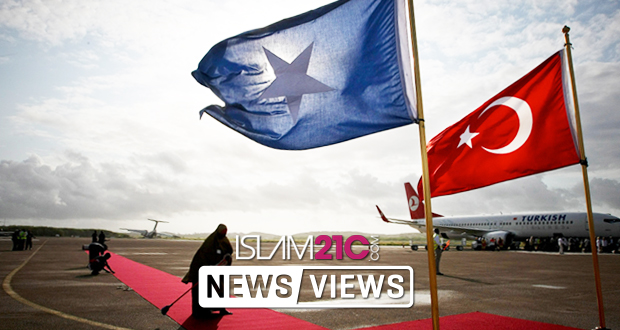 Turkey is set to operate a military training camp to train the Somali Army, as part of a plan for “forward-basing” in strategic locations in the Middle-East. Abdirashid Abdullahi Mohamed, the Defence Minister of Somalia said; “We will begin deploying soldiers at the facility. Our army and other forces will receive training at the camp”. He also added that the camp would help strengthen the Somali Army. [1]

The facility had been under construction for the past two years and is expected to begin operation in September. This military camp is spread over 4 square kilometres and has the capacity to train more than 1,500 military personnel at a time. The military base enjoys a strategic location in close proximity to Mogadishu’s Aden Adde International Airport. [2]

It is said that the other important key aspect for Turkey to forward-base in Somalia is to help the embattled country fight “terrorist threats”. In the past, the United Nations-approved and western-backed African Union Forces were surrounded by accusations of human-rights abuse and violations. [3] [4] Abuses involved gang-rape of vulnerable women and children as young as 12 among other violations reported in a 71-page report released by the Human Rights Watch. [5]

Bilateral ties have been improving between Ankara and Mogadishu for some time. Mogadishu also hosts the largest Turkish embassy, it was opened as Turkey was providing humanitarian assistance to the drought-stricken country.

Turkish Airlines is also said to be the only non-African airline that connects Mogadishu to international destinations around the world on a regular basis.

Humanitarian assistance from ‘The hero of Somalia’

In an Aljazeera opinion piece written by Abukar Arman, the former Somalia special envoy to the United States and a foreign policy analyst, stated that Turkey’s President Erdogan received a hero’s welcome and is hailed as ‘The hero of Somalia’ for his prudent support for Somalia and remaining “impartial in the clan-driven internal politics”.

He states that “the UN and its affiliated international institutions—mostly based in neighbouring Kenya—collected an estimated $55bn on behalf of Somalia. Dubiously, the nation in whose name this hefty sum was collected, has not gained any substantive infrastructure-related or any other sustainable project.” On the other hand, Erdogan’s team had clear instructions to “produce tangible, sustainable results with Turkish funds” of approximately $500m, just one hundredth of what the UN had collected between 1991 to 2011. Thereby, he implicitly put a question mark on the spending of those $55bn collected by the UN and its affiliated bodies.

Furthermore, he adds that the bilateral relationships were developed to rebuild the nation by constructing roads, hospitals, mosques and schools. Abukar also underlined that; “The fact is, Erdogan has done for Somalia what no other world leader has done in decades.”

Additionally, the Turkish Government’s official aid organisation, Turkish International Cooperation and Development Agency (TIKA), has continued to provide support to Somalia and other developing countries in their times of need, making Turkey the top provider of Humanitarian assistance on a percentage of GDP basis and the second largest spender of Humanitarian assistance, just shy of $0.3bn from the largest spender. [7]