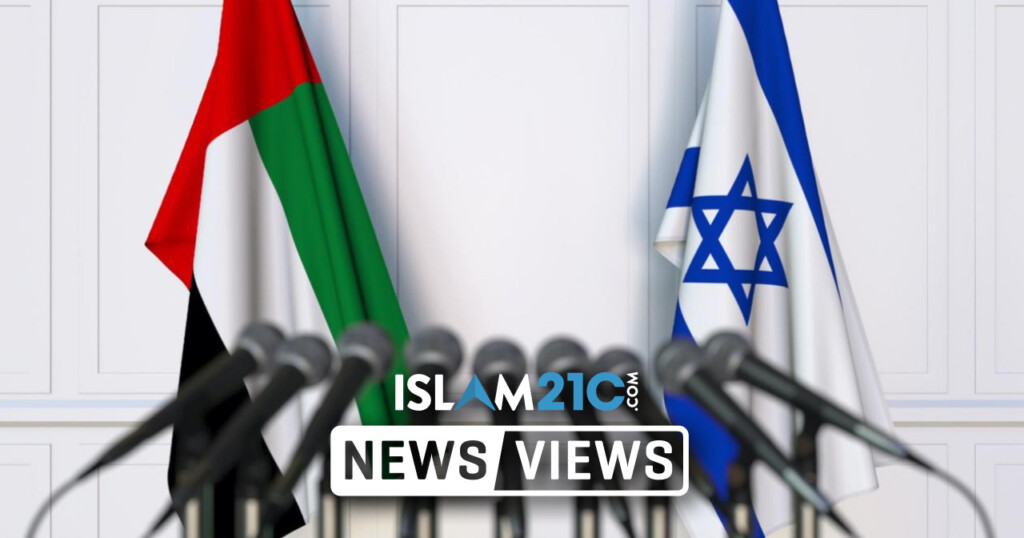 US President Donald Trump’s announcement yesterday that the UAE and Israel have signed a historic peace agreement has seen widespread condemnation across the Muslim world. In what he called a “truly historic moment”, President Trump expressed hope that other Muslim countries would soon follow suit.[1]

It has widely been reported for some years now that the two nations were already in cooperation behind the scenes, with both taking part in joint military exercises.[2] Israel was invited to take part in EXPO 2020 in Dubai,[3] and there have been reports of the UAE helping Zionists purchase property from Muslims in the vicinity of Masjid Al-Aqsa.[4]

The agreement now seemingly brings what was already occurring into the open. It is seen as a big part of Trump’s efforts towards his so-called “Deal of the Century”, which was entirely rejected by the Palestinians and would see them lose great swathes of land in an illegal annexation of land that is already illegally occupied. The deal would also result in the Palestinians losing claim to East Jerusalem as their capital.

Israeli Prime Minister Benjamin Netanyahu, who continues to face trial for charges of corruption,[5] was swift to tweet that it was a “historic day”, whilst announcing that his annexation plans were delayed but “remain on the table”. The two nations plan to meet shortly to sign deals on, among others, investment, tourism, direct flights, security, telecommunications, technology, energy, and the opening of reciprocal embassies.[6]

The agreement has seen a strong reaction from many around the Muslim world, with the Palestinians uniting in their condemnation. Munib al-Masri, a former Palestinian Authority (PA) minister, told Al-Jazeera:

“The late Sheikh Zayed was a dear brother to me, I knew how much he was proud of his support for Palestine… I never imagined that in my lifetime I would see the day in which the UAE would simply sell the Palestinians out for the sake of normalization. It’s very shameful. I can’t believe it until now.”

“Using annexation as a pretext is an exploitation of Palestinians to cover up what’s been done here. The format of the agreement implicitly approves of Israel’s annexation of Jerusalem. It only opposes ‘further annexation’ while approving what’s been annexed already.”

“Netanyahu responded directly to this point and said that annexation is still on the agenda. This is a slap in the face of the UAE – to prove them wrong and embarrass them.”

“We still have hope on the Arab people, including the Emirati people who unfortunately cannot express their mind due to terrible state repression. The Arab public still rejects such normalization.”[7]

Another active member of the PA, Mustafa al-Barghouti, said:

“We were not surprised that much because the Emirati army was never on the borders ready to fight Israel.”

“This is an attempt to enforce the ‘deal of the century’ that aims to liquidate Palestinian national rights. It represents a denial of Palestinian, Arab and Islamic rights.“[8]

Likewise, the PA’s Minister of Social Affairs addressed the narrative that the deal stopped the planned annexation:

“The UAE is trying to deceive and mislead the public by repackaging this shameful agreement as a service to the Palestinians and claiming that it halts annexation, but that’s merely throwing dust in the eyes.”[9]

Condemnation came from other nations as well, such as Libya and Turkey. Libyan official Mohamed Amari Zayed described the move as “another stab in the back of the Ummah”, saying:

“This is a betrayal of the UAE state that doesn’t surprise. With its destructive role in Libya, Syria and Yemen, it is a natural result of the embargo imposed on Qatar, Palestine and the independent nations of the region.”

“The recent losses of the Islamic Ummah as a result of this policy of the UAE are much higher than the Zionist regime killed and displaced in the last 50 years.”[10]

“The move against Palestine is not a step that can be stomached,” adding that he told his foreign minister that “we may also take a step in the direction of suspending diplomatic ties with the Abu Dhabi leadership or pulling back our ambassador.”[12]

The Turkish Foreign Ministry had already issued a statement, saying:

“The UAE, which is pursuing secret ambitions over a US plan that is stillborn, null and void, ignores the willpower of Palestine.” The statement added that the UAE “has no authority to negotiate with Israel on behalf of Palestine without consent from its people and administration regarding vital matters.”

“Neither history nor the collective conscience of the region will ever forget and forgive the hypocritical behaviour of the UAE, which is trying to depict the deal as a sacrifice for Palestine, when in reality it is a betrayal to the Palestinian cause for its own narrow interests”.[13]

Some may point to the fact that Turkey has long-standing agreements with Israel, but relations have been severely cut since the raid on the Mavi Marmara flotilla in 2010, which led to a reconciliation announcement in 2016. That reconciliation, however, was short-lived, after Turkey expelled the Israeli ambassador in May 2018 in response to Israeli attacks on unarmed protesters on the Gaza border in the “Great March for Return”.[14] There has been no ambassador in either capital since May 2018.[15]

The UAE peace deal has had some favourable reaction from certain other Arab nations. Egyptian regime leader Abdel Fattah el-Sisi was quick to congratulate Netanyahu, and further support was expressed from Oman and Bahrain.[16]All eyes are on Saudi Arabia next.

The news also found strong support from Maajid Nawaz, the founder of the Quilliam Foundation, the widely discredited UK think-thank that seeks to promote policy that is seen to be against Muslim interests in the UK and abroad.[17] Nawaz expressed hope that other nations would follow soon, labelling them “rogues” until they do so: