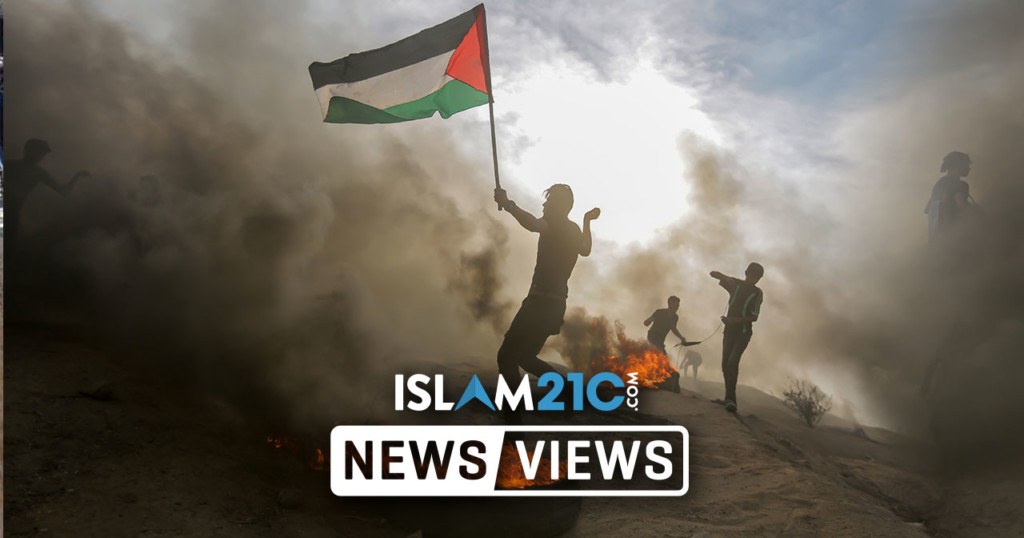 Palestinians in the occupied and besieged Gaza Strip have marked the one-year anniversary of the Great March of Return.

Four Palestinians were martyred and hundreds of others injured as tens of thousands of Palestinians rallied at the border fence between besieged Gaza and Israeli occupied territories. Israeli Occupation Forces used indiscriminate live ammunition to dispel the protests that demanded an end to the 12-year-old blockage imposed on the small strip.

“We will move towards the borders even if we die. We are not leaving. We are returning to our land,”[1] said Yusef Ziyada, a 21-year-old protestor, referring to his ancestral lands bordering the Gaza strip usurped during the Nakba of 1948.

Since March 2018, Palestinians have been calling for an end to Israel’s oppressive and deadly siege that has made Gaza into the world’s largest prison, as well as calling for the right to return to their homes.

As a result, the Gaza fence which cordons it from Israeli occupied territories has seen weekly demonstrations by thousands of Palestinian men, women and children and marks its first whole year. More than 260 Palestinians have been martyred, including journalists, aid workers and disabled persons and thousands of others have been wounded.

According to The Palestine Centre for Human Rights, of the 266 martyred, 50 are children, nine are women and one is an elderly man. Of the 30,398 wounded, 3,175 are children and 1,009 are women with injuries ranging from head and neck wounds to others at the torso and legs.

International charities and human rights organisations have been taken by shock due to the large numbers of execution-like deaths meted out to children, and have condemned the indiscriminate killing of civilians.

“The killing and maiming of children can never be acceptable and as in all conflicts, the perpetrators must be held to account,”[2] said Jeremy Stone of Save the Children. “The numbers of injuries are already in the thousands and are only going to get higher unless this stops now” he added.

“Children are seeing their friends shot, their parents shot and they are living with the outcomes of this without adequate support to go around to enable them to recover physically or mentally. We are deeply concerned by the psychological impact prolonged exposure to such violence will have on Gaza’s children.” [2]

The Palestinian territories of the West Bank and the Gaza Strip have been occupied by Israel since the Arab defeat of the 1967 war. Many Gazans, however, stem from displaced families in 1948 during what Zionist militias originating from Western Europe dubbed their “War of Independence”. Thousands of families still hold the keys of homes they were forcibly displaced from during one of history’s largest land appropriations and ethnic purges.

The Zionist entity is the world’s longest lasting military occupation in modern times and has imposed severe restrictions on the remnants of Palestinian communities in all parts of occupied Palestine through institutional racism and antagonism.

The Israeli occupation continues to build illegal settlements in the West Bank. Due to the huge number of housing units in each, these settlements have transformed into small towns, known as Kibbutz.

Over 600,000 Israelis now reside illegally on Palestinian land and those Palestinians ejected from their homes now have nowhere to live.

Settlements are illegal under International Law and multiple resolutions have been passed by the UN condemning Israel’s flagrant violations of such rules without any palpable consequence.

Over 750,000 Palestinians were expelled from their towns and cities throughout Palestine when militant Zionist groups such as the Irgun, Haganah and Levi declared the creation of the “state” on top of Palestinian villages in 1948.