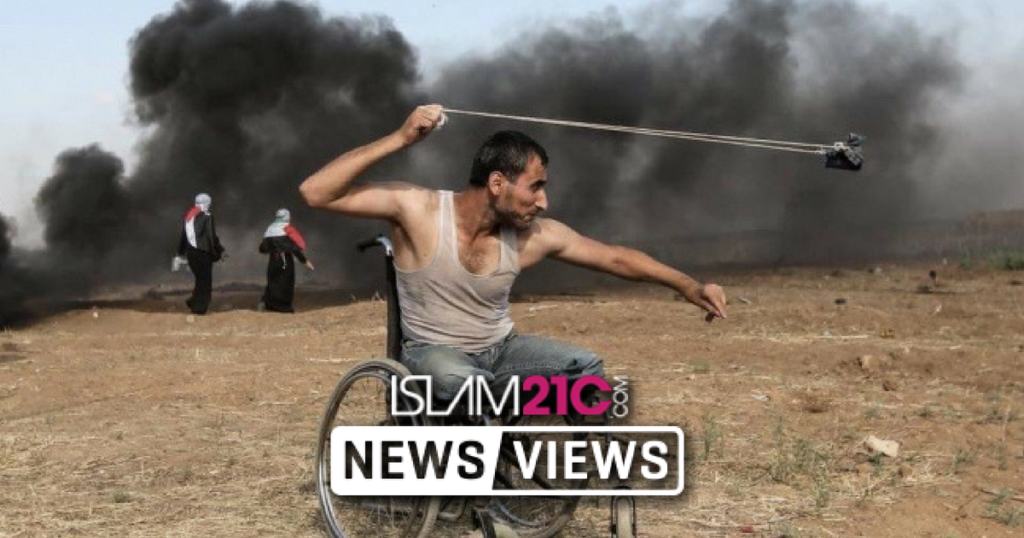 As the sun rose over Gaza the death toll from Israel’s lethal military action on unarmed civilians grew to 60. Family members of the deceased gathered for funerals quietly sobbing, marking the 15th May by two catastrophes. That of the forcible expulsion of Palestinians from their homeland and of the burial of their loved ones, including an 8 month-old baby, Laila al-Ghandour,[1] and a double leg amputee – Fadi Abu Salah.[2]

“We were at the tent camp (some distance from the Israeli fence) east of Gaza when the Israelis fired lots of tear gas. Suddenly my son cried at me that Lolo was weeping and screaming. I took her further away. When we got back home, the baby stopped crying and I thought she was asleep. I took her to the children’s hospital and the doctor told me she was martyred (dead).”

Fadi Abu Salah has become one of the symbols of the Palestinian resistance. He first lost his legs after they were amputated when he was shot by Israeli snipers. Epitomising the spirit of the Palestinians, he did not lament his loss, but got into a wheelchair, stone and slingshot in hand, and went to the fence to protest.

Fadi’s actions bring to mind the words of Allāh:

Though Fadi Abu Salah was murdered by an Israeli sniper on Monday, we hope today he is in the gardens of eternal bliss, inshāAllāh.

Whilst Israeli snipers were picking off unarmed protestors in Gaza, brave Palestinians were being beaten and arrested by Israeli security forces for protesting outside the new US embassy in Jerusalem. Israeli bystanders were observed cheering and chanting:

There was international condemnation of Israel’s barbaric use of force against unarmed protestors, and in an unusual move all but the US ambassador stood for a moment of silence for the Palestinian victims at the UN Security Council. The Bolivian ambassador also read out the names of the killed and admitted the world had failed Palestine.

“Bolivia condemns the genocidal reaction of the Israeli army that slaughters Palestinian brothers in cold blood.”[5]

Venezuela and South Africa also condemned Israel, with the latter withdrawing its envoy to Israel. Whilst Turkey and Israel expelled each other’s envoys in an escalating dispute over the killing of unarmed Palestinian protestors. The Irish and Belgian governments summoned the Israeli ambassador over the Gaza Killings.[6]

The Turkish government voiced its concern and loudly condemned the killings. President Recep Tayyip Erdoğan said during a speech on Monday: [7]

“Israel is wreaking state terror. Israel is a terror state. What Israel has done is a genocide. I condemn this humanitarian drama, the genocide, from whichever side it comes, Israel or America.”

Erdogan is among Hamas's biggest supporters and there is no doubt that he well understands terrorism and slaughter. I suggest that he not preach morality to us

President Erdoğan responded by calling out on Israel’s brutality:

Netanyahu is the PM of an apartheid state that has occupied a defenseless people's lands for 60+ yrs in violation of UN resolutions.

He has the blood of Palestinians on his hands and can't cover up crimes by attacking Turkey.

Want a lesson in humanity? Read the 10 commandments.

He went on to say:

Hamas is not a terrorist organization and Palestinians are not terrorists.

It is a resistance movement that defends the Palestinian homeland against an occupying power.

The world stands in solidarity with the people of Palestine against their oppressors.

Calls have intensified worldwide for continued pressure individually, collectively and financially. Protests erupted across the world protesting the relocation of the US Embassy and the killing of Palestinian demonstrators. On Monday evening, in Istanbul’s Beyoglu district thousands of people gathered to demonstrate against the brutality.[8]

Despite the Trump administration’s racist policies, both domestically and internationally, Americans – both Muslim and non-Muslim, protested in New York. One New Yorker, John Dennie said: “I was following the news all day today, and the death toll was just rising. The idea that the IDF (Israeli army) are using snipers to pick out protesters is just not right. I came to show my solidarity with the people of Palestine. It pains me that so much of our tax dollars goes to these murderers,” referring to the $3bn in aid the US gives Israel annually. [9]

On the other hand, many are frustrated at the lack of response and silence from Arab leaders around the world. One such example is a Palestinian lady who states in the following video that the Arab leaders are “cowards”.