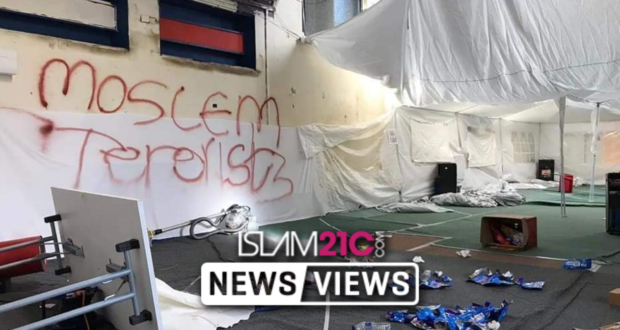 An Islamic school in Newcastle has been the subject of a Islamophobic attack after swastikas and anti-Muslim graffiti were sprayed on the walls, leaving staff feeling vulnerable and afraid.

Upon entering the building on Friday morning, police found copies of the Quran strewn across the floor and the words “moslem terorists” graffitied on the wall. Police are treating the incident as a hate crime.

Muhammed Abdulmuheet, principal at the Newcastle Bahr Academy, said that his staff were afraid to enter the school and even attend the Jumu’ah prayers being held there due to the feeling of vulnerability the attack had left on the staff.

“We don’t know if they want to physically harm us. This has happened so many times now, it is only so long until the building is burned down” Abdulmuheet said.

The Academy was formally the set of a children’s TV programme but since 2010 when announced that it would be converted to a school, it has been targeted repeatedly by vandals with windows being broken and burglaries being a normality.

The former owners of the building have supported Bahr Academy and have raised more than £1000 to help with the cost of the repairs.

“We just want to help them heal” said Anna McGrath, the former director of the programme, “the thought that children have to see this in their school, place of worship and neighbourhood is horrible and has to be traumatising” she added.

Abdulmuheet said that he and the Bahr Academy staff have been overwhelmed by support given to them by the community and that despite the “emotional damage” caused by the attack, he has forgiven the vandals.

“We want to speak to them, and for them to know they shouldn’t be frightened of us. We feel we can’t blame them if they don’t know better. We want to say, let’s talk, let’s educate them on what they have been misinformed of [about us]” he added.

Speaking of the attack, one community leader said ”bigots will be bigots – we need to show compassion. There is a lot of ignorance out there, and hate does not work against hate. It is important we unite and show what true Islam is about”.

In the last three years, there has been a sharp rise in Islamophobia and anti-Muslim hate crime in the UK with 2017 having a record number of attacks against Muslims.

Islamophobic incidents have risen significantly due to a number of factors such as Brexit and the proliferation of far-right groups manipulating peoples’ misconceptions on immigration and faith.