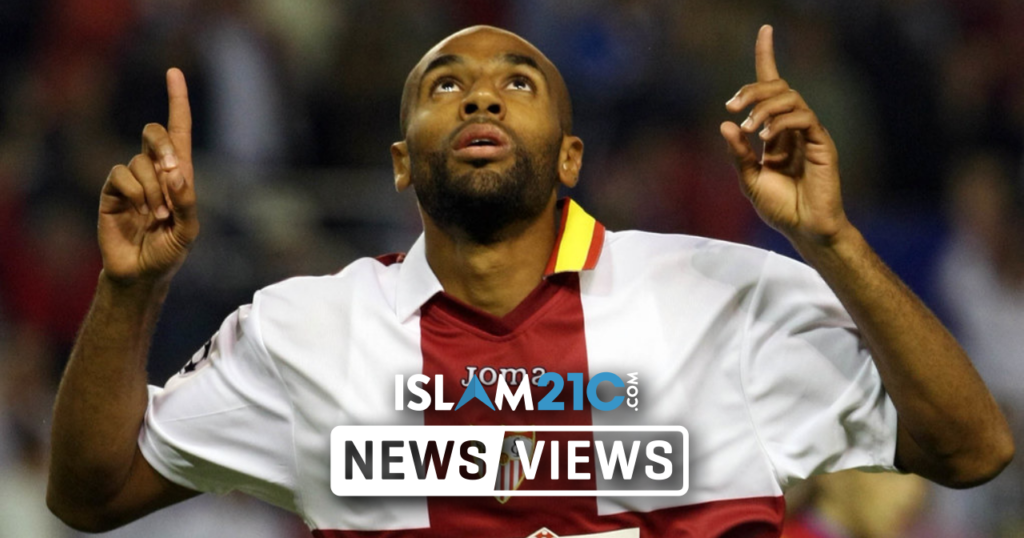 "Kanoute 4" by superleague formula: thebeautifulrace is licensed under CC BY-NC-SA 2.0

Frederic Oumar Kanoute may be best known for his goals for clubs such as Lyon, Tottenham, West Ham, and Sevilla, but now his goals are focused on giving back.

The former professional footballer, who scored his personal best of 89 goals in 209 appearances for the Spanish side of Sevilla, is now leading a campaign to establish the first purpose-built mosque in the city, which has not had a mosque in 700 years. [1]

Kanoute’s relation with the Seville Mosque dates back to 2007. During his seven-year stint with the club, Kanoute paid $700,000 (an estimated year’s salary for the striker) to save the mosque in Seville from closure. Kanoute lent the mosque’s space to the Muslims of the city for their daily usage.

“I helped the Muslim community in Seville a few years back. At the time they were looking to safeguard their place of worship. I helped them to keep their temporary mosque.” [2]

Following an appeal from the Muslim community, Kanoute stepped in to purchase the building after it was due to be sold following the expiry of the contract of the premises. The Fundacion Mezquita de Sevilla remained a place of worship for Kanoute and other Muslims in the city.

The Malian international insisted on his anonymity in the matter, but days later the news leaked all over the media. 2

“I played there for seven years, and as a Muslim the first thing you do when you arrive in a new city is you find a place to pray. The place I found was that mosque, that I call the temporary mosque, that is still there. I found a fantastic community that is shaped not only immigrants – as we always picture the Muslims coming from outside. It’s Spanish or second-generation converts. They’re Europeans, they’re from Andalusia too.

“They were born as Muslims, and there is a fantastic and beautiful mix between Moroccans, Algerians, Senegalese, Malian, and it was just like a beautiful community. That’s the mosque I used to go every Friday and every time I could go.

“In 2007, unfortunately, they got the bad news that they were going to be evicted because the landlord wanted to evict them and rent or sell the property to someone else. I heard about the story at the time and we sat together. We had a little discussion on it and I proposed to help them save the mosque by purchasing it basically.” [3]

Today, the same building is struggling to cope with the growing Muslim population wishing to pray there, and now Kanoute is aiding the cause again.

Maybe you heard I was given the honour to help the temporary Mosque in Seville? Now you too can be part of the FIRST purpose-built mosque in Seville!

The #Kanoute4SevilleMosque campaign began in March of this year, aiming to raise $350,000 to help construct a three-storey, purpose-built mosque with underground parking.

Aided by Ibrahim Hernandez and Luqman Nieto, the president and vice-president of the Fundacion Mezquita de Sevilla, respectively, they hope to create a community hub to support the ever-growing Muslim population of Seville.

Furthermore, they have enlisted the help of other famous footballers such as Watford’s Abdoulaye Doucoure, Manchester City’s Benjamin Mendy, and former Arsenal player Abou Diaby.

“We need them and all the athletes because my link was with football. When you see people retweet or support the project, it helps.”

In the first few weeks of Ramadan, the campaign had reached half its target. Over 8,500 supporters later and with only a few days left, the campaign is in urgent need of raising the money it so desperately needs.

After the reign of Muslims ended in Spain, mosques were either left to ruin or converted into churches. But now, with nearly 1.3 million Muslims in the country making up 3% of the population, Frederic Kanoute and the Muslims of Seville need people to be part of their team.

“One player alone doesn’t win the match. Join us now.”