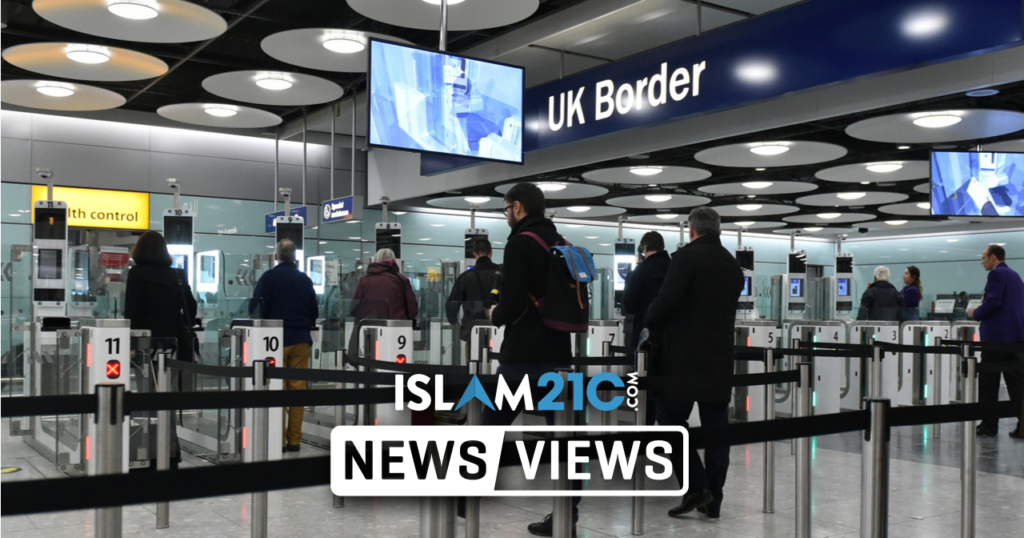 According to the advocacy group CAGE, the detaining of Muslims at UK ports and airports, known as Schedule 7, has become so widespread that it can now be considered an Islamophobic practice.

Schedule 7, officially titled Schedule 7 of the Terrorism Act 2000, is a counter-terrorism power that allows law enforcements to “stop and question, and, when necessary, detain and search individuals” who are travelling abroad. The Government states that this is to determine whether the individual is involved in the “commission, preparation or instigation of acts of terrorism.” [1]

Due to its practice now becoming widespread, CAGE has made a complaint to the policing regulator, the Independent Office for Police Conduct, on behalf of ten individuals affected by the harassment procedure. It is also reported that the organisation has written to MPs on the All-Party Parliamentary Group on British Muslims to “spell out” concerns regarding these detentions. [2]

On 20th August 2019, CAGE released a report containing an in-depth, evidence-based analysis of the counter-terrorism power. Titled Schedule 7: Harassment at Borders, it details academic studies, legal cases, available statistics, and testimonies of those stopped under the power. The report compares the power to other stop and search powers, and lists recommended actions for the Government, civil society, and communities.

In the report, CAGE highlights the difference in the number of stops and the number of individuals convicted from 2009 – 0.007% – and shares incidents of how stops are based on “religious and racial profiling.”

One case study explains how Muslims are made to feel that practising Islām is “wrong”. An unnamed filmmaker who worked for aid agencies described his questioning as a “progression”, with an aim of determining his “religiosity.”

“… I just said, you know, just ask me straight. I said: ‘I know what you are you trying to ask me. You want to ask me if I would do violence to achieve that. I would say no, Islam is an intellectual religion, and it has won hearts and minds and it will continue to do so, so there is no need for violence really.’”

The filmmaker also recalled how he had found a strange folder on his phone that could not be deleted. This, in turn, led him to buy a new one. [4]

Other cases detailed in the report include a British Muslim aid worker, a mother who was stopped on her way home from Mecca, a Muslim revert who wanted to stay with his children, a self-employed Muslim businessman, a father who quoted the Qur’ān to MI5, and even a Muslim revert was asked to strip.

These cases have led CAGE to conclude that Schedule 7 is “problematic” and “counter-productive,” and the organisation has asked the Government to repeal it immediately. [5] Muhammad Rabbani, CAGE’s international director, said that the “discriminations faced by Muslim travellers highlights how embedded Islamophobia is in Schedule 7, and in broader counter-terrorism powers.” [2]

This is not the first time that Schedule 7 has been under scrutiny. Other Muslim organisations – MEND, the Islamic Human Rights Commission (IHRC), and the Muslim Council of Britain (MCB) – have all highlighted the need for ‘reform’ in light of the schedule’s discrimination against Muslims. [6]

Human rights groups such as Liberty and Amnesty International also agree with the need for reform, with the latter saying that the stop and search power “violates any principle of fairness.” [7] In February 2019, the European Court of Human Rights (ECHR) declared the schedule to be “unjust.” This comes as no surprise, as there is a conviction rate of 0.007%. The power to pressure individuals into giving their DNA and passwords for electronic devices, as well as in agreeing to luggage searches and strip searches, suggests that the data of innocent individuals is being retained. This violates the human right to respect an individual’s “private and family life.” [8]

Furthermore, Schedule 7 has been the subject of satire in various media. Most recently, the BBC sketch show Muzlamics highlighted the recurrence of Muslims being detained under Schedule 7. In the sketch, the Muslim characters are seen as being prepared for the questioning, having taking off their shoes and providing documents before being asked. By the end of the sketch, it is revealed that the characters had checked into their flight a day earlier to avoid missing their flight to detention under Schedule 7. [9]

However, a Home Office spokesperson said that “the use of Schedule 7 is vital to the police in their work to combat terrorism” and said that the authors from CAGE are “clearly misrepresenting facts to fit their own predetermined conclusions.” [2]

If you would like to know more about the CAGE report, CAGE will be hosting community briefings in Glasgow on 24th August 2019, London on 30th August 2019, and Manchester on 31st August 2019.