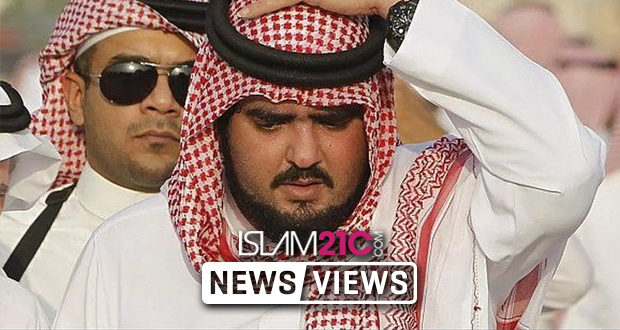 A new crackdown by the Saudi regime has seen the arrests of many prominent figures including several senior royals, one of whom has reportedly been killed.

Several unofficial reports suggest that Prince Abdul Aziz bin Fahd bin Abdul Aziz of Saudi Arabia has died. [1] [2] He is the son of former-King Fahd of Saudi Arabia. The cause of the Prince’s death is still under speculation.

In September this year, there were reports of his alleged detention through house arrest amidst his criticism of the United Arab Emirates (UAE) and calling on Muslims to fight for Masjid al-Aqsa, when it was under severe Zionist restriction.[3]

“O nation of Muhammad and Allah, the third mosque is a prisoner of the criminal occupation, are there no wise among us? Let us go and fight, we would either be victorious and save it, or we fail but will be forgiven by our Lord.”

“Every Muslim is obliged to support our brothers in Palestine and the Holy Al-Aqsa Mosque, everyone within their means. O nation of Muhammad (pbuh), show them who you are. Neglecting Al-Aqsa would be a disgrace and Allah (SWT) will hold us accountable.”

The Prince also pointed out an archived video of his father, condemning the Zionist occupation.

The speculation of the cause of Prince bin Fahd’s death surfaces amidst the arrest of 11 Saudi Officials and the death of 7 other Officials in a helicopter crash. [4] [5]

Senior Saudi Royal, Prince Turki bin Faisal has in the past rejected accusation that Saudi Arabia was moving closer to the Zionist state, saying: “Tell Mr. Netanyahu not to propagate false information.”

“As long as Palestine is occupied by Israel, there’s not going to be cooperation between Saudi Arabia or Sunni states with Israel. That [the Palestinian issue] is the primary issue for all of us in our relationship with Israel.”

It has been two-years since that statement in a fast-developing world and Saudi crown-prince’s idea of “modernising” the Kingdom has been under scrutiny by various writers, public figures and clerics. [6] [7]

Prince Turki bin Faisal is the son of former King Faisal of Saudi Arabia, who is well known for his criticisms against the Zionist occupation of Palestine.