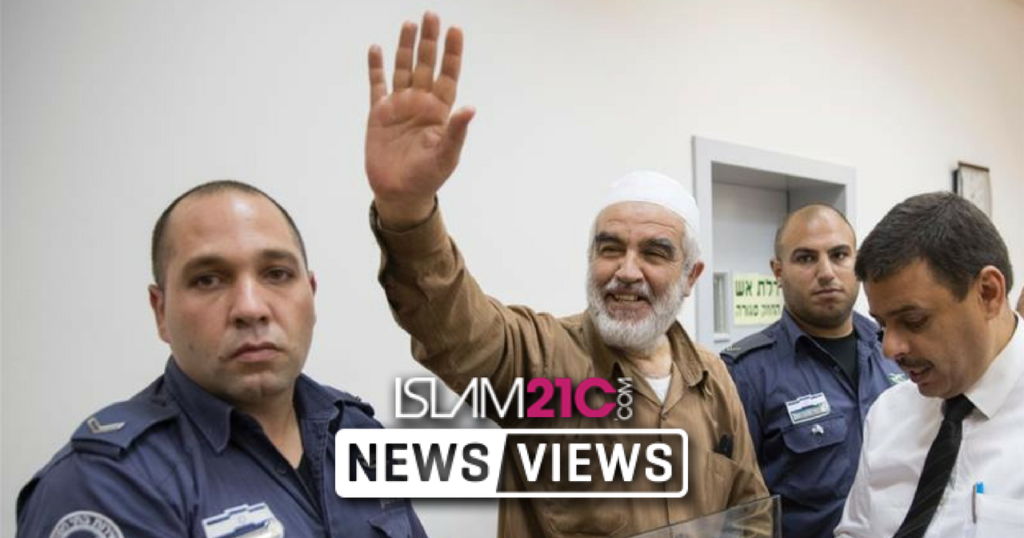 The Sheikh who heads the northern branch of the Islamic Movement in “Israel” was arrested last year under the pretence of ‘incitement’ and imprisoned without a legal conviction.

During his house arrest, Sheikh Salah has been banned from speaking to the press and is only permitted visitation from family.

Despite this, the Sheikh told the press:

“I’m not allowed to talk [right now], but the right time will come in which I will.”[1]

Sheikh Raed Salah is known for his outspoken activism and has been in and out of Israeli prisons throughout his life.

Speaking about her husband’s most recent arrest, Salah’s wife said:

“This is political persecution over his stance on the al-Aqsa Mosque.” [2]

Due to his tenacious stance on the preservation of Al-Aqsa Mosque in Jerusalem, Sheikh Salah often faces friction from the Israeli occupation forces. The Sheikh has been subject to several arrests, travel bans and even assassination attempts by Israeli troops who shot him in the head in 2000.[3]

In 2010 Sheikh Salah participated in the Gaza Freedom Flotilla aboard the Turkish ship Mavi Marmara. The ship, full of unarmed civilians on a humanitarian mission, was notoriously boarded and shot at by Israeli troops who killed nine civilians and injured dozens.[4]

During the illegal Israeli raid on the ship in international waters, reports surfaced that once again an attempt was made on Sheikh Salah’s life.[5]

Even upon his release, Sheikh Salah was put in danger as he was left to find his own way home; potentially exposing him to attacks from Jewish extremists in the Israeli occupied areas he was forced to pass through. However, Sheikh Raed was eventually given a lift to his hometown by supporters he met on the way.[6]

Upon his release, Sheikh Salah was met with a hero’s welcome. Dozens of supporters greeted the Sheikh as he left the court, chanting “We will give our lives for al-Aqsa.”[7] In Kafr Kanna, hundreds of Palestinians celebrated his release waving the flags of the Islamic Movement.

One local said that everyone was overjoyed at the release of Sheikh Salah:

“We’re willing to do everything for the Sheikh. A leader like him should be taken care of and supported. The police and the Shin Bet [Israeli secret police] must leave him alone and stop persecuting him. They should deal with the crime and murders in the Arab society instead. Innocent people are in prison and the criminals are on the loose.”[8]

Sheikh Salah’s resolute stance in support of the Palestinian cause has earned him a massive base of support in Palestine, the occupied lands and abroad. In 1989 he stood for Mayor of Umm Al-Fahm winning with an astonishing 70% of the votes. He was re-elected again both in 1993 and 1997 before stepping down from office in 2001 in order to focus on his activism.[9]