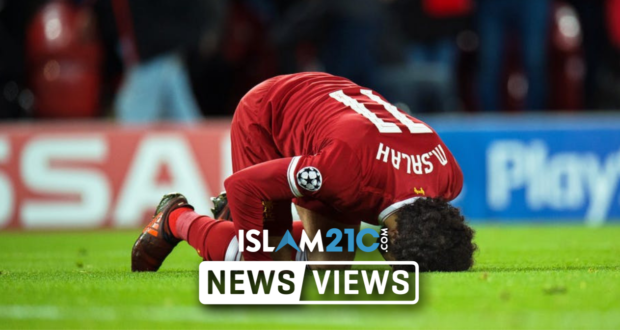 Last week, Mohamed Salah scored the first goal in Liverpool FC’s final match against Tottenham FC, helping his side win their sixth Champions League Trophy and become the best football club in Europe. Little did he realise, however, his impact off the pitch was leaving a bigger impression for Muslims in his team’s city.

Political scientists at Stanford University wrote a report titled Can Exposure to Celebrities Reduce Prejudice? The Effect of Mohamed Salah on Islamophobic Behaviours and Attitudes and found that there was an 18.9% drop in hate crimes in the Merseyside area, the county that Liverpool is in, since Salah was signed compared to the expected rate had he not been signed. [1]

“The survey experiment suggests that these results may be driven by increased familiarity with Islām.

These findings suggest that positive exposure to outgroup celebrities can reveal new and humanising information about the group at large, reducing prejudiced attitudes and behaviours.

Overall, we interpret these results to support the hypothesis that Salah’s arrival at Liverpool FC caused a decrease in extreme acts of bigotry.” [1]

The little Egyptian joined the English side from Roma in June 2017, quickly rising above his teammates in his first season and clinching the PFA Players’ Player of the Year Award after setting the record for with 32 goals scored – the most in a 38-game Premier League season. [2]

In addition to his incredible footballing abilities, his charismatic and friendly persona, as well as his public declaration of his faith, helped to ‘humanise’ Muslims in combination with his public declaration of his faith. Without fail, the striker is seen performing the Islamic act of prostrating to Allāh as a celebration for every goal he scores.

“Salah is often seen joking with his teammates with a signature grin, entertaining his young daughter on the sidelines, and respecting his opponents almost to a fault, for instance, by refusing to celebrate goals against his former clubs.” [3]

With regard to speaking openly about his faith, the researchers wrote:

“By watching games, post-game interviews, promotional videos released by the club, and content on Salah’s social media pages, fans are exposed to rich information about Salah’s life on and off the field. Viewers see what a Muslim prayer looks like, perhaps for the first time, when Salah scores.” [3]

Furthermore, the research showed there was a significant drop in anti-Muslim hate tweets by Liverpool fans compared to other major English clubs.

“We also find that Liverpool FC fans halved their rates of posting anti-Muslim tweets (a drop from 7.2 per cent to 3.4 per cent of tweets about Muslims) relative to fans of other top-flight English soccer clubs.” [4]

Even his manager, Jurgen Klopp, has heaped praise on the striker for continually breaking down stereotypes.

“He’s a role model in so many different things. It’s really, really nice to have him, and Sadio [Mane] as well.” [5]

“We know that’s not true, but it is nice to have somebody around full of joy, full of love and to do what he is doing around his religion.” [5]

Community figures in Liverpool have also noticed the difference. According to Imām Abu Usamah Attahabi:

“Guys like Mo Salah and Sadio Mane, these guys playing at the level that they’re playing football and it gives the world an opportunity to say ‘Ey, Muslims are like everybody else’.” [6]

Mumin Khan, the head of England’s first mosque and the CEO of the Abdullah Quilliam Society, said that Salah “has been an absolute positive role model” in the community. [4]

“He has broken the barriers of negative perceptions that the fans and general public hold about the Muslim community.”

The very humble act of worship that he does on the pitch when he scores a goal has led people to ask ‘what is he doing and what is it about?’

It is about Islām and he has taught people a lot of tolerance and understanding about Islam. Not only is he an iconic player on the pitch but he is also a game changer in the community.” [4]

To summarise, the ‘Salah effect’ is real; a celebrity from a denounced group can actually reduce prejudice towards that group. His record-breaking frequency of goals captured the hearts of his fans, leading to chants celebrating the Egyptian’s Muslim identity.

If he scores another few
then I’ll be Muslim too.

He’s sitting in the mosque
that’s where I wanna be.

Being that Salah-like figure at your school has correlated to a profound impact in challenging negative stances many can adopt, whether it may be in the workplace, on the streets, or even in the town centres. However, by having the right people representing us in the media, integrating in the right way, and spreading the positive messages of Islām, with an easy-going personality or even a daily habitual task such as smiling and joking, can help to raise awareness of actual Islām and be credited into combating billions of dollars spent in manufacturing and sustaining Islamophobia.

Although Government reports have found that Muslims are among the most disadvantaged people in the UK, the research said:

“The public image of Salah as a hero of sorts, and the resulting normalisation of some Muslim identities’ practices, may have dampened the appetite for harassment and violence toward the city’s Muslims.” [7]

By shifting the perceptions of how large crowds of Liverpudlians think about Islām and Muslims, it is clear to see that as his goals have won games and trophies, his charming presence has slowly made Liverpool, for Muslims, a safer and better place.

How Islamophobia will destroy British politics