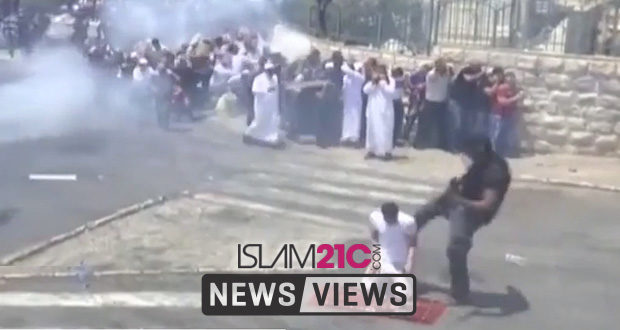 Turkey’s president Erdogan has condemned Israel after its recent restrictions on Masjid al-Aqsa, in a written statement.[1]

It is unacceptable that Israel shut down Haram al-Sharif for three days and imposed new restrictions, including metal detectors, on Muslims’ entry to the area citing an incident, which is not approved and is regretted by us, that took place on July 14 in East Quds which Israel has been occupying since 1967.

In my capacity as term president of the Organization of Islamic Cooperation, I condemn Israel’s insistence on disregarding all warnings to maintain its position, the inability of Muslims to perform the Friday prayers at Haram al-Sharif once again yesterday, and the use of disproportionate force by the Israeli forces against our brothers and sisters who gathered for the Friday prayers.

I pray that Allah have mercy on the three Palestinians who lost their lives during this event and wish a speedy recovery to the injured.

I would like to add that we are against all forms of violence.

Haram al-Sharif, which was Islam’s first qibla and remains one of its three most sacred masjids, is a temple that belongs to Islam.

The Organization of Islamic Cooperation was established in 1969 in the wake of an attack against Haram al-Sharif.

Today, the entire Islamic world shares the same spirit of unity and solidarity and stands with our Palestinian brothers and sisters.

We will continue to support efforts being carried out in coordination with the al-Quds Islamic Waqf along with Palestinian President Mahmoud Abbas and King Abdullah Il Of Jordan. Israel has a legal obligation to respect the sanctity and historical status of al-Quds and Haram al-Sharif.

Metal detectors and other restrictions must be lifted immediately and the current status quo must be restored.

As this sensitive process unfolds, we urge everyone to remain alert regarding acts of provocation.

As term president of the Organization of Islamic Cooperation, I call on the international community to take action in order to ensure that all restrictions on freedom of worship at Haram al-Sharif be removed immediately.

He also added, addressing reporters on Sunday before departing for a visit to Saudi Arabia, that “no one can expect the Islamic world to remain unresponsive after the humiliation Muslims suffered with the restrictions at the Noble Sanctuary.”[2] Urging for Muslim unity, he said:

“We do not find our brothers experiencing trouble and distress right by any means, and we are deeply saddened by the latest incidents. Today, as Muslims, we are in a period where we should be closely united and close ranks more than ever. The trouble, the suffering in Syria, Iraq, Libya, and Palestine are obvious. Unfortunately, new problems are being added to existing ones every day. What happened at Al-Aqsa in the sight of the world is an example of this,”[3]

Previous: Infrared Security Cameras Instead of Electronic Body Scanners in al-Aqsa?
Next: “Reforming” Islam to suit popular culture is a bad idea