Do you know Al-Aqsa? 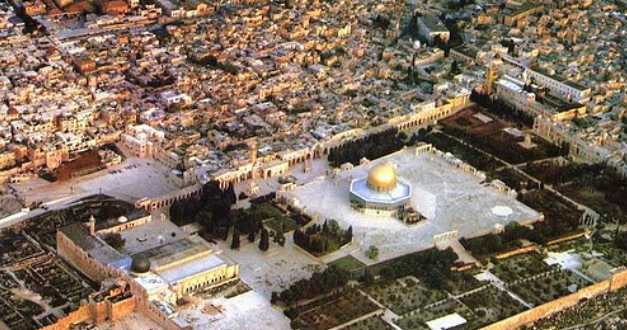 We occasionally get asked why we show the image of the Dome of the Rock (Qubbat as Sukhra) when we are discussing or promoting the issue of Masjid al-Aqsa. It is asserted that this causes confusion in people’s minds about what Masjid al-Aqsa actually refers to. This response intends to help resolve the confusion:

Q. What is Masjid Al Aqsa?

A. There is a common misconception that Masjid Al Aqsa refers specifically to the black/grey domed masjid within the Al Aqsa Sanctuary, however this is incorrect. Allah (swt) reminds us in the Holy Qur’an that He has blessed the land for us therefore according to Islamic teachings, ALL the buildings within al-Aqsa Sanctuary and the entirety of the land are sacred right down to every single grain of sand within it and when we refer to ‘Masjid al-Aqsa’ it is not to any of the specific buildings upon the land, but rather, the land itself upon which the Dome of the Rock and the black/grey domed masjid stand.

Thus, references to the al-Aqsa Sanctuary/Masjid al-Aqsa are interchangeable terms, and neither refers to the grey/black domed building within the land which is routinely referred to as Masjid al-Aqsa but should be Masallah al-Aqsa (Qibly). It is this common usage of terms that has confused people.

There are 44 buildings within the Al Aqsa Sanctuary, including the black/grey domed masjid and the Dome of the Rock (Qubbat as Sukhra). These buildings have historic significance for Muslims, however, they were built some time after the passing of the beloved Prophet (saw).

Evidence from the Qur’an

Our love and dedication to the heritage of Masjid al-Aqsa is inspired by verses of the Holy Qur’an, from numerous ahadith and historical events that took place there.

Limitless is He (Allah) Who took His servant for a journey by night from the Sacred Masjid (in Makkah) to al-Aqsa Masjid (in Jerusalem), whose precincts We have blessed, in order that We might show him some of Our Signs: for He is the One Who hears and sees (all things).

The relevant text in the passage is “Whose precincts We have blessed”. It is clear from this verse that Allah (swt) has blessed the land of Masjid al-Aqsa.

“Blessed land” under the Islamic ethos means land associated with barakah –land Allah (swt) has endowed spiritual and physical blessings from which all of humanity can derive benefit. The barakah also extends to the people who reside within this land, on condition that they confirm to the commands of Allah (swt), i.e., practice Islam.

The Boundaries of the Blessed Land

The boundaries of this “blessed land” are not clear and there are differences of opinion about its exact extent. Some classical Islamic scholars of the Qur’an and a hadith including Ibn Kathir, al-Qurtubi and Ibn al-Jawzi consider the whole area of al-Sham (modern day Lebanon, Syria, Jordan and Palestine) as blessed. Other interpreters believe that the blessed land is contiguous from the Hijaz (Saudi Arabia) through al-Sham to Egypt. A further, and maybe a more logical opinion, is that within the area of the modern Middle East, there are pockets of “blessed land” like the compound of al-Aqsa Sanctuary, the Prophet’s (saw) Masjid in Madinah and the Holy Masjid in Makkah. However, in all the opinions on the extent of the “blessed land”, al-Aqsa Sanctuary is included.

The city of al-Quds (Jerusalem) now extends over a 45 square kilometre area. Within al-Quds, there is the ‘old city’ where major historical events took place and within the old city on the southeast corner is the area referred to as al-Haram al-Sharif or al-Aqsa Sanctuary.

Al-Aqsa Sanctuary covers an area of approximately 35 acres and within this area, at the southern end, is the black/grey domed Masjid the Masallah al-Aqsa (Qibly); in the centre lies the golden domed Masjid, Qubbat al-Sakhrah (Dome of the Rock) and there are within al-Aqsa Sanctuary 42 other monuments and buildings. It has become common practice to refer to the whole area simply as al-Haram al-Sharif (al-Aqsa Sanctuary) and the black domed Masjid as ‘Masjid al-Aqsa’.

Who constructed or commissioned the buildings within the Al-Aqsa Sanctuary?

When the first Caliph ‘Umar (ra) entered al-Quds (Jerusalem) he requested first to be taken to al-Haram al-Sharif (al-Aqsa Sanctuary). When he arrived there, he was laden with sorrow to see that the Romans had been using the Holy Sanctuary as a rubbish tip. He immediately began clearing of the site, and once cleared, he ordered the construction of a Masjid at the southern end of the sanctuary. This was originally a wooden structure and was later re-built as a solid structure by ‘Abd al-Malik’s son al-Walid (Caliph 705-715). Today, the black dome of Masallah al-Aqsa (Qibly) stands there.

ah (Dome of the Rock) in 72-73 AH (691-692). The reason for building this architectural wonder of the world has drawn many hypotheses. However, to most Muslims it is logical for such an endeavour of magnificence to have taken place in al-Quds (Jerusalem). As it is the site of the most miraculous event in the life of the Prophet Muhammad (saw) – al-Isra wa al-Mi‘raj –coupled with the many ahadith exalting the virtues of al-Aqsa Sanctuary and the fact that it is mentioned in the Holy Qur’an. ‘Abd al-Malik, himself a renowned jurist, being aware of all these great virtues, decided to commemorate the Islamic heritage of the area, and undertook the grand project of building the magnificent dome over the rock.

It is extremely important to appreciate that it is the land of al-Haram al-Sharif (al-Aqsa Sanctuary) that is the most precious and blessed. When the Holy Qur’an (in Surah al-Isra’) refers to Masjid al-Aqsa (meaning a place of prostration), it is this land of al-Haram al-Sharif (al-Aqsa Sanctuary) that is implied and not any of the buildings. Therefore, all the buildings that stand within the al-Aqsa Sanctuary are all of equal worth and importance, including the black domed Masallah al-Aqsa (Qibly) and golden Dome of the Rock (Qubbat al-Sakhrah), however, one must understand it is the land that is Holy and Blessed and not the bricks and mortar.