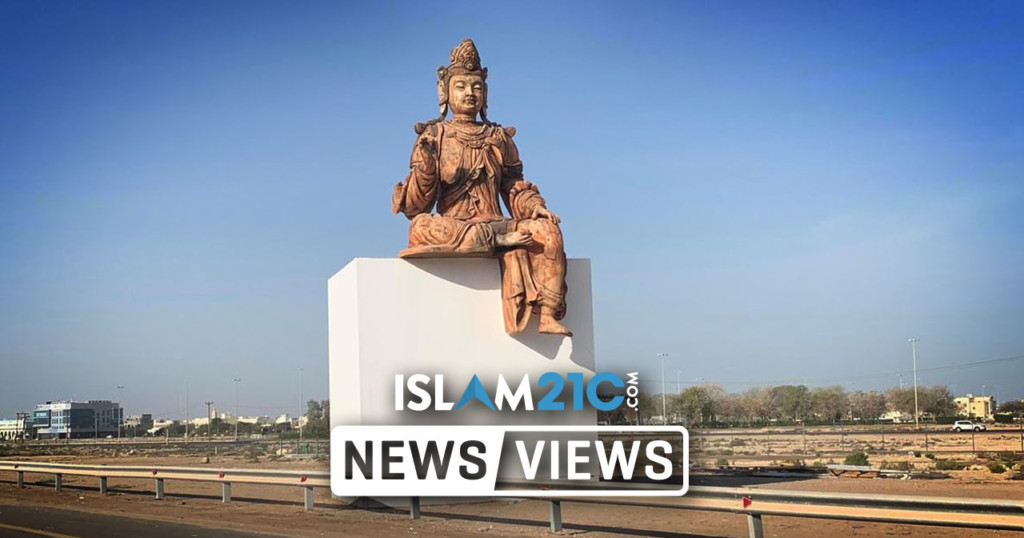 The installation of the 10m-high Buddha statue follows the opening of a Hindu temple by the UAE prince.

A 10m-tall statue of Buddha has been installed on one of the main highways connecting Dubai and Abu Dhabi. The installation is part of the Louvre Abu Dhabi exhibition, and the introduction of this Buddhist monument follows the opening of a Hindu temple by one of the princes of the UAE.1  These moves have been described by some as unprecedented steps towards “polytheising” the region.

Although the statue is already installed on the Sheikh Zayed Road, the launch will take place on April 7th and will be part of the so-called Highway Gallery’s second edition. A total of ten pieces, dubbed ‘artwork’, will be installed on the road in the days to come, and will be seen by thousands of road users.

The installation of the Buddhist statue comes a year after an Emirati prince inaugurated the opening of the UAE’s first Hindu temple in Abu Dhabi, as well as the visit by Indian prime minister, Narendra Modi, in February 2018.2

These recent acts by the Emirati government have been interpreted as overtures to the Hindu nationalist government of Modi in India, and possibly further East, and show the UAE’s desire to accrue foreign investment and business in the Muslim Gulf Nation. Muslims across the world censured the Emirati regime for cosying up to a nationalist government in India, responsible for the aggressive rise of Islamophobia and mass discrimination against Indian Muslims.

In a video uploaded by Al Masdar TV, the Emirati Prince is seen walking between a crowd of Hindu worshippers, many of whom are bowing down to touch his feet. Later on, he addresses the crowd in the Hindu temple, starting off by saying “jai shri ram” – a term used to eulogise the Hindu deity, as well as the Hindu priest known as ‘bapu’.3

It has been noted that the consecration of statues, be they Buddhist, Hindu, or claimed by any polytheist, as well as the public statements endorsing them, are considered major contraventions to the very foundations of Islam by agreement of Muslims who follow a firmly Abrahamic, monotheistic tradition. This includes laying temple foundations, consecrating places of idol worship, or promoting them.

How the Emirati, and other Gulf governments, managed to mix between proselytising that they are the champions of Tawhīd, or monotheism, whilst doing what Muslims agree contravenes Tawhīd has baffled Muslims. The regime has, however, long promoted an Islamic discourse and narrative that holds Muslims unreservedly obedient to their rulers and opens no room for legitimate criticism. Regime endorsement, alongside the widescale crackdown on Muslim scholars has helped proliferate such discourses on television screens. Some have even claimed that obeying the ruler is even necessary if he fornicates live (on television) for half an hour every day or drinks alcohol, drawing waves of criticism.4

However, Emirati media and news outlets have celebrated the statue as ‘art’ and papers such as The National and Khaleej Times have linked these recent moves to progressivism, tolerance, and compassion. This so-called civil ‘progressivism’ has not been the fortune of the Yemenis, whose nation has been sent back to the stone age through the UAE’s relentless and bloody campaign. Through this, some 80,000 Yemenis have lost their lives, around 20 million are now at the risk of starvation, and 250,000 are facing “catastrophe”, according to the UN humanitarian chief, Mark Lowcock.4

Rampant abuses and human rights violations have even been recorded inside the UAE’s borders. Thousands of expatriate workers, most of whom are ironically from India, are exploited and abused, despite the fact that foreign nationals account for more than 88.5% of the UAE’s population.5

These events in the UAE retell how idol worship was introduced into the city of Makkah and the Arabian Peninsula. As Ibn Kathir chronicles in al-Bidāya wal-Nihāya, prior to the introduction of idolatry, the Arab Peninsula was following Abrahamic Monotheism. This continued until a man by the name of ʿAmr b. Luhay introduced the act of idol worship to the people of Makkah and the surrounding areas.6

According to historians, ʿAmr b. Luhay left Makkah for the city of al-Balqa in the Levant (Shām). Upon his arrival, he saw a group of people, known as al-Amalīq, worshipping idols and enquired as to what they were doing. They explained to him that they pray to these idols, imploring them for rain and victory, and that the idols would answer their calls. Amazed at this, ʿAmr asked if the people could give him one idol and they did, and so ʿAmr took this idol with him and travelled back to Makkah.7

Upon his arrival in Makkah, people enquired about his experience. Thus, ʿAmr was able to convince the people of Makkah to alter their monotheism, to that of associating partners alongside Allāh’s worship. It did not take long for ʿAmr inception of polytheistic practices to make way, paving a new era of idolatry in the Arabian Peninsula. 6 During the eventual conquest of Makkah, the Prophet (sall Allāhu ʿalayhi wa sallam) removed around 365 idols standing in and around the very Kaʿbah that Muslims circumbulate  today, bringing back  Abrahamic monotheism throughout Arabia.

In an explicit and authentic Hadith,8 the Prophet Muhammad (sall Allāhu ʿalayhi wa sallam) later saw ʿAmr being dragged through the hellfire as punishment for introducing Shirk into the city of Makkah and the Arabian Peninsula.6 Allāh also says in the Qur’ān:

“…So, avoid the uncleanliness of idols and avoid false statement. Be people of pure natural belief in Allāh, not associating anything else with Him. As for anyone who associates others with Allāh, it is as though he had fallen from the sky, and the birds had seized him and carried him away or the wind had dropped him in a distant place.”9

[8] Hadith: Muslim on the authority of Abu Hurairah