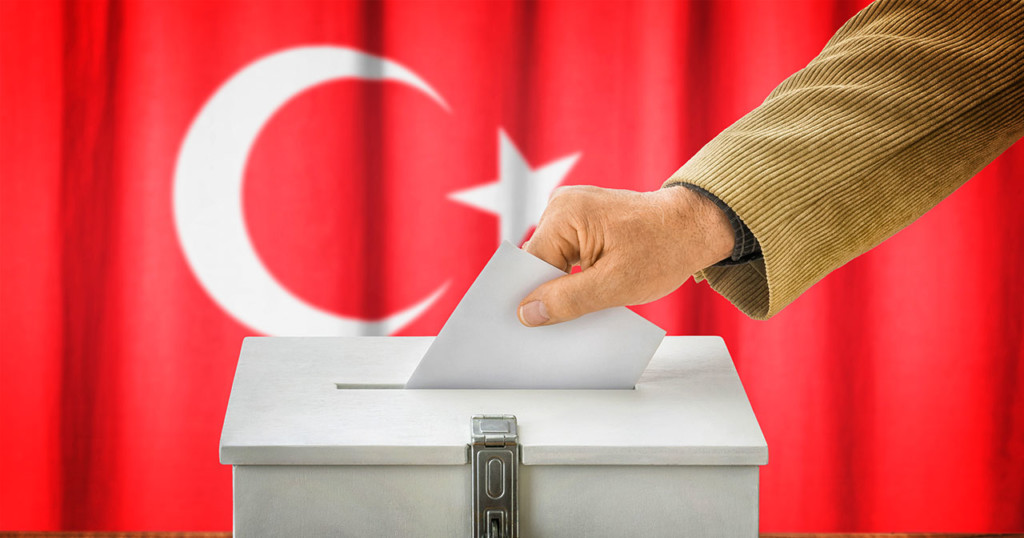 On Sunday 31st of March, millions of Turks voted in Turkey’s local elections. In the contest for over 30 metropolitan and thousands of districts, provincial, and municipal councils, Turkey’s governing Justice and Development Party (AK Party) came out on top, Alhamdullillāh, and did so despite concerted smear campaigns and economic harassment. The AK Party took control of 56% of all Turkish municipalities. However, whilst every election comes with its own surprises, at least three consistencies appear in each without exception.

Many want to see the downfall of the AK Party, regardless of their replacement.

It is the 15th Turkish election and the AK Party pretty much dominated. Most Turks did not buy into the media’s economic horror tales, brandished an institutional “economic crisis”.[1] Fortunately for them, Trump, had been vocal about his administration’s aim to “devastate Turkey’s economy”.[2] The halfwit sloppily left no room for the Turks to suspect that their government, who had been re-elected 14 times already, was beginning to institutionally fail. They knew Turkey simply needed to weather just another thuggish Trumpism, now targeting its economy. True enough, it was a wipe-out win. The AK Party’s clear majority in the overall mayoral race was just 1.1% below their 2014 results, with its rival increasing their share by a meagre 0.6%.

Even in spite of the AK Party’s 14% dominance in the council elections, as well as having won in Ankara and Istanbul, you cannot help but be impressed by Western media’s frantic titles regarding the results: “Erdoğan has been chastened by the election results”[3]; “The beginning of the end for the Erdoğan era”[4]; “Erdoğan’s big Turkish ambitions could come tumbling down”[5]; “Is Turkish poll shock the beginning of the end for Erdoğan?”[6]; and other obsessively fanciful headings.

What catches the eye, perhaps more than the usual Islamophobic culprits, are those from the political left who yearn for the “beginning of the end for Erdoğan”.[7] Other than the typical Erdo-bashing, the article is written with a stark, celebratory tone for the wins of the People’s Democratic Party (HDP) and the Republican People’s Party (CHP). It calls the leader of the former, “charismatic” and the latter, the ”veteran” Kemal Kılıçdaroğlu “who survived endless AKP ridicule and intimidation.” [8] The article ignores the CHP’s campaign message protesting the AK Party’s spending on vulnerable Syrian Refugees[9], and even their partners’ promise to “send 4 million Syrian refugees back to Syria”[10] altogether.

Regrettably, it sometimes feels as if criticising the AK Party is the Western media’s united cause. Those who support the now anti-Syrian Refugee CHP will simultaneously lambast our own shameful response to the Syrian Refugee crisis,[11] whilst knowing that Turkey, under the AK Party, hosts the most Syrian refugees in the world and has spent around $35 billion dollars (£27 billion) helping and sheltering them.[12] This is approximately 2000 times more than what the UK government has dedicated to the Syrian Refugee Relocation Scheme.[13]

For them, if the election results mean the end of the AK Party, despite the transformational effect they have had on Turkey in the last 15 years, as well as their incalculable humanitarian support, then they will celebrate their successors, irrespective of their policies. However, Turkey’s President did not appear from an abyss. He originates from the Islamic AK Party, who happens to lead an Executive Body, a Parliament, and multiple councils and local leaders.

Fundamentally, they have all been elected by a nation who holds that Islamic inclination and persuasion. Attacking the AK Party will seldom change that reality. The media’s eagerness to see the “end of Erdoğan” may be just as eager to see an end to whoever picks up his reins. Though, judging by the country’s 620-year Islamic heritage which was spotted by very short spates of violent secularism, it may not be worth the trouble waiting.

Turkey is a seriously energetic, healthy and fair democracy.

Several analysts in the Guardian, the Middle East Eye and others are now emphatically making this point[14] [15] [16] despite it being one we made repeatedly, years ago, on Islam21c.[17]

Today, the insinuation seems to be that Turkey only became an admirable democracy when the elections dealt “a major setback for the president…and his ruling alliance.”[18] Many propagandists recently called Erdoğan a “dictator in all but name”,[19] and argued that the country’s now admirable democracy has paradoxically bred something of an absolutist regime. Despite the double-standard, this is a reason to be optimistic about these results. If nothing else, Turkish opponents can now officially see the nation as a democracy for the next time a party with Islamic tendencies wins a referendum or election.

It may be worth a reminder that it was the AK Party – i.e., the ‘Islamic’ party – who formed Turkey’s functional democracy to begin with, reassuring its electorate that the era of military coups ended with the July, 2016 fifth coup attempt. It is, thus, from a position of strength and decency that it opens the floor to candidates from all backgrounds and persuasions. Nothing of the like that was established by the post-Ataturk – ultra-secular goons who tussled over power and swam in financial corruption.[20]

As well as this, Turkey’s democracy is energetic. It is euphoric and engaging. People are rigorously connected with its candidates, and are fully engaged with their policies and personalities, as government advisor Yasin Aktay argues.[21] We forget that the nearly 85% of the voter turnout was for a local election, not a general one. Many of us in the UK only notice upcoming elections when rummaging through our takeaway menus! Local government elections in the UK see turnouts closer to 30%! How many of us can even name our Local Councillor? Statistically, the Turks are in fact more engaged with their Local Elections than us in our General Elections. There appears to be a lot of work we need to do in the UK before we can give lessons in democracy to Turkey, as implied by AK Party spokesman, Ömer Çelik:

“Dictatorships with no democratic track record or less than 10 percent voter turnout have no right to criticize Turkey’s elections.“[22]

The AK Party’s only realistic alternative is fatally secularist, and hugely detrimental.

You have seen it again and again. The party in first place is the AK Party, and in second place is the Kemalist, and regimentally secularist CHP, who have a history of outlawing Islamic practices (like the Hijab and Adhan) or any party that veered too close to Islam.

The AK Party may not resemble the idealistic recollection of Ottoman Turkey under the Khilāfah. Its pragmatism, or what supporters would call ‘realism’, is seen by many Muslims as ‘selling out’ on core Islamic principles. For the time being, let us address this with two points:

If you last booked an affordable package holiday to Turkey, can you honestly say it was not to one of the ‘red’ destinations—including Antalya, Izmir, Karaman, Istanbul—in the results map below?[23] Most of these resorts, maybe unsurprisingly, happen to be CHP hubs. After visiting these areas, many non-Turkish, Muslim critics of the AK Party will draw judgement on its secularity. In comparison to this, much of the north coast, governed by the AK Party, is frequented by conservative Muslims and has an utterly different atmosphere.

Some may ask that surely if the AK Party is in a position of power, can they not do more to urge an immediate application of all aspects of Islām or impose it? Even if we were to agree this is the ‘correct’ Islamic approach, irrespective of the existing secular climate in many areas, the AK Party may have never entered parliament, let alone govern. Down at sixth place is the Felicity Saadet Partisi Party, securing a tiny 2.7% share of the last vote.[24] Though the AK Party shares roots with the Felicity Party, the latter’s ‘all or nothing’ approach, vision and strategy has proved undeniably incompatible with present-day politics. The clear re-emergence of the CHP, and the current standing of the Felicity Party, after years of its existence, testify to this. In fact, if only a quarter of AK Party supporters were swayed by Erdo-bashers to the favour of what is deemed ‘the more Islamic’ alternative (the Felicity Party), we will have given Turkey back to the ultra-secularist Kemalists for sure. 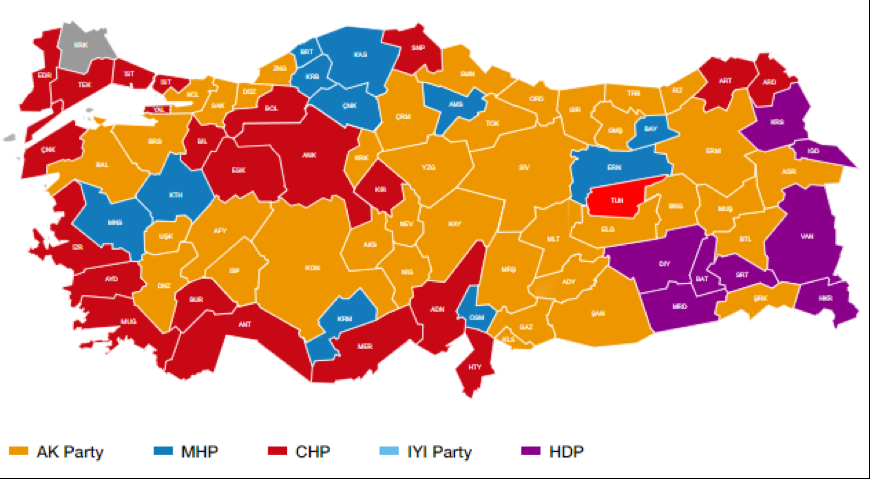 Thus, it is imperative that Muslims look at Turkey from this lens. The AK Party’s model may not fit some Muslims’ utopian view of the Ottomans, nor will a holiday to Bodrum echo episodes of the Diriliş Ertuğrul television series. Turkey is, however, embarking on an extremely positive trajectory in the favour of Islām, one that has brought immense benefits to its citizens and the Muslim world. The polar opposite lurks like a ghost in second place, and this challenge will not simply be fixed overnight.