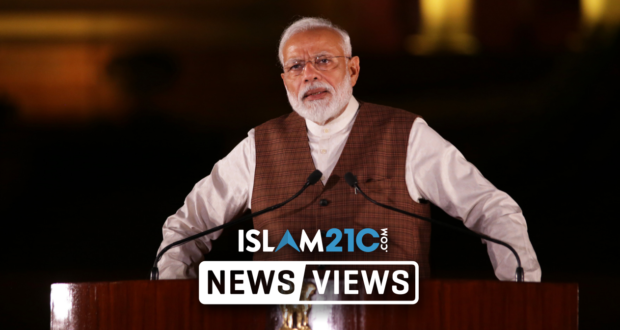 UAE rolls out red carpet for “butcher of Gujrat” Modi

Muslims around the world have hailed Qatar’s decision to withdraw its signature from a letter it signed last month alongside 37 countries expressing support for China’s repressive policies in East Turkestan. As many as two million ethnic Uyghurs are currently being held in detention centres akin to concentration camps.

According to human rights organisations, millions of Uyghurs (and other Muslim minorities mainly from the East Turkestan region) are being held in a vast network of concentration camps in China undergoing alleged political rehabilitation. Beijing says these “education centres” are necessary for countering religious extremism, but reports have emerged of physical and mental torture, children being forcibly separated from their parents, and many forced to denounce their religion and pledge loyalty to the Communist Party.

Despite widespread international condemnation, dozens of countries sent a joint letter to the President of the UN Human Rights Council and the UN High Commissioner for Human Rights, expressing their support for China. The letter, signed by Saudi Arabia, the United Arab Emirates, Egypt, Pakistan, Russia, and several others,[1] absurdly commended “China’s remarkable achievements in the field of human rights” whilst ironically opposing the practice of “politicizing human rights issues.”[2]

Activists have criticised the manoeuvre by these countries as a political evasion of questions on their own human rights records, with the Gulf signatories responsible for the war on Yemen that has created the worst humanitarian catastrophe in recent history and the incarceration of dozens of scholars and activists. The Egyptian coup regime, on the other hand, is thought to have incarcerated no less than 60,000 pro-democracy activists in some of the world’s most dire and unliveable conditions, the same justification it has afforded China of countering “terrorism and extremism.”

Almost exactly a month after endorsing China’s repressive policies in East Turkestan, the UAE awarded Indian Prime Minister Narendra Modi the highest civil decoration, the ‘Order of Zayed’.[3] The government led by the BJP, a Hindu extremist party, recently stripped Jammu and Kashmir of its special status, revoking Article 370 that had given the Muslim region semi-autonomy.[4] Jammu and Kashmir is known as the most militarised zone in the world.[5]

In July, a 43-page report released by the Office of the United Nations High Commissioner for Human Rights (OHCHR) documented grave human rights violations, including the killing of dozens of civilians at the hands of Indian troops and various forms of arbitrary detention.[6]

The UAE repealed its own values and Islamic ideals in favour of economic ties by inaugurating Hindu temples and Buddha idols on its main highways.[7] The ‘Order of Zayed’ award, handed to the ultra-nationalist Indian prime minister on the 24th of August, has been branded “a total disregard of human rights in favour of economic ties.”[8] Many have reasoned that it only adds insult to injury on top of UAE’s endorsement of East Turkestan’s concentration camps. It remains to be seen how far the UAE is willing to go in forgoing the causes of Muslims around the world.