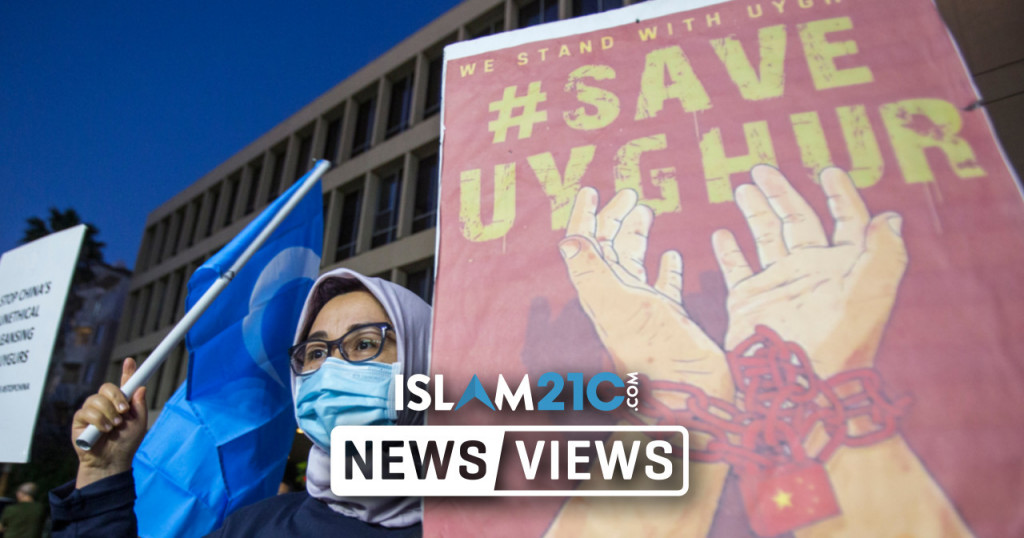 As day two of the second set of testimony gathering sessions concluded, the Chinese government continued to claim that the Uyghur Tribunal is using “lies of a bunch of anti-China ‘scholars’ and ‘actresses and actors’ to fool the public”. The ruling Communist Party’s mouthpiece and sham news chronicle known as The Global Times made a feeble attempt to challenge the current proceedings. It sought to discredit the chair of the Tribunal, who is none other than veteran human rights barrister Sir Geoffrey Nice QC. In addition, despite being asked on multiple occasions to attend the commission, China has seen fit to play the victim in a genocidal world which it is deeply implicated in. [1]

One of the concentration camp survivors who gave evidence on Saturday was 44-year-old Abdusalam Muhammad. He described in great depth the level of allegiance demanded of him and other detainees by their Chinese captors, and the arbitrary nature of the ordeals they all had to face.

“…we had to admit what we had done wrong (although we did not do anything wrong) and thank the Communist Party for showing us the right path, praising the Communist Party for giving us everything we needed, condemning ourselves for not being loyal to it, and admitting Xinjiang (East Turkistan) has been an inseparable part of China for a long history.” [2]

Saturday’s witnesses also included Julie Millsap, the Director of Public Affairs and Advocacy at Campaign for Uyghurs; Yonah Diamond, an international human rights lawyer who specialises in political prisoner advocacy and atrocity prevention; John Packer, professor of international conflict resolution at the University of Ottawa; Darren Byler, a sociocultural anthropologist who is an assistant professor at Simon Fraser University in Canada; and Rahima Mohammed Nuri, a former nurse who witnessed hundreds of Uyghur forced abortions during her work at a hospital in Hotan city between 1999 and 2000. [3] [4] [5] [6]

In shocking detail, Abdusalam explained to the fact-finding panel how he and other fellow inmates were allowed just a single visit to the washroom every 48 hours. To make matters worse, prisoners were appallingly expected to urinate in a bucket in the interceding periods. Abdusalam shared with the Tribunal his harrowing memories of the awful stench that was so nauseating that it caused “runny noses or nasal infections”, especially since there was “no cover for the bucket which we used as a toilet”. [2]

“…every 48 hours, when we were in line for the washroom, the Han police stood where there was no camera and, they kicked us forcefully at our backs with hatred, we were not allowed to look back, we had to lower our heads; it was worse than the Nazi camps. We had seen Nazi camps in the movies before, they could talk to each other. We were not allowed to talk or whisper to each other or look at one another.” [2]

China has been quietly developing a vast concentration camp system in East Turkestan (or Xinjiang, which is the name preferred by the Chinese state and media) for the past decade. Satellite images continue to show rapid expansion in existing prisons, which are labelled as “Vocational Education and Training Centers” by state broadcasters. Documentary evidence of systemic gang rape, forced abortions, slave labour, and a myriad of other genocidal abuses have been produced. However, the international community continues to falter in its efforts to adequately counter the Chinese Communist Party’s brutal Nazi-esque acts against the majority Muslim Uyghur population.

Some progress has been realised in the last few months. Countries such as the UK, US, Canada, and the Netherlands have all agreed – in their respective legislatures or executive branches of government – that the Chinese authorities are actively committing genocide against the Uyghurs in Xinjiang. [7] [8] [9] In March, a number of EU member states implemented sanctions against individuals with alleged links to grave human rights violations against the Uyghurs – including Chen Mingguo, the director of the police force responsible for Xinjiang; Wang Mingshan, who “holds a key political position in charge of overseeing” the detention of Uyghurs; Wang Zunzheng, the party secretary of the Xinjiang Production and Construction Corps (XPCC), which has been described as the modern day East India Company; and Zhu Hailun, a former deputy Communist Party chief, who is accused of holding a significant position in supervising the operation of the detention camps. [10] However, much more needs to be done to force China’s rulers to cease their gross atrocities against the Uyghurs.

In written evidence shared during Saturday’s session for the Tribunal, Julie Millsap made a powerful point that “education is viewed both as a tool of genocide and as a threat to its performance”. [3]

As such, Millsap argues that:

“Since the inception of genocide as a concept, education has been a central question for regimes aiming to conduct ethnic cleansing. Education is viewed both as a tool of genocide and as a threat to its performance. It is a tool largely in the cultural genocide that accompanies physical destruction. The education of future generations is the easiest way to eradicate from their minds the cultural realities of their people, and replace those ideas with those approved by the regime set on their destruction.” [3]

She further noted the importance in differentiating between mass murder and genocide, as the distinction between the two is beyond comparison. In addition, it is evident that China is intent on completely eradicating Uyghur culture and identity through its aggressive education programmes.

“Because, under the definition as originally conceived by Dr. Raphael Lemkin following the Holocaust, there is both a physical and a mental element to a genocide. The erasure of a people physically is then accompanied by a targeted erasure mentally of the memory of their culture and identity. Since education, both formally and informally, is where these memories are originally built, it is then the origin point of this identity. The origin point then, is the point at which this identity can be targeted for destruction most effectively.” [3]

At the close of the second batch of data gathering sessions, the Uyghur Tribunal’s members are expected to deliberate over the evidence and thereafter release a statement of facts to the public. It is envisaged that several governments, which include the US, UK, Canada, the Netherlands, and many more will take further substantive steps to discipline China on the world stage. Even countries such as Pakistan, which until now has been unwilling to directly criticise the CCP due to trade commitments, may take a bolder stance after the Tribunal delivers its verdict.