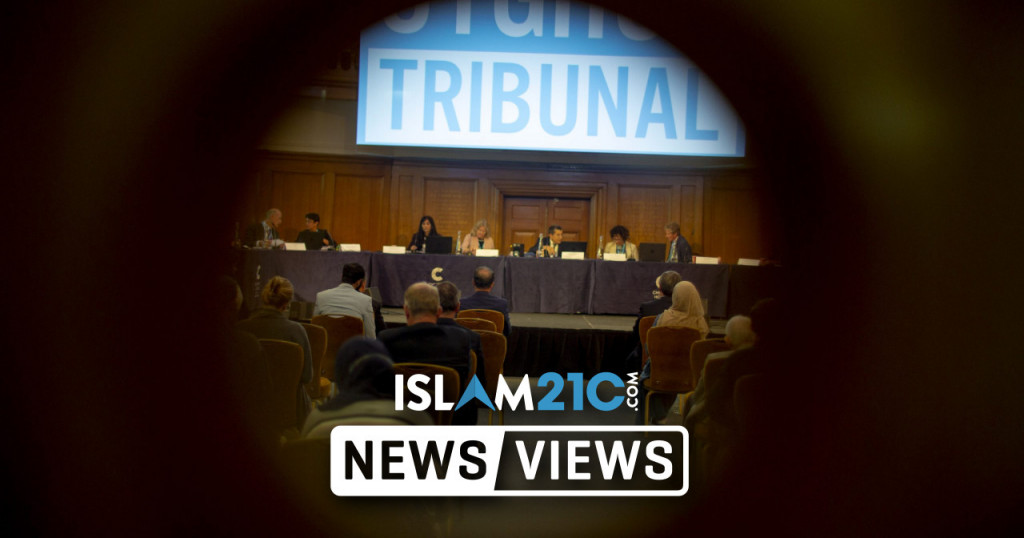 The second stage of the groundbreaking Uyghur Tribunal commenced yesterday in Westminster, London. Part two of the unprecedented human rights commission – which follows the initial batch of evidence gathering in June earlier this year – has so far heard first-hand and indirect testimonies from ethnic Uyghur witnesses Mehray Mezensof and Dr Khalmat Rozahun. [1] [2] [3] [4]

27-year-old Mehray Mezensof is the Australian wife of Mirzat Taher, who was first arrested by the Chinese authorities in April 2017. Immediately following his apprehension, he was tortured and detained in atrocious conditions. Rozahun, a 47-year-old Uyghur businessman who lives in Japan, sadly experienced the death of his younger brother in East Turkestan (or Xinjiang, which is the name preferred by the Chinese state and media) in December 2018. In addition, several of his other family members found themselves under the close surveillance of the state security services. Rozahun has fearlessly engaged with Japanese media, putting his own safety at risk by disclosing extensive video and audio recordings of conversations he had with his brother on the Chinese messaging application, WeChat. [5] [6]

Chaired by the expert barrister Sir Geoffrey Nice QC, the second stage of the Uyghur Tribunal continues to hear harrowing accounts of torture, abuse, intimidation, rape, and murder orchestrated by the Chinese state. Furthermore, the topics of detention, abortion, and psychological abuse at the hands of the Chinese Communist Party are also explored. Sir Geoffrey is a former part time judge and has a wealth of experience in the British and international legal systems. Most interestingly, from 1998 to 2006 he led the trial of former Serbian President Slobodan Milosevic, who is often known as the Butcher of the Balkans. He has subsequently worked hand-in-hand with the International Criminal Court. [7]

Accompanying Sir Geoffrey on the tribunal’s panel are Hamid Sabi and Nick Vetch. Sabi holds the position of Counsel to the Tribunal, and is well versed in international human rights law, arbitration, and litigation. Indeed, he formerly served as Counsel to the China Tribunal, in addition to playing a vital role in the parallel Iran Tribunal. The latter was in some respects similar to the Uyghur Tribunal, as it was also a people’s panel. During the Iran Tribunal, Sabi held the position of Counsel and Rapporteur, assisting in the investigation into mass killings of political prisoners by the Islamic Republic of Iran in the 1980s. [7]

From the disturbing evidence produced by Mehray Mezensof during the Tribunal’s proceedings was how her husband Mirzat was detained two days prior to the couple’s planned migration to Australia. He was initially interrogated due to his activities whilst in Turkey, and suffered from the notorious “tiger chair”. This chair is made of iron, and is employed by interrogators to restrain and torture detainees, in some cases causing excruciating blisters and cramps due to the person being completely immobile for days on end. [8] [9]

In one conversation with her husband, Mehray recounted the following:

“Although my husband denied being physically tortured in other ways he said that he heard the echoing screams of detainees being tortured during the night. He recalls one of his cellmate’s being taken during the night and then beaten until he was bloody and bruised and then dumped back into the cell the next morning. He said that his cellmate’s crime was also that he had travelled abroad.” [6]

Mirzat was born in the city of Urumqi and, prior to his detention, supported his father in the family-run kebab shop. However, Chinese authorities began to surveil him after he visited Turkey in 2014. He had gone on a travel visa, but enjoyed the experience so much that he pursued studies in the country. Thereafter, in 2015 he applied for a student visa and was granted permission to study the Turkish language for six months. Immediately following this period of education, he worked as a tour guide for almost half a year. Mirzat and Mehray met in 2016 and married later that year. Things were relatively calm until April 2017, when Mirzat’s Australian visa was approved. It was then that they began hearing rumours of Uyghurs being put into concentration camps, and therefore hastily booked tickets to Melbourne for 12 April 2017. Regrettably, police came and took Mirzat away on the 10th, just two days before their planned departure to Australia.

Mehray shared with the Tribunal how her husband was detained, released, and continually hounded by the Chinese authorities. He continued to live in fear for his life, obeying all orders that were issued to him by the police.

“The psychological torture didn’t stop even after my husband had been released as he was still being harassed by police officers. They told him he was on probation for 6 months and had to come into the police station every day to show himself to them and to sign a document.

“After the ordeal my husband had went through he made sure to comply with them and never missed a signature. When I arrived in Urumqi in July 2019 my husband had to ask permission from police officials if he could go to the airport. He was accompanied by a Hui police officer for the first few days that I was in Urumqi.” [6]

“After that my husband frequently received phone calls and video calls from police and he was also called into weekly meetings. My husband was constantly living on edge wondering if he would be taken away again. In order to show the police officers that he was a changed man my husband remained obedient and did whatever they asked of him.” [6]

The real tragedy that could be felt from Mehray’s account is that of repeated moments of hope, which were always abruptly taken away by the despotic Chinese state; whenever her husband was released, he would then be detained once more. This process continued until September 2020, when she unfortunately lost all contact with him. In April of this year, Mehray found out through contacts in Urumqi that Mirzat had been sentenced to 25 years in prison for suspected “separatist activities” during his time in Turkey.

In her concluding remarks to the panel, Mehray explained that police officers in Xinjiang have a “quota” for detaining Uyghurs:

“Although at first Uyghurs who travelled abroad and “religious” Uyghurs were being targeted, in order to meet their quota police officers started detaining Uyghurs without reason. After a short period of what seemed like freedom for the Uyghurs who were released it didn’t last long for some of them as people started being rounded up and detained again in early 2020.” [6]

In addition, during yesterday’s session, Dr Khalmat Rozahun provided an account of the ordeal his family has underwent. Rozahun is a technician who completed his bachelor’s degree in Nanjing, China, and thereafter completed a postgraduate degree at the Tokyo Institute of Technology. He explored the tough period that followed after his younger brother passed away from cancer.

“My younger brother died…we had a group call with my older brother and a younger sister where I was confirmed the death of my younger brother. We cried. During that time, I was concerned about the safety of my other siblings and my mother, and I tried to call them but was not successful, nor did they call me. But through their emotions, I felt as if they were being watched hence, I could not say much fearing they might be harassed.” [5]

When Dr Rozahun found another chance to speak with his family, he managed to talk to his mother, sister, and two older brothers. With their mother in poor health, he sent a message to any potential Chinese security service members eavesdropping on the call:

“My mother was ill. Before I expressed to them (could be referencing to the Chinese officials) ‘I would be taking blood revenge from your idiots if anything happens to my mother’, hence my mother was untouched. I saw my mother, my sisters, and brother. We all cried a bit and talked a bit.” [5]

The highly educated tech graduate explained to the Tribunal that another brother of his kept sending messages to his wife, asking to speak with him privately by stating: “I want to talk to my brother Khalmat if possible.” Khalmat assumed that it was in the aim of stopping him from speaking out or partaking in public rallies for the Uyghurs, and therefore avoided returning these messages for some time.

However, on one occasion his wife informed Khalmat that his brother was dressed in a black face mask, with a look of desperation in his body language. This spurred Khalmat to finally speak with his brother, and he wisely began to record all of the subsequent conversations on his mobile phone. These were later shared with the Japanese media, sparking national outrage over the Chinese mistreatment and oppression of the Uyghurs.

Dr Rozahun shared with the Tribunal how his brother exhibited visible signs of torture. Despite this, Dr Rozahun’s brother urged him to give his allegiance to Chinese leader Xi Jinping.

“When he lifted his face mask, I noticed his neck was swollen (you can clearly see in the recording), then I desperately intended to have that conversation recorded from a close angle. In about 8-10 minutes of our first call, my brother said ‘don’t go to protest, the policy of Xi Jinping is good, China’s policy is good’ (you heard what he said). What can one say other than ‘yes’.” [5]

China has desperately tried to dismiss the Uyghur Tribunal, with a report on the 20th anniversary of 9/11 making the outrageous claim that the “staging farce shows no respect to true terror victims”. [10]

In an article published in the notoriously pro-CCP paper The Global Times, reporter Liu Xin shared a pitiable statement made by Xu Guixiang, who is reportedly a spokesman for the Xinjiang regional government. In it, Xu foolishly claimed the following:

“The so-called tribunal was set under the conclusion of anti-China forces from the US and the West with the ‘World Uyghur Congress’ [WUC] and other ‘East Turkistan’ terrorist groups; it has no legal right to hold ‘hearings’ nor charge a country for one of the most severe genocide crimes. It gets money mainly from the WUC and presets guilty conclusions, using the lies of a bunch of anti-China ‘scholars’ and ‘actresses and actors’ to fool the public.” [10]

However, the incredible statements from yesterday’s session at the Uyghur Tribunal are a clear reason why the international community must continue to apply the utmost pressure on the Chinese Communist Party (CCP). As a follow-up to the second batch of evidence gathering sessions, further testimony will be heard on Saturday, with a judgment expected to be handed down by the panel and its jurors by the end of the year.