Yemen: At least 20 killed in Saudi-led Coalition Airstrikes on Wedding 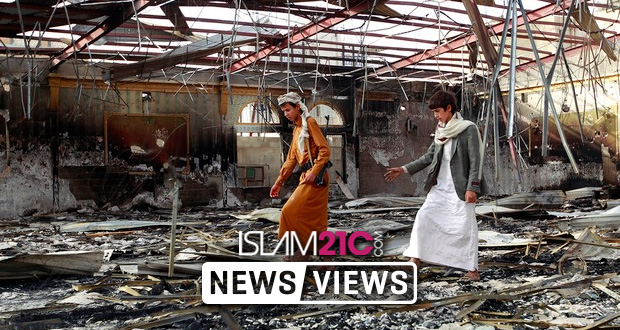 At least 20 wedding attendees were killed in Saudi-led airstrikes on Hajjah, Northwest Yemen, on Sunday night. According to witnesses, the wedding party was targeted in separate strikes, several minutes apart,[1] resulting in dozens of deaths and injuries. Sources report that the majority of victims were woman and children, and that the bride was amongst those killed.[2]

The Health ministry spokesman said that there were delays in treating the wounded as ambulances could not reach the site out of fear of further strikes, as jets continued to fly overhead. The head of the local hospital, Al Jumhouri, told Reuters that his hospital eventually received over 40 bodies torn to pieces and that amongst the 46 injured seen so far, 30 were children.[3] Unverified footage showed a young boy desperately clinging on to his father’s dead body and refusing to let go as medics ran to assist.[4]

Saudi coalition spokesman, Colonel Turki al Makki, said they would be investigating the reports and not making further comments at this stage.[5]

A separate attack in Taiba killed a family of four on the same night,[6] while a bus was targeted by airstrikes on Saturday, killing 20 commuters.[7] According to the Yemen Data Project, one in three of the 16,847 coalition airstrikes since 2015 have hit non-military targets, including hospitals, schools and shops.[8] Indeed, it is not the first time that weddings have been bombed in air raids; 174 wedding attendees died within 2 months in 2015, although the coalition denied involvement at the time.[9]

The civilian deaths are the latest in the ongoing civil war in Yemen in which over 10,000 have been killed since it began 3 years ago. According to a recent UN report, the Saudi-led coalition is said to be responsible for 61% of all civilian deaths, whilst indiscriminate shelling by Houthi rebels accounts for the rest.[10] There have been recent attempts by Houthi rebels to target Saudi Arabia, although their missiles have all been successfully intercepted.[11]

In a separate set of incidents, Al Jazeera reported that several Muslim scholars have been assassinated in Southern Yemen recently, particularly within the last 6 months. The report suggests that many of the clerics were linked to the Islāh Party, the Yemeni branch of the Muslim Brotherhood. Elisabeth Kendall, a research fellow at Oxford University, said:

“It is not clear who is doing the targeting, although there are widely-held beliefs on the ground that think it is being done by the UAE-backed forces”.[12]

Over 22 million face starvation as a result of the ongoing conflict, prolonged and exacerbated by the involvement of regional powers seeking their own interests at the expense of the civilian population.[13]

Ethar Relief is one of the main UK charities providing life-saving support to the millions affected by the deadly Cholera Outbreak in Yemen. You can help save lives, click here to find out more.