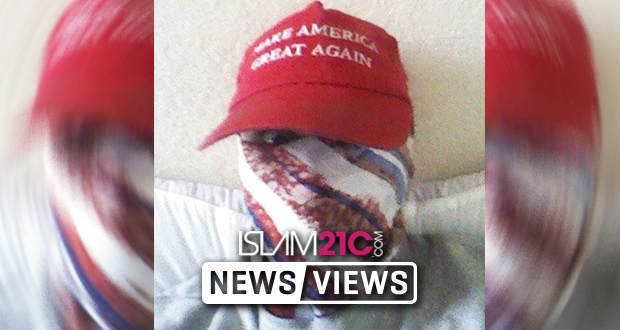 Terror was unleashed on a high school in Florida on Wednesday as yet another American shooter opened fire on his former school.

Just before the end of the school day, Nikolas Cruz, a 19-year-old white male, approached Marjory Stoneman Douglass High School in Parkland, Florida—the school he previously attended and was expelled from—and set off the fire alarm before allegedly opening fire with a military-grade rifle.

Officials said that he fired shots outside, and then followed students running back into the building to take shelter. He then roamed the halls of his former school allegedly targeting those huddled in classrooms, after which he blended into the crowd of students in order to escape undetected during the evacuation. He was later arrested in the neighbouring Coral Springs, it was reported.[1]

Social media sites trended with news of the shooting with many students uploading photos and videos during the time of the shooting. 17 children and adults are said to have died during the attack, including an assistant coach and security guard Aaron Feis, who reportedly stepped in front of students to protect them from being shot. He was rushed into surgery but later died in hospital.[2]

Assistant football coach Aaron Feis was killed in the Florida school shooting, according to the school's football program

He threw himself in front of children who were being shot at by the suspect, acting as a human shield, a communications director said https://t.co/ghQPhWcyCQ pic.twitter.com/EC7TjH9HHv

The suspected shooter was known for a history of disturbing behaviour and views, with an Instagram account of his name (which has now been taken down) glorifying guns, with a profile picture of a Donald Trump campaign hat featuring “Make America Great Again”.[3] He is also reportedly thought to have been trained by the US Army, as a member of its Junior Reserve Officers’ Training Corps programme.[4]

His former classmates told CNN affiliates that they were “not surprised” when his identity was revealed as the suspected shooter.

“We actually, a lot of kids threw jokes around Iike that, saying that he’s the one to shoot up the school, but it turns out everyone predicted it. It’s crazy.”

It has also emerged that a YouTube account with the same name was reported to the FBI months ago after it commented under a video about a previous shooting, “I am going to do what he did”, before threatening to kill members of Antifa, an autonomous collection of anti-fascism groups in the US.[5]

The shooting—as usual—has provoked the historic gun debate within America.

Our hearts go out to victims and families of #FloridaShooting It's as simple as this #America #guncontrol or more dead kids pic.twitter.com/HmFelabQNA

“Don’t tell me tomorrow isn’t the appropriate time to debate gun violence. If you’re a political leader doing nothing about this slaughter, you’re an accomplice.”[6]

Donald Trump was accused of “blaming” those who knew the suspected shooter for tweeting about the incident:

“So many signs that the Florida shooter was mentally disturbed, even expelled from school for bad and erratic behavior. Neighbors and classmates knew he was a big problem. Must always report such instances to authorities, again and again!”[7]

It is routine for the mental health of white perpetrators of such crimes to be the leading narrative when it comes to causality (and the incidental beliefs of foreign-looking perpetrators),[8] rather than the ubiquity of military-grade assault weapons in the country.

Despite his connecting mental health with mass shootings, weeks into his presidency Trump repealed a law designed to make it harder for people with mental illnesses to buy firearms.[9]

Yesterday’s shooting was reportedly the 18th school shooting in the US in 2018 alone, according to a gun research group.[10]

There have been 18 school shootings in the U.S. in 2018, per @everytown. It's February 15th. Subtract days school wasn't in session (weekends, holidays). That's EIGHTEEN SHOOTINGS IN 31 SCHOOL DAYS.

Thoughts and prayers, absolutely. But that's not near enough. #FloridaShooting pic.twitter.com/5uCNgxGA6U

Gun-related deaths are on the increase in the US after a period of stasis, according to the Centers for Disease Control and Prevention, with more than 38,000 gun-related deaths in 2016.[11]

Many have pointed out the disproportionateness of the fear and xenophobia concerning “immigration” and “terrorism” that characterises much of US politics, fuelling policies like Donald Trump’s “Muslim Ban”,[12] since the chances of an American being killed by a foreign-born refugee is 1 in 3.64 billion per year, whilst being killed by an undocumented immigrant is 1 in 10.9 billion per year.[13]

Despite this, the rhetoric and vitriol surrounding immigration and Muslim “terrorism” often dominates political discourse, whilst conversations about gun control are often avoided by influential pundits and politicians. Donald Trump’s presidential campaign reportedly received tens of millions of dollars of support from the National Rifle Association (NRA), including millions going into adverts attacking Clinton’s campaign, and the NRA has reportedly given millions more to many other influential US politicians.[14]

This routinely prompts complaints of the power of corporate lobbies funding politicians and mainstream media corporations, in a system which author Chris Hedges describes as “inverted totalitarianism”,[15] a phrase coined by political philosopher Sheldon Wolin.

Mainstream media outlets’ reaction to the latest shooting has been typically irresponsible. Psychologists have long warned that such coverage of mass shootings are a causative factor in the rise of such shootings in the US.[16] As forensic psychiatrist Dr Park Dietz scolded BBC Newsnight years ago:

“Every time we have intense saturation coverage of a mass murder, we expect to see one or two more within a week.”

Doing its part, Rupert Murdoch’s tabloid led with a repulsive headline lionising the suspect as the “Valentines Day Killer”.

LEAD STORY: We've given the #FloridaShooting culprit a cool nickname and printed a moody picture of him with his weapon, because that definitely isn't inspiring to potential maladjusted copycats.

Fake news has also been spread around concerning the perpetrator, with some Alt-Right commentators typically trying to paint him as left-wing or Antifa, as well as people using social media to identify the shooter as someone else.[17]

The spreading of unverified coverage as fact years ago led to an Asian student incorrectly being identified as one of the Boston Marathon bombers, after which he disappeared and was later found dead.[18]

Whatever the detailed motives of this particular case, it is clear that the US—like many western countries—suffers from vices that are far from being under the scrutiny of mainstream political discourse, which is instead dominated by scapegoats and distractions such as immigration or “terrorism”.

This does not only make life difficult for those directly scapegoated by the system, but it is a betrayal of the trust of the wider population, whose attention—and therefore real interests—is deliberately subverted. As a teacher, who hid with 19 children for over 40 minutes during yesterday’s shooting, told CNN:

“[The school] could not have been more prepared for this situation. We have trained the kids for what to do … We did everything that we were supposed to do. I feel today like our government, our country, has failed us and failed our kids and didn’t keep us safe.”[19]