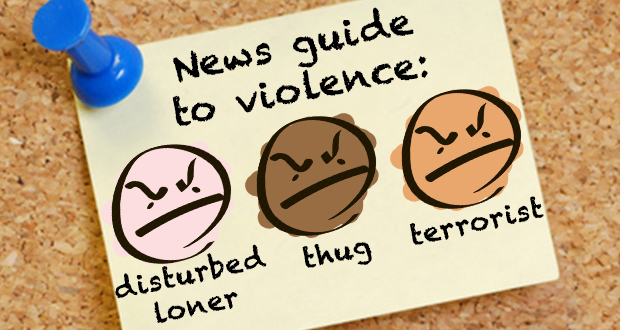 According to Shooting Tracker, which describes itself as the word’s only crowdsourced mass shooting tracker, there have been 207 mass shootings in the United States this year till date[1]. Apart from raising the obvious and controversial debate that has been lingering in back of America’s consciousness, there is more to the issue than laws governing gun control.

The rather large caveat in the debate is the bigotry within it. The US media has been pushing forward the notion that “Islamic terrorism” has now reached their streets with the increasing incidences of mass shootings. In truth, this is simply not the case. Yet there have been talks in the US of Muslim free zones where Muslims are being banned by owners of gun shops[2], in an attempt to prevent and combat the threat of “Islamic Extremism”. But how many out of the 207 mass shootings were actually carried out by a perpetrator with Islamic ideology as their motivation? None, however one of the perpetrators happened to, loosely speaking, belong to the Muslim faith.

What this figure highlights is not just the Islamophobic narrative behind the way stories are reported in the United States or Europe for that matter, but it also brings to light their cultural thought process. Deep rooted in this debate is the concept of white privilege, where the white perpetrator is given yet another privilege, that of individualism.

How many times have you witnessed a debate where the entire white community has been labelled, and treated prejudicially when a mass shooting occurs at the hands of a white perpetrator? Ask yourself that question, especially if you are white and know that the answer lies in the inequality of White privilege. You alone are an individual, and your actions reflect only yourself. This unfortunately is not the case for most of us, especially Muslims.

In all except one, the religion of the perpetrator was not mentioned. Why was religion in one out of 207 mass shootings important? Because the shooter was of a Muslim background, did the shooter state whether his religion was the motivation for his attack? No, was it important? No, the media feasted upon their chance to spread their bigoted interpretation of the incident. In fact, the perpetrator in the incident was reportedly said to be suffering from mental illnesses. But even suffering from mental illness does not afford you the sympathetic treatment offered by the media to those that are white. If you are Muslim or related to a Muslim, your mental instability or motivation is irrelevant.

The name of the perpetrator was Mohammad Youssef Abdulazeez in his attack in Chattanooga where five US soldiers died, the immediate motive identified was “radical Islam”. His religion rather than holding little or no value like in the other 206 mass shootings was the only relevant part of his life that mattered. In fact he was described as a ‘devout Muslim’ without any real insight into his life, which is indicative of a pre-set motive behind comments made by the US media outlets. It emerged however that Abdulazeez had a history of mental illness and abused both drugs and alcohol[3]. His mental state was not fundamental, as it would strip him of the collectivism imposed on the Muslim community and instead offer him the privileged status of an individual.

The problem is not isolated to the US, there is a similar narrative in the UK and the rest of Europe. Compare the public awareness—and even the ‘terrorist’ label designation—to the black and Muslim Michael Adebolajo, with far more dangerous white criminals—given much lighter sentences—like Ryan McGee [4] and Robert Cottage [5]. It is clear the message the mainstream media is sending out to the public, both at home and abroad. If you are white, and you are not a Muslim your crime is just another incident of criminality. But if you are not white, and Muslim then your crime by default is automatically aggravated. It makes Muslims and/or non-white people feel uneasy, like they are constantly on edge, this makes them feel more alienated, peddling disenfranchisement within the community.

The issue is not if we are equal—it is evident from the portrayal of one out of the 207 mass shootings that there is no equality. The issue is, what are we, white, non-white, Muslim and non-Muslim alike, going to do about the abhorrent lack of individualism and inequality present within the media. Do we challenge it or do we just sit back and let dehumanisation of certain groups of our society occur, despite knowing the consequences go unquestioned?

Ali R Ilyas is a 23 year old Trainee Solicitor at Lloyds Solicitors in Longsight, Manchester. His interest in human rights activism, specifically in women’s rights, led him to become a Director of the emerging Luna Women’s Foundation, which has a specific aim to target gender inequality. Apart from being involved in several community organisations and his political role as the Chair of his local Labour Party, Ali enjoys writing creative stories, articles, poetry and performing spoken word poetry.