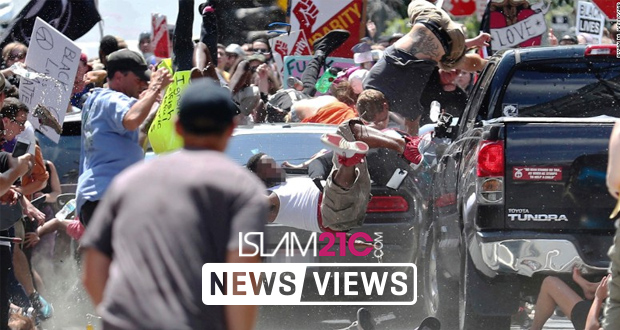 US President Donald Trump has faced criticism after his response to violence at a white supremacist rally in Charlottesville, Virginia, after a car drove into a crowd of anti-white supremacy protesters, throwing people into the air, killing one and injuring 19.

Instead of condemning the far-right in particular, Trump condemned violence by “many sides”, prompting criticism from all quarters, including fellow Republicans. Many have also highlighted that it was yet another example of the extremely common incidents of “domestic terrorism” carried out by a white male.

Mr. President – we must call evil by its name. These were white supremacists and this was domestic terrorism. https://t.co/PaPNiPPAoW

Very important for the nation to hear @potus describe events in #Charlottesville for what they are, a terror attack by #whitesupremacists

Democrat Nancy Pelosi said, “the president’s talk of violence ‘on many sides’ ignores the shameful reality of white supremacism in our country today”.

The White House clarified the statement after the criticisms,

“The president said very strongly in his statement yesterday that he condemns all forms of violence, bigotry and hatred. Of course that includes white supremacists, KKK, neo-Nazi and all extremist groups.”[1]

The alleged driver of the car that ploughed into protesters, 22-year-old James Fields from Ohio, has been detained on suspicion of second-degree murder. The ‘mainstream’ political and media reactions have been characteristically mute compared to similar attacks committed by non-white suspects, prompting similar criticism from the general public to the relative “silence” over the mosque bombing days earlier.[2]

The governor of Virginia, Terry McAuliffe said that his only message for the white supremacists who had to come that town was: “Go home.”[3]

The civil rights organisation Southern Poverty Law Center (SPLC), has said that “Trump’s run for office electrified the radical right, which saw in him a champion of the idea that America is fundamentally a white man’s country.”[4]