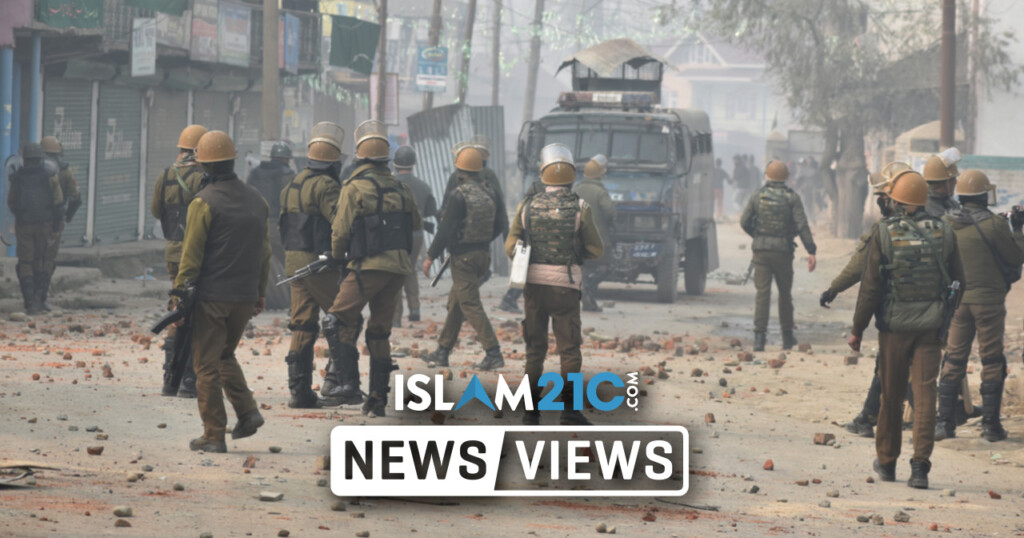 Indian police have filed charges against an army officer as well as two civilians for planting guns on the corpses of three Kashmiri labourers shot and killed in July earlier this year. The three labourers were killed as a result of what the Indian Army originally said was a gun battle that began when the men allegedly fired at security forces in the village of Amshipora, Shopian District.[1]

In an attempt to back up the deceitful version of events from the July incident, Captain Bhoopendra Singh of the Indian Army, along with two civilian accomplices, reportedly placed weapons on the bodies of the three dead Kashmiris to make it appear like they were armed fighters.

Singh and his alleged accomplices have been arrested, with Singh in military custody and the other two in a police detention facility.

Singh, part of the Indian Army’s 62 Rashtriya Rifles (RR) branch, has been charged with a raft of offences, including murder.[2] A statement from the police said:

“During the investigation, it transpired that conspiracy has been hatched by accused Captain Bhoopendra Singh alias Major Basheer Khan of 62 RR, Tabish Nazir, son of Nazir Ahmed Malik of Chowgam, and Bilal Ahmed Lone, son of Ghulam Nabi Lone of Arabal Nikas Pulwama to abduct and stage the encounter.

They deliberately and purposefully chose not to follow standard operating procedures (SOPs). They planted illegally acquired weapons and material on their dead bodies after stripping them of their identities and tagged them as hardcore terrorists in possession of war-like stores and deliberately providing false information to colleagues/senior…” [2]

The deceased labourers included two brothers – Abrar Ahmad Khan, 17, and Javaid Ahmad, 25 – as well as Imtiyaz Ahmad, 20. The labourers, all of whom were residents of Rajouri District, vanished after leaving for work in Shopian District on 16th July.

Ahmad, who is one of the relatives of the deceased Kashmiri labourers, said that he and his family have “lost peace and sleep in search of justice… One of them was my brother and the other two were cousins. We don’t know whether we will get justice or not… We don’t know the whole story yet, we must be told every truth behind the barbaric act in which we lost three young family members…”[3]

At the time, the now infamous ‘Amshipora Murders’ led to protests. The news that police in Kashmir (who operate under direction from New Delhi) have pressed charges against an army officer is bound to offer some relief in a region that has been under harsh restrictions for many decades.

The case has once again brought attention to the Armed Forces (Special Powers) Act (AFSPA) of 1958, whereby Indian soldiers stationed in Kashmir cannot be tried in a civilian court unless the New Delhi government approves.

There is reportedly a culture of rewarding killings as army officers are allegedly given monetary rewards, thus incentivising murder.[4]

The dilemma that the AFSPA poses is that it is much more difficult to seek justice through a military court martial. According to an Al Jazeera article, no permission has ever been granted to try a member of the army in a civilian courtroom over the past 30 years.