India’s Justice System Condemned After Yet Another Child Rape 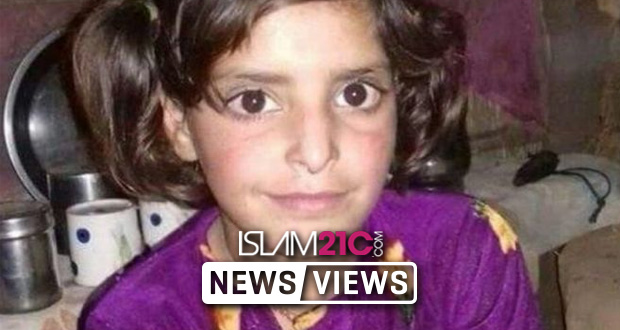 Asifa, an eight-year-old child filled with innocence and the joy of life, was drugged, gang-raped and brutally murdered in a Hindu Temple in Indian-occupied Kashmir. Many had not heard of Asifa Bano until this week, or the depraved ordeal she was subjected to in the last moments of her short life by a gang of Hindu men.[1]

Asifa’s family belong to nomadic Muslim shepherds (called Gujjars) who crisscross the Himalayas with their cattle and on the 10th January whilst tending horses in a meadow, Asifa went missing in the forest. The family and local villagers initiated an immediate search and rescue operation penetrating deep into the forest and throughout the night but Asifa was not found.[2]

Her family went to the local police station, but, according to her father, Muhammad Yusuf Pujwala, rather than assist the tormented parents, one police officer suggested the eight-year-old may have “eloped”. [1]

Distraught fellow Gujjars, having been offered no assistance from the local police, staged protests and blocked a highway. The Police relented but assigned just two officers to the search. It was latterly revealed that one of the two officers, (Deepak Khajuria) was himself eventually arrested in connection to the gruesome crime. The Police’s conduct in this matter has come under heavy criticism as they delayed alerting the press to Asifa’s disappearance for several days.[2]

Five days later, on the morning of January 17, Asifa’s small, lifeless body was found, laying in the forest bushes, only a few hundred metres away from her family. Asifa’s mother, Naseema said:

“She had been tortured. Her legs were broken. Her nails had turned black and there were blue and red marks on her arm and fingers.” [1]

An investigation into Asifa’s murder has found that she had been imprisoned in a local Hindu Temple for several days, administered sedatives to keep her unconscious and then “raped for days, tortured and then finally murdered” by strangulation and being struck on the head twice with a stone. According to the investigation, Asifa would have been murdered earlier had one man not insisted on waiting so he could rape her one final time.[2]

A 60-year-old retired government officer and custodian of the Hindu Temple in question, Sanji Ram is alleged to have planned the gruesome crime with the assistance of four Hindu police officers; Surender Verma, Anand Dutta, Tilak Raj and Khajuria.[3] Investigators have even alleged these police officers washed Asifa’s bloodied and muddied clothes before sending them for forensic examination,[1] in an obvious attempt to remove any forensic evidence.

Whilst this depraved crime did not initially receive much media attention in Hindu majority Jammu, in the state assembly an influential Gujjar leader Mian Altaf demanded an inquiry. However, Rajiv Jasrotia, a lawmaker in India’s ruling right-wing Hindu nationalist BJP party, said the incident was only a “family matter”.[1]

In the months since, rather than nationwide revulsion at this sadistic child gang-rape and murder, Hindu nationalists have turned it into a rallying cry and have been demonstrating against the arrest of the eight Hindu men accused of the heinous crime. During such rallies slogans such as “Jai Shri Ram” and “Bharat Mata Ki Ja” have been shouted.[3] Two members of Modi’s BJP party also attended a rally in support of the accused whilst a mob of Hindu lawyers physically blocked police from entering the court to file charges against the accused Hindu men.[4]

Asifa’s father, Mr Pujwala, has tried to make sense of this senseless crime, stating he believed the Hindu criminals’ objective was to drive the Muslim Bakarwal tribe people away.[2] Kashmir has been a restive state since 1947 when India was partitioned and there has been an armed revolt against Indian rule since 1989[5]. The original borders, which is the cause of so much strife, was drawn up by Viscount Radcliffe with the passing of the Indian Independence Act.[6] In a visit to Pakistan in 2011, then Prime Minister David Cameron, when invited to solve the problem of Kashmir, declined and apologised for causing the religious tensions in the first instance.[7]

Rather than sit down and only lament over this unspeakable crime, supporters of Asifa began a campaign called #JusticeForAsifa. Although this depraved crime occurred in January, the pressure exerted by this campaign is bearing fruit with Bollywood celebrities such as Abishek Bachan and Javed Akthar[8] and prominent Indians speaking out including tennis star Sania Mirza.[9] Just yesterday, notable politician and Indian royalty Rahul Gandi tweeted:

“India simply cannot continue to treat its women the way it does. What happened to Asifa at Kathua is a crime against humanity. It cannot go unpunished”. [10]

India is known to have a notorious problem with rape and in Modi’s India it seems Muslim girls and women are in even greater danger with little hope of justice. Campaigns such as #JusticeForAsifa are critical to ensure such crimes are not repeated. With the world’s attention on India, the courts today took action in another child rape case, ordering the arrest of BJP politician Kuldeep Singh Sengar and his brother for similarly heinous crimes.[11]

Upon reading of such disturbing news, we and indeed the parents of Asifa, can find solace from the following hadīth.

Abu Hassan recalled: ‘I said to Abu Hurayrah: Two of my sons have died. Can you narrate to me any hadith from the Messenger of Allah (sall Allāhu ʿalayhi wa sallam) which will console us for our loss? Abu Hurayrah said: “Yes”: ‘Their little ones are the little ones (da’aamees) of Paradise. When one of them meets his father, or his parents, he takes hold of his garment, or his hand, as I am taking told of the hem of your garment, and he does not let go until Allah admits him and his father to Paradise. [12]

We ask Allāh (subhānahu wa ta’ālā) to have mercy on Asifa and her family, to grant them patience and admit them to the highest stations of paradise. We ask Allāh (subhānahu wa ta’ālā) to shower mercy on the families of our murdered children whether that is from the chemical attacks or barrel bombs in Syria, or the bombarded, starved children of Yemen, and all of those suffering elsewhere. Allāh, you are our only helper.