World in Frenzy Over ~13,000th US Airstrike in Syria 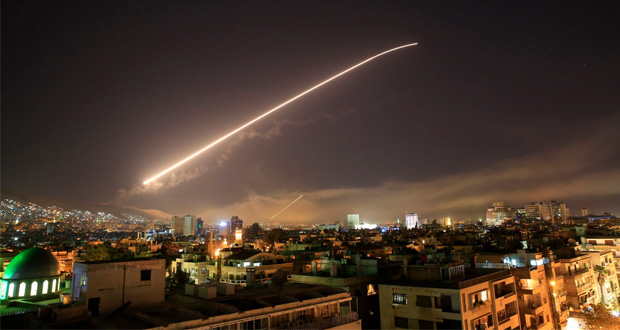 Many of us woke up to the news of US, UK and French airstrikes against the Syrian Regime “on targets associated with chemical weapons capabilities.”[1] The strikes, we were made to believe, came after world powers promised a response to the Syrian Regime’s devastating chemical attack in Douma, the last rebel-held area in Eastern Ghouta in which at least 70, the majority of whom women and children, were suffocated to death. Hundreds are still in critical condition and more civilian devastation is anticipated as pro-government militias, backed by the Russian air force storm the besieged town.[2]

The Syrian Regime’s use of chemical weapons against civilian havens has all but become the norm. Phosphorous, Sarine Gas, Napalm, Chlorine Gas, Mustard Gas and other unknown substances have been used on civilian centres in Douma, Ghouta, Atabah, Hama, Aleppo and their surrounding areas in order to pressure rebels forces into surrender. According to the US itself, Syria has used chemical weapons “at least 50 times during the war” whilst public estimates coming out from Syria put that figure as high as 200.[3] Is the world’s moral conscience finally waking up?

What the US is lauding as its appropriate and fitting humanitarian response has sent the world into a frenzy. Popular media has plastered its front pages with images of the US, UK and French sponsored response, “right and legal” according to Theresa May.[4]

It took little to persuade many of us that this reprisal was of a humanitarian nature; one stemming from a newfound feeling of moral obligation and an overdue, fitting slap to the brutal Syrian Regime for having ‘crossed the line’ one too many times.

President Trump just a few days ago derided his external intelligence agency for delaying a drone strike that would have resulted in the certain killing of innocent civilians complaining,  “Why did you wait?”[5] How can a question that clearly echoes his government’s reputation for savagery and devastation be harmonised with a sudden new growth of moral obligation?

“Today, the nations of Britain, France and the United States of America have marshalled their righteous power against barbarism and brutality.”[6]

An emotional address that promulgates a valorous and poetically heroic US policy in Syria, driven by the yearn to fight for the oppressed against a vile and despicable regime. One that, according to US Ambassador to the UN Nick Haley, should “unite us in shock and anger” in her theatrical address to the UN.

A dramatic scene and a heated exchange of words, the ‘lights’, ‘cameras’ and promised ‘action’, preluded with suspenseful rhetoric, characteristic of that all-too-notorious, mentally deranged Tweetoholic of a US President, whose cringeworthy remarks have all but become customary,

“Get ready Russia, because they will be coming, nice and new and “smart!” You shouldn’t be partners with a Gas Killing Animal who kills his people and enjoys it!”[7]

A picturesque scene of the world’s saviour state coming to aid of the Syrians, delineated as the US’ first involvement to a world asleep in caves during all of the US’ more than 11,300 lethal, destructive, terrorising bombs dropped on Syria since 2011 (as of Mid 2017).[8]

The operation named ‘Inherent Resolve’ that allegedly targets ISIS has in some months killed more civilians than ISIS or Russian belligerents.[9] Let alone Iraq, let alone Fallujah, decimated and civilly eradicated by the ‘righteous’ marshalled power, scoring some 40,000 civilian deaths.[10] Astronomical numbers sold as ‘collateral damage’ on the US and its allies’ moral stock exchange, or regrettable victims of an ISIS stranglehold on those areas; simply ‘human shields’, oh well.

‘Inherent Resolve’ did indeed resolve on blitzing both the rebel factions; some supported by Turkey and others rivals of both ISIS and the chemical Syrian Regime. Simple, forged, dubious associations between these groups and the ‘al-Qaeda affiliated al-Nusra front’ is all that it took.[11] Even if al-Qaeda is disavowed, rebels fighting for their people’s liberation from the butchery of both Assad and ISIS are still legitimate targets for reasons only known to the US.

The US has ravaged most of a Syrian rebellion for their association to a group that has disavowed itself from al-Qaeda – why? As a matter of fact, the US has shared the Syrian airspace with both the regime and the Russians, through intricate military coordination, maybe passing a few chemical weapon-laden aircraft, flying side-by-side US fighter jets unabated. Where was the US moral conscience then?

What kind of harmonious Russian-US airspace coordination, seeing jets pluming “within miles of one another”,[12] agreed in as early as 2015 can occur between sworn adversaries? What kind of ‘adversaries’ can both agree on sparing the regime whilst counter-intuitively destroying the opponents of the groups they are destroying? It is not complicated. It is an agreement, it is a deal, that neither Russia nor the US wants to see the back of the Syrian Regime. Good morning to those who just woke up to the fact that the Syrians have none save God Almighty.

If there was doubt, now it is clear. The Syrian Regime’s unsparing use of chemical weapons is not because of them being emboldened by Russia’s rusty, lonely aircraft carrier with hardly functioning toilets;[13] but because of implicit western agreements needing to undermine the revolution.

It is the Islamic sentiment grasped by the Syrian people and rebel groups that cannot be tolerated by the hysterically Islamophobic US policymakers. No rebel group is “moderate” (read: compliant) enough for them, hence why they can never be allowed that thing called ‘democracy’ superficially flaunted in the Middle-East’s face. There is none of it. The US’ support (which no one is after) has thus only extended to the YPG; a faction of a group the US itself lists as a proscribed terrorist organisation,[20] that happens to have discernible alliances with the Syrian Regime which it avidly avoids confrontation with it.[14]

So why did the US, UK and France finally meet their words with ‘action’? Some will argue that it is to prevent the proliferation of chemical weapons and to enforce ‘International Law’. Were it not for images of lacerated limbs, sliced throats and buried children staring us in our flooded eyes, such a claim would have us crying with laughter. Tell the lacerated limbs of the ‘dozens of civilians’, shredded under a 500lb US bomb on the Omar ibn al-Khatab Masjid in the village of al-Jinah on the 16th of March last year,[15] that it is ok, because you were not the victims of a proliferated chemical weapon but an internationally legal one.

It was ‘legal’ according to the most repugnant, obnoxious, shameless government in the world; ‘the marshalled righteous power against Barbarism’.[16] Tell the parched limbs of the Gazans, scorched by Zionist-launched, US-developed and supplied illegal, chemical white phosphorous,[17] that it is ok, because ‘Israel’ is the US’ best friend.

Many were persuaded that the US administration was run by a deranged psychopath. But why should we be so harsh and critical? He is a man of his word. When that regime overstepped his red line, boy did those Tomahawks fly. Around 100 of them, assisted by a drumroll of four roaring British Tornados, Twitter-induced suspense and Russian and Syrian counter-threats to rock the theatre.

A devastating 103 cruise missiles were launched, designed to dislodge the regime’s ‘chemical weapons facilities.’ An empty ‘research centre’ was struck, possibly not even operational;[18] possible an empty building, or maybe one containing books on how to proliferate chemical weapons, mice being drip-fed Sarine or door handles laced with Napalm… An unamusing comedy.

What a cliff-hanger of a show, some 73 missiles were intercepted and not a single casualty was recorded. Who needs deranged, psychopathic ‘righteous marshals’ when you have Mr. Trump. Citizens of Douma, people of Syria, martyrs of the revolution, may Allah the Almighty be with you. Because so far as these psychopathic, smirking, gratified war criminals are concerned, their mission has been “perfectly executed”, your demands are ‘Mission Accomplished.’[19]