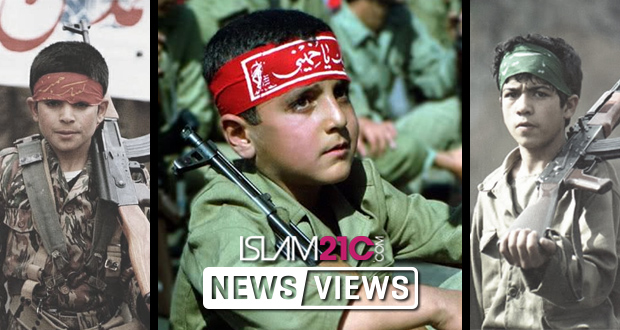 Human Rights Watch have reported that Iran’s “Islamic Revolutionary Guards Corps” (IRGC), has been recruiting and sending child refugees from Afghanistan living in Iran to fight in Syria in support of Bashar al-Assad.

Children as young as the age of 14 years have engaged in fighting in support of the Syrian regime. An example of this is in the division of Fatemiyoun, which is an entire Afghan Shia militia backed by Iran. The group fights according to Iranian officer commands and is equipped, trained and funded by the IRGC. [1] The group also has a staggering 12 – 14,000 fighters, according to a previous deputy commander. [2] Under International Criminal Law, enlisting or conscripting children under the age of 15 to partake in conflict is a war crime. [3]

The report arises at a time when the Syrian regime with the aerial support of Russian warplanes is bombarding Idlib. Human Rights Watch researchers stated that 8 children had been recruited to fight in Syria. The organisation presented pictures of tombstones of Afghan children who had been killed fighting in Syria. The tombstones were found in Iranian cemeteries where they had been buried by the Iranian authorities.

Iran has reportedly been enlisting and training thousands of Afghan refugees and immigrants since 2013. The Iranian regime has been advocating and encouraging Afghans to fight under the pretext of “protecting Shia sites” and in return offering to provide financial incentives as well as legal residence. [4] By doing so, the Iranian authorities are encouraging poor Afghans to join pro-Syrian militias by exploiting them in promising them a better life in return.

The emergencies director at the Human Rights Watch, Peter Bouckaert stated that:

“Iran has not just offered Afghan refugees and migrants incentives to fight in Syria, but several said they were threatened with deportation back to Afghanistan unless they did.” [5]

Iran claims that the Afghan refugees and migrants have volunteered to fight in Syria. However, some argue that their weak legal status in Iran and the constant fear of being deported to their poverty stricken, war-torn country puts a question mark on their decision to participate in the Syrian conflict.