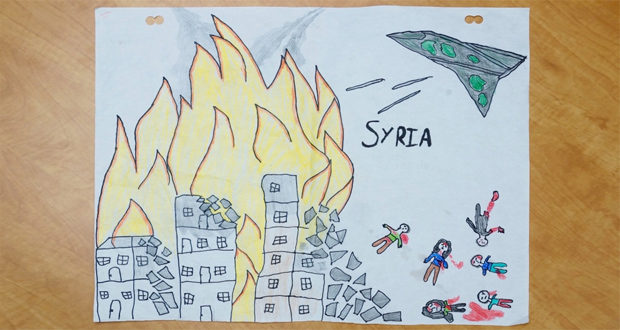 Turn the page. Change the channel. Click on another article. The news is too harrowing. Too graphic. Too disturbing. The war has gone on too long and we have seen too many dismembered babies for it to shock anyone, any more. We are a battered, bruised and humiliated nation that has lost hope.

No sooner had the aid appeals for the Burmese pogrom been made, that the escalation in bombings on Idlib (Syria) reignited. Thousands of bombs rained down on towns already decimated by war. Russian ordnance shifting rubble from one pile to another whilst snuffing out the lives of defenceless men, women and children. Scattered limbs and blood stained walls. Hospitals targeted.[1] Doctors murdered.[2]

So tell me lies, sweet little lies. Lift my mood, give me some juicy gossip about you know who, who apparently did you know what… but no names. Or tell me about the finer points on the different schools of thoughts on trivial, peripheral matters of Islām. Or better yet, let us start pointing the fingers, blaming anyone and everyone we can, as long as it is not ourselves.

Undeniably, this is a low point in Islamic history. But we have been here before. It was in this sacred month that Allāh saved Mūsā (ʿalayhi al-Salām) and the tribe of Israel from Pharoah. Imagine being there, trapped between the seemingly endless ocean before you with the most menacing, brutal, overwhelming army chasing you down. Imagine the horses galloping towards you as the venomous shouts of the cavalry get closer and closer. Your heart thudding against your chest, your mouth turning dry, lost for words, fearing the worst, frozen, you stare into the abyss. Suddenly a miracle; the sea parts.

“Or do you think that you will enter the Garden of bliss without such trials as came to those who passed away before you? They encountered suffering and adversity, and were so shaken in spirit that even the Messenger and those of faith who were with him cried: “When will the help of Allāh come?” Ah! Verily, the help of Allāh is always near!”[3]

The reader will notice that the situation was so awful that even the messenger, the one who receives revelation from above the seven heavens, cried: “When will the help of Allāh come?”

We do not even need to look so far back as Ancient Egypt. Let us consider instead the sacking of Baghdad, during which it is said the river Tigris turned red from the blood, and then black from the ink of vast libraries thrown into it. In 1258 the Mongol empire led by Hulagu laid siege to Baghdad, capital of the Abbassid Caliphate.  After only 12 days the city surrendered. The ensuing week long massacre resulted in the death of between 200,000 to 1 million by arrows, clubs and swords[4]. Not to mention the destruction of the Bayt al-hikma (House of Wisdom) – a treasure trove of Islamic and scientific literature. It was during this age that the Chinese method of producing paper had reached the city so books were produced like never before. Whilst Europe was in the dark ages, Baghdad became a city with nearly total literacy, filled with booksellers, gardens and libraries.[5] It is from this Baghdad that we have the words “zenith,” “algebra” and “algorithm” to name but a few.[6]

Or let us look at the crusades and the blood-letting which went on until the streets of Jerusalem flowed with blood.[7] There are more examples, yet what each has in common is the despair felt by some within the Muslim nation. However, there were always a few notable exceptions: the visionaries and the rebels. Those who refused to be cowed, refused to be subjugated and refused to be silenced. Brave souls such as Nūr al-Dīn Zinki and Salāh al-Dīn Ayyūbi who brought about an Islamic renaissance.[8] Brave souls who looked to the sacrifice and example of the pious before them as stars to guide them through their darkness. Nūr al-Dīn was Salāh al-Dīn’s mentor. Nūr al-Dīn instructed Salāh al-Dīn to build a staircase for him to give the Friday sermon when Salāh al-Dīn would finally liberate Jerusalem from the Crusaders. A wonderful example of a teacher inspiring his pupil.

Today, some ask ‘when will we have a Salāh al-Dīn?’ or ‘when will we have an ʿUmar b. ʿAbd al-ʿAzīz?’. But we should not fall into this satanic trap. Allāh, al-Jabbār, gave victory to this Dīn through such people, but this Dīn did not achieve victory because of them. Perhaps Allāh will give this ummah glory after its humiliation, through you. After all, none of these heroes of Islām received revelation; they were simply humans with their inherent frailties and fears. Yet what placed them apart was their willingness to place all their trust in the Lord of the worlds without fearing the blame of the blamers.

We should be proud and celebrate heroes such as Tox Sharif and Dr Shajul Islam. Two British Muslims who have sacrificed safety and luxury to serve the bombarded Syrian people. We can support them by sharing their social media posts and donating whatever we can to purchase food and medical supplies. The enemies of Islām want you to cower in fear. But just say no. Refuse to be silenced. Share the images, spread the word; #Idlibisburning. Let them know we have not abandoned them. Share in the grief felt by the father of the unborn child, pierced in his mother’s womb. Remind the Muslims of the words of our noble messenger (sall Allāhu ʿalayhi wa sallam):

“The believers in their mutual kindness, compassion and sympathy are just like one body. When one of the limbs suffers, the whole body responds to it with wakefulness and fever.”[9]

And Moses said, “Our Lord, indeed You have given Pharaoh and his establishment splendor and wealth in the worldly life, our Lord, that they may lead [men] astray from Your way. Our Lord, obliterate their wealth and harden their hearts so that they will not believe until they see the painful punishment.”[10]

Utilise social media which can be a news outlet more powerful than the BBC or CNN. Let Putin, Assad, the Nobel laureate Aung San Suu Kyi know that tonight 1.5 billion supplications from London to Lahore, from Brisbane to Botswana, from Jakarta to Johannesburg will be made to the One who humiliates the unjust. And those whispers, in the still and quiet of the night, will turn into a deafening roar.

The grandsons of Sa’d and Bilāl are a noble, brave and dignified nation. Do not accept humiliation. The night is darkest before the dawn and by Allāh victory is on the horizon. This nation which began with one man in an obscure desert land, rose in a little over a century to command 5 million square miles with the irresistible justice of this perfect Dīn, bringing people—believers and disbelievers alike—out of darkness into light. It will rise from the ashes once again because the Lord of the worlds has promised his servants:

“Before this We wrote in the Psalms after the Message: My righteous servants shall inherit the earth.”[11]

Previous: Tunisia, Reformation and the Reverse-Engineering of the Sharīʿah
Next: Iran sending Afghan child refugees to fight for Assad in Syria