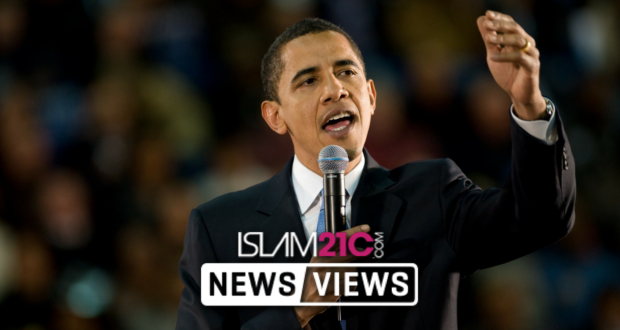 Honouring the centennial of Mandela’s birth next month, the Nelson Mandela Foundation has invited former US President Barack Obama to give a keynote speech.

The first black President of the United States has been chosen to deliver the NGO’s 13th annual lecture, titled “Renewing the Mandela Legacy and Promoting Active Citizenship in a Changing World.”[1]

However the Nelson Mandela Foundation has been urged to withdraw its invitation to the 44th US President due to US military action in the continent during Obama’s presidency.

In an open letter to the NGO’s Chairman,[2] the CAGE Africa advocacy group criticised Obama for greatly expanding American military activity in Africa during his tenure.

In the letter the group condemned Obama for “spreading fear, violence and destruction in particular among Muslim communities, through rubber-stamping over 100 military actions a day throughout Africa.”[3]

The statement by CAGE Africa also accused the Obama administration of piloting “a new kind of colonialism” in Africa under the banner of the ‘War or Terror.’[4]

The letter addressed to Professor Ndebele said that:

“giving this man a platform would be tantamount to condoning these actions, something that Nelson Mandela would surely have stood against”.

“This is especially pertinent given Nelson Mandela’s legacy as an individual who was also once designated a ‘terrorist’ and suffered torture and imprisonment as a result, and who despite this is now regarded as one of the pre-eminent figureheads for justice around the world.”[5]

In response to the letter from ageage Africa, the Nelson Mandela Foundation said that they were “taking the concerns seriously”.[6] However the Foundation did not state if they would reconsider their selection of Barack Obama as the event’s keynote speaker.

The NGO’s spokesperson Luna Nene told Al Jazeera that Barack Obama had been chosen to deliver the lecture as part of the Foundation’s particular focus on the theme of ‘legacy’ this year.[7]

In 2009 Barack Obama was elected as the first Black President in US history. His election marked a long overdue milestone in US politics and his campaign sparked optimism in the United States and further afield, particularly in nations hoping for a change in US foreign policy. CAGE Africa’s letter claims that Obama failed to live up to “the world’s high hopes for him” as he instead “set an unacceptable low moral standard when it comes to human rights and the dignity of local populations.”[8]

Concluding a press release announcing their open letter, CAGE Africa said: “We call on the Nelson Mandela Foundation to adhere firmly to its principles and withdraw the invitation. Not doing so would cause the reputation of the Foundation to be damaged in the eyes of most supporters around the world, since it will set a benchmark that principles are sacrificed for publicity.”[9]

CAGE Africa is a branch of the UK based advocacy group CAGE.[10] In their own words, the organisation “campaigns for the rights of Muslims and others adversely affected by abuses of the rule of law as part of the ‘War on Terror.’”

2018-06-27
Ahmad Jomaa
Previous: Islamophobia is More Than Words
Next: World cup football players reminds us of the long history of political protest