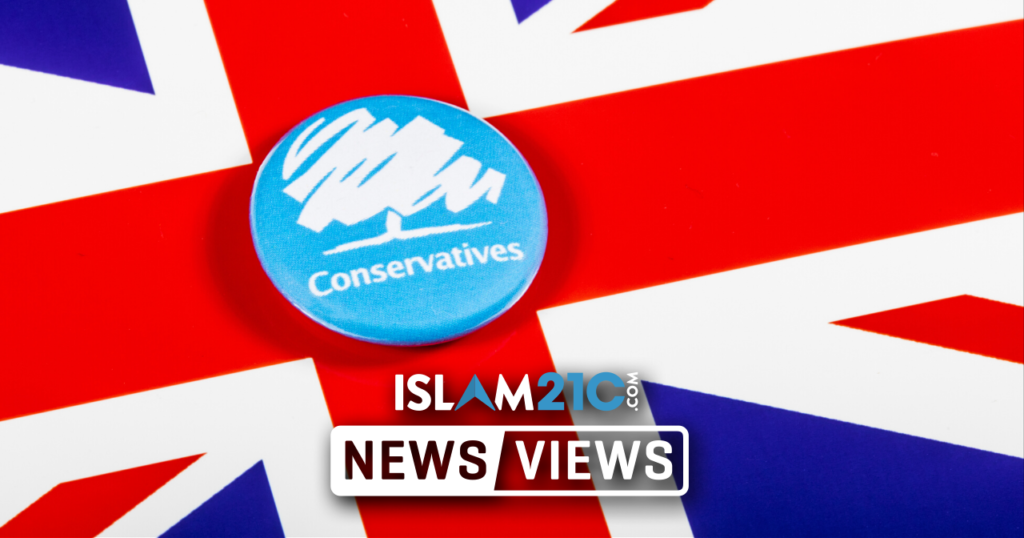 The United Kingdom’s equalities watchdog, Equality and Human Rights Commission (EHRC), has abandoned plans to investigate any of the hundreds of serious allegations regarding Islamophobia in the ruling Conservative Party.[1]

Anti-racism groups, Muslim groups, and critics have slammed the decision by the Equality and Human Rights Commission to abandon a very important inquiry. The Muslim Council of Britain (MCB) has long demanded for the Conservative Party to be investigated, stating that the problem “runs deep” within the Party.[2] It previously submitted a dossier of 300 cases to the EHRC regarding alleged Islamophobia, including allegations against prominent MPs and special advisers.

A spokesperson for the (EHRC) said that because the party itself has said it would probe complaints of anti-Muslim discrimination, “It would not be proportionate to initiate our own investigation at this stage”.

“We will be monitoring the review and requiring the party to provide regular updates on progress. If we are not satisfied with progress or how the investigation is conducted we will review our decision and do not rule out the use of our legal powers.”

The Conservative Party has set out new details of its own investigation. The Terms of Reference for its investigation can be found here.

In response to the EHRC’s announcement earlier this week, the secretary-general of the Muslim Council of Britain (MCB), Harun Khan, said: “We have previously described the Conservative Party’s attitude to Islamophobia as one of denial, dismissal and deceit. The publication of the terms of reference for its inquiry reflects that regrettable attitude.”

“They are a facade to hide the hundreds of incidences of Islamophobic bigotry we have identified in its ranks. In sum, it seems even today, the Conservative Party refuses to acknowledge that there can be bigotry and prejudice directed at Muslims.”

The Conservative Party has previously rejected the definition of Islamophobia devised by the All Party Parliamentary Group (APPG), arguing that it supposedly “threatens free speech and the fight against ‘terrorism’”.[3]

In response to the Conservatives’ rejection of the APPG Islamophobia definition, Islam21c’s Muhammad Mussa states:

“The Conservatives are not concerned with freedom of speech and expression. They are merely using it to shut down the debate surrounding Islamophobia and to not be forced to adopt the definition, for adopting the definition would contradict their policies, laws, and inherent nature and, as such, is unacceptable for them.”

Comments made by people alleging to be Conservative Party members include:

Other comments include calling Muslims “aliens” and “radicals” as well as referring to Islam as a “cult”.[4]

Labour’s MP for Bradford West and Shadow Minister for Women and Equalities, Naseem Shah, commented on Islamophobia complaints within the Conservative Party. He stated that there is “institutionalised Islamophobia” within the Party that exists “right at the top and trickles all the way down”.[5]

In an investigation carried out by The Guardian, dozens of Tory councillors were found to have posted, shared, or endorsed Islamophobic or racist content on social media, referring to Muslims as “barbarians” and “the enemy within”, and calling for mosques to be banned.[6]

However, the EHRC is investigating the main opposition Labour Party’s handling of alleged anti-Semitism within its ranks.

So the Equality and Human Rights Commission are investigating antisemitism in Labour (which hardly exists) but won’t investigate Islamophobia in the Tory Party (which is rampant). What a joke of an organisation. I think someone needs to investigate it for Islamophobia.

“The EHRC has become a political tool of the Tories [Conservatives]. The evidence drops investigation into Tory #Islamophobia whilst continuing to investigate the Labour Party for #AntiSemitism Pure hypocrisy.”

“A terrible decision by the EHRC – the Conservative party’s own investigation, even if proclaimed to be independent, is no substitute for this, just as it would not have been for Labour. The same standards need to apply to parties across the board.”[7]