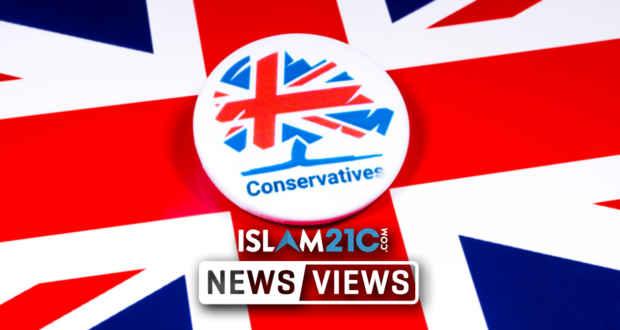 The Muslim Council of Britain (MCB) has demanded the Equality and Human Rights Commission (EHRC) to investigate Islamophobia in the Conservative Party, stating that the problem “runs deep” within the Party. [1]

The letter consists of more than 20 pages, [2] with “over 150 examples [of Islamophobia] cited”. [1] In a statement, the MCB said that its previous calls for an investigation had been largely ignored.

The letter’s timing comes as the EHRC announces their investigation into the Labour Party over antisemitism claims. However, the MCB insists that its timing is coincidental, saying that they waited until after the results of the European Elections, in order to avoid claims of trying to influence its outcome. [1]

“It is a sad day for us to have brought this complaint to the doors of the EHRC, but the concerns of Muslims at large about Islamophobia within the Conservative Party have fallen on deaf ears.”

“We have taken this step after an unprecedented number of cases have been brought to our attention, suggesting a culture within the Conservative Party where Islamophobia is not only widespread, but institutional. We now request the EHRC to look at all the evidence and investigate this matter with great urgency.” [1]

A copy of the submitted letter has been made public by The Guardian and sheds a light into some of the cases put forward by the secretary general. [3] It includes five key areas: Islamophobia amongst MPs; an atmosphere of hostility against Muslim Conservative Party members; the large scale of Islamophobia in the Party; the failure to handle complaints; and the Party’s denial of Islamophobia. He added that “any one of these charges should be sufficient to indicate a serious problem”. [3]

Labour Equalities Minister, Naz Shah, responded to the letter, saying that the complaint highlights an “institutionalised Islamophobia” within the Party that exists “right at the top and trickles all the way down”. [4]

The MCB’s letter comes after the Conservative Party rejected the APPG definition of Islamophobia on the 15th May, arguing that it “threatens free speech and the fight against ‘terrorism’”. [5] It is not the first body to issue complaints regarding Islamophobia either, as a dossier from Conservative Party members has exposed more than 100 accusations of Islamophobia and racism within their Party. Passed to ITV News last week, the accusations included comments that called Muslims “aliens” and “radicals” and refered to Islām as a “cult”. [6]

Although the Conservative Party have yet to respond to these complaints and allegations, one must wonder whether the emergence of documented evidence, as well as fears of hypocrisy amidst the Labour Party’s investigation of antisemitism, will lead to an official, external investigation. Baroness Warsi, having called for an independent inquiry into the Party last July, revealed that her Party previously “refused” to table the number of complaints, and said that the time for an “internal investigation” is at an end. [7]

With Theresa May’s resignation, it is imperative for the issue to be resolved now more than ever. A total of 12 MPs are confirmed to have put themselves forward as the next leader of the Conservative Party, with Boris Johnson at the forefront. Johnson, in particular, is no stranger to Islamophobic remarks, having been under fire for and, then, cleared for his 2018 comparison of Muslim women who wear the niqāb and the burqa to “letterboxes” and “bank robbers”. [8]

Islamophobia in the Conservative Party is a huge issue, not just for Muslims, but for UK politics as a whole. If this issue remains unresolved, one must wonder what example is being set for UK citizens amidst increasing crime rates. [9]

Previous: The exclusive Ifṭār for people named Faisal
Next: Boris Johnson to go on trial for “lying and misleading” in Brexit campaign