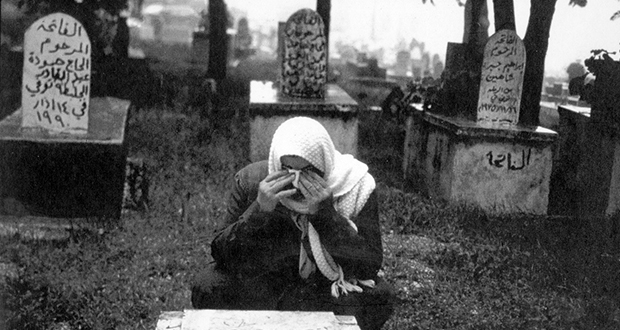 Today humanity across the world marks the 69th year since the ‘Nakba’, termed the ‘Catastrophe’ when ‘Israel’ was officially declared a state on Palestinian land, heralding decades of conflict and apartheid.

Israeli soldiers confronted rallies, attended by Palestinian families with live gunfire, injuring eight Palestinian participants. Marches took off from the city of Ramallah, from the burial place of Yasser Arafat in the direction of a tent erected in solidarity with the 1500 prisoners on hunger strike. Palestinian youth responded to the live gunfire by hurling rocks at the soldiers, stationed illegally on what is still internationally recognised as Palestinian land.

Hundreds of participants carried black banners with the slogan “the Right of Return” and waved large copper keys, symbolic of the homes they were violently and forcibly removed from in 1948. In an address to the gathering, Mohammed ‘Alian Coordinator of the Higher National Committee in Commemoration of the Nakba said:

“Over the course of 69 years, the occupation has succeeded in killing and imprisoning Palestinians, but has failed to break the determination in embodying the dream of a state and of return.”[1]

Likewise in the Gaza strip, numerous rallies took place, taking off from another tent in which Palestinians lay in solidarity with those on hunger strike, abstaining from food and drink themselves. In conjunction with the 69th anniversary of the Nakba, 1500 Palestinian hunger strikers have entered their 29th day without food or drink, still flouted by Israeli authorities who have prevented all but a handful from seeing their relatives, or speaking to lawyers. Marwan Barghouti, the initiative’s spearhead is thought to have lost 13 kilograms since beginning the strike, but has vowed to continue until prisoners’ demands were met.[2]

The anniversary marks 69 years since heavily-armed Zionist death squads, namely the ‘Haganah’, ‘Irgun’ and the ‘Stern Gang’, the latter responsible for repeated attacks against British personnel in Palestine, summarily destroyed over 500 Palestinian villages and towns. Nearly 20,000 Palestinians were executed in 1948 alone,[3] whilst over 750,000 were forcibly removed from their homes. The United Nations Relief and Works Agency estimates there are now some 5 million Palestinian refugees in and around Palestine,[4] some in unlivable conditions and reliant on international aid.

In response to recent demands on the British Government to recognise its responsibility in the creation of ‘Israel’ by 1917’s Balfour Declaration, it stated “we are proud of our role in creating ‘the State of Israel.'”[5]

Share. Facebook Twitter LinkedIn Email Telegram WhatsApp
Previous ArticleAfter Nakba – 9 reasons why it is time for Israel’s retirement
Next Article Why Islam is Spreading in Rwanda