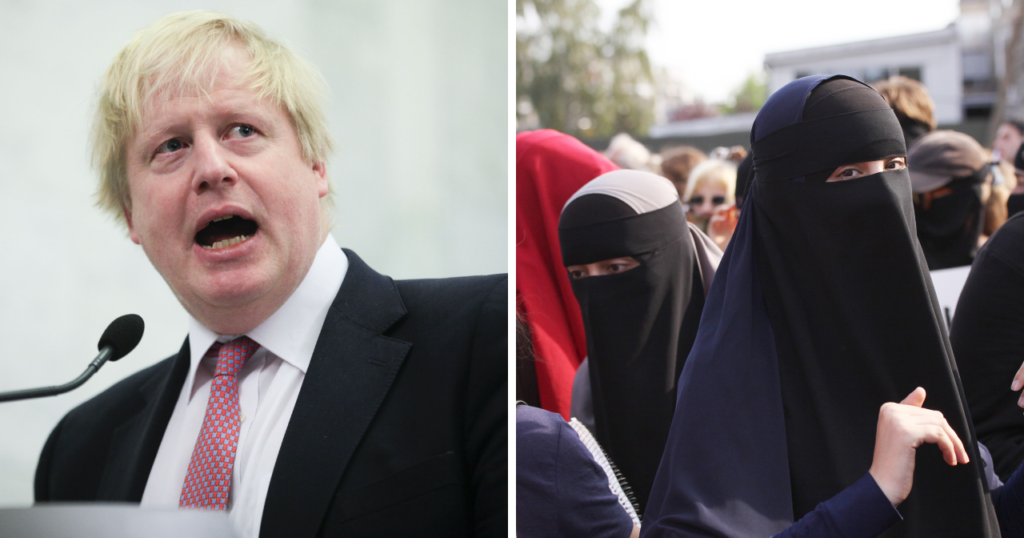 Boris Johnson has been cleared by an independent team employed to investigate the crude comments made about the niqab earlier this summer.  Surprisingly, Mr Johnson wrote the pointless bashing of a religious garment worn by quite a harmless group of women, either for some political agenda, or to add to his list of unintelligent gaffes that he is becoming quite famous for.  Even more surprisingly,  there was some uproar from members of Parliament, including the Prime Minister herself, thus leading to calls for him to be investigated.  And now, days after he was pardoned the most shocking part is the silence met with his clearance and the ludicrous conclusion that despite calling women who wear the face veil ‘letter boxes’, ‘oppressed’ and ‘bank robbers’, he was ‘respectful and tolerant’.[1]

The sheer audacity of this entire incident is disappointing and hurtful.  The boldness for a member of parliament and former Foreign Minister to make clearly Islamophobic comments of this nature proves that the benchmark for Muslims is far lower than other minorities.  Would comments of a similar nature towards Jews ever be considered as freedom of speech or satire?  Even for the one whose idiocy has won him much fame, it is unlikely he would ever dare try.

On the same day, the newspapers included a story about a midwife who was sacked for having bright red hair,[2] and another about transgender men who were told to use the gender-neutral toilets instead of the men’s.[3]  These examples prove that whilst Britain becomes more extreme in its fight for some minorities’ rights, it continues to overlook niqab-wearing women, even when it is their safety at stake.

So where have we gone wrong?  Why does the benchmark fall shorter for Muslims and why are we made to look like the only minority against the norm?  I do not have the answers to these questions, but I know that we must seek them out, and that we must try our best to promote our Dīn and show it for the excellence it offers.  Each one of us can make a difference to the people we encounter, and whenever possible, respond willingly and intelligently to questions about controversial and misconstrued matters of our Dīn.

Let me elaborate on the issue of niqab, in case someone is asked about it again:

Women wear the niqab for religious reasons and trying to ascertain whether her choice is right or wrong should not be anyone else’s business.  Why a debate is needed on the niqab and not on why Sikhs carry knives or Jews shave their heads for wigs, or why people change gender is selectively discriminating against Muslims and their freedom to dress as they wish.

If however, someone is asking genuinely to enhance their understanding, then there are many reasons for why a person makes this choice, including, abiding by an accepted interpretation of Allāh’s commands, love of the sunnah and way of the companions, to cover from non-mahram men in a highly sexualised society, to signal that they do not want male attention, and so forth.

Should England hold a national debate on this matter, then the answer is clearly NO.  Apart from singling Niqab wearing women out of an extremely diverse and accepting culture, we are asking people who have probably never encountered such women to conclude their fate. And with an undoubtedly biased coverage by media, there is little chance for people to come to a fair opinion.

The niqab-wearing women that I know are largely educated, British-born and law-abiding citizens.  To make that clearer, they are totally capable of deciding how to dress; they are women so in this modern society their choices should be celebrated and lastly,  they are simply not harming anyone by wearing a veil for purely religious reasons.

Women in niqab should be ready to prove their identities for security reasons, and have done so in airports and banks, and so on.

The consequences of ridiculing or openly criticising aspects such as the niqab selectively, can be quite serious.  Hate crime rises after such incidents, as comments such as those made by Johnson emboldens racists. Frankly put, if men in suits can slur Muslims whilst in top positions, then what is stopping skin heads or groups of youths on streets from picking on a woman on her own, or worse still, with her young children?  How about the parent at school who slams the door harder in your face, or the teacher who purposely avoids eye contact as you patiently wait to address some issue about your child.  Given the chance, people rendering such hate can abuse this leeway towards Muslims to make sure they are met with trouble.  What if that person is a policy maker of a public area or a police officer?  Just our luck that the panel investigating Johnson probably held similar bias.  By lowering the benchmark of tolerance for a group who are seemingly weak in the eyes of politics, Britain has warranted Islamophobes to a justified hatred and worse still, acting upon it.

My final line is to remind myself and others to educate others  by writing to those who support justice, writing to those who are ignorant and by continuing to contribute to society by being upright, honest and friendly. Small examples include positive responses that I received after writing to the Muscular Dystrophy UK charity for dismissing a racist for her comparison of niqab to the KKK,[4] and even a thankful response from some nasty MP to whom I once wrote in order to correct her misconstrued comments.  We cannot tackle the rise of hate that England is being swamped by, but we can address ignorance and rise above it by employing the diplomacy and good conduct that good British culture and most of all, our beautiful religion promotes.