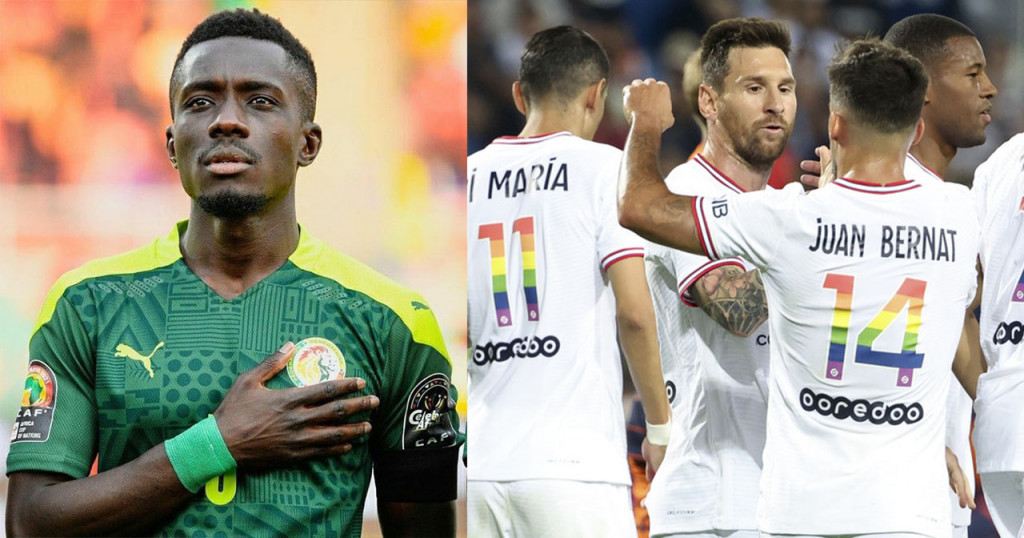 We want your superior speed, strength and discipline, but you must adopt our beliefs and cultural norms—which we inherited by complete historical accident, by the way.

This is effectively what the French Football Association has said to Senegalese Muslim footballer Idrissa Gueye when he chose not to attend a match wearing a t-shirt expressing a symbol of LGBT ideology.

Their tone is particularly arrogant, as expected:

It’s easy to chalk this up to the fantastically racist and Islamophobic nature of France—after all, ~42% of them voted for Marine Le Pen just a few weeks ago;[2] and the forcing of White western cultural attitudes and beliefs on black and brown people has always been a staple colonial impulse.

(By the way, so as not to go on a tangent I’m restraining every mockery-bone in my body not to explode at the laughable hypocrisy of a society that forces women to undress in order to get an education or work in the public sector under the banner of “secularism”, demanding colourful clothes to extol the their own inherited religious dogmas. You’re welcome.)

However, other European football clubs are also carrying out detentions for their naughty African players caught showing a bit too much public Muslimness on social media. Watford Football Club said they would offer Ismaila Sarr some “education”,[3] while Crystal Palace manager Patrick Vieira said he “will speak to” Cheikhou Kouyate,[4]for daring to show support to a Muslim brother under attack.

They weren’t the only ones. It seems Gueye gave sentiments simmering beneath the surface the courage to spill out, with hashtags like #jesuisidrissaganagueye and #WeareallIdrissa reportedly trending globally on Twitter.

Why are proponents of LGBT ideology so intolerant?

The short answer is most people don’t realise that what they are upon is pure ideological and cultural products packaged as Ultimate Universal Truth. They have been sold a narrative that only allows two characters in this story: the enlightened LGBT ally and the backwards homophobe who simply awaits enlightenment.

It takes patience and reading more than 280 characters to recognise—let alone challenge—the Eurocentric (I would argue White supremacist) discourse that underpins that story. LGBT ideology relies on inheriting a plethora of philosophical baggage from western Christianity concerning things like:

It’s no small feat telling a people who have never tasted the sweetness of fasting a day in their lives, for example, that there’s something beyond worshipping and obeying the impulses that emerge from the most primitive parts of your brain and central nervous system. Desires are some people’s god, to resist their material impulses is blasphemy.

Have you seen the one who takes as his god his own desire? Then would you be responsible for him?[5]

It is especially difficult if some people have been conditioned with centuries of knowledge that has put a burden on them to dominate instead of learn from other peoples.

This is not to lampoon everyone in the West. The most piercing critiques of LGBT ideology are from western scholars, after all. It was people like Foucault who masterfully chronicled the invention of sexuality and its derivatives (homosexuality AND heterosexuality)—now one of the central tenets of Queer Theory taught in university campuses across the West today—leaving many of us Muslims wishing we were able (and permitted) to speak so eloquently and fearlessly on the topic.

“Homosexuality appeared [in the 19th century] as one of the forms of sexuality, when it was transposed from the practice of sodomy onto a kind of interior androgyny, a hermaphrodism of the soul. The sodomite had been a temporary aberration; the homosexual was now a species.”[6]

Unfortunately, like so many things there is a long delay between what happens in academia, and popular culture and policy, which are more about power and influence than truth.

So why are Muslims scared of a rainbow?

The rainbow can be seen as conceding to the Victorian fairy tale that human beings are indeed individuated across magical rigid, discrete, deterministic and permanent categories called “sexuality”, rather than what the entirety of human history—including science today—has constructed the human being up as: a creature that is capable of controlling material impulses and choosing its own behaviour. We Muslims do not believe we are forced to act by some magical invisible and undetectable property that the Victorians were kind enough to bequeath to the rest of the world (through violent imperialism).

People are free to argue that their inherited customs, cultural effects and beliefs are true. But if they have to resort to obfuscation, misleading slogans, bullying and coercion to spread those beliefs and norms, they should pause and reflect.

A Muslim’s refusal to wear symbols of LGBT ideology is their daring to reject the Victorian inheritance. “Thanks, but no thanks.” “We don’t want to adopt your cultural norms and beliefs.” If our detractors have any sound argument based on evidence that isn’t effectively “this is what our forefathers were upon”, then we’re happy to hear it.

But in the absence of that, we will stick to the tried and tested values that showed the human species a far more tolerant, truly diverse, sustainable, and objectively more successful way of life to build societies and civilisations, instead of the confused hodgepodge of western culture wars that some are trying to drag us into.

Muslims are here to stay whether some like it or not. Those that care about actual tolerance and diversity would do well to approach Muslims as equals, even if they are not yet prepared to critically look at their own inherited discourses, customs and beliefs. When they are ready for tolerance of genuine diversity (of thought, ideas and discourse) rather than superficial diversity (of choosing between pre-approved White western constructs), Muslims will be here, happy to say as we have been for the past 1,400 years to our interlocutors: