While the Argentina captain Lionel Messi was adorned with the bisht by Qatari Prince Tamim bin Hamad al-Thani, the hypocrisy of its critics was stripped bare
Opinion 22/12/2022No Comments7 Mins ReadBy Ahmed Hammuda 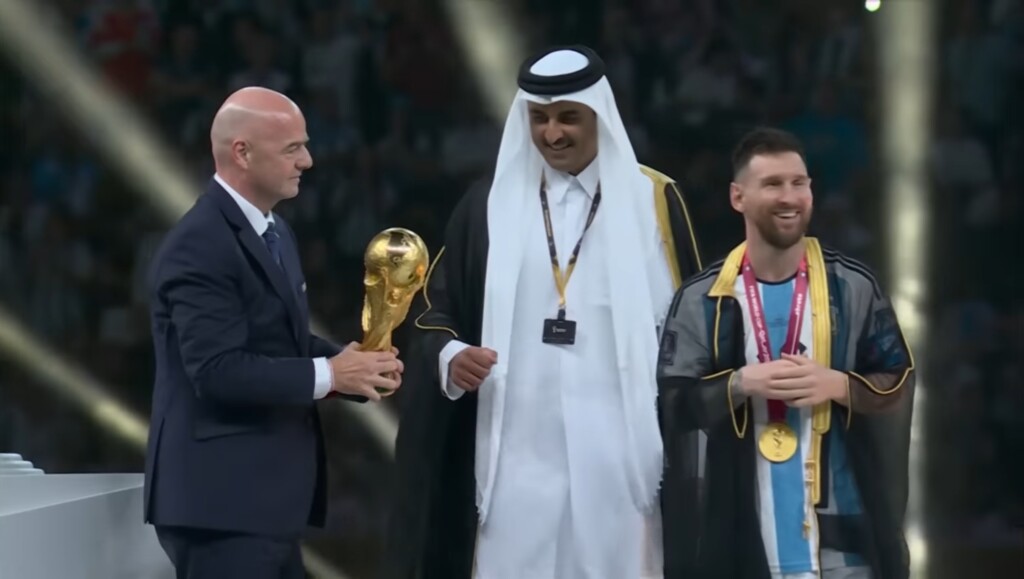 Ahead of the World Cup Germany–Japan match on the 23rd of November, 11 German players posed with their mouths covered, protesting the ban on the ‘OneLove’ LGBT+ armbands. This cringe-worthy pantomime featured repeatedly on the BBC’s outro after the thrilling World Cup Final between Argentina and France, alongside other intimidating political messaging aimed at the host nation, Qatar.

Much of the thrill of the tournament and its lead-up were spoilt by unending jibes at Qatar, from its rules on alcohol and dress-wear, to its position on the LGBT+ agenda.

The mesmerising penalty shootout eventually fell in the favour of Argentina, headed by their world-class superstar, Lionel Messi. During the ceremony, the football legend was dressed in an Arab bisht by the Emir of Qatar, Prince Tamim bin Hamad al-Thani, before being handed the golden trophy.

In his last-ditch effort to detract from the host nation’s superb World Cup execution, – possibly the best ever [1] – BBC anchor Gary Lineker dropped the uninvited line that it was…

“…a shame in a way that they’ve covered up Messi in his Argentina shirt, just why? No reason to do that.”

Germany’s photographed mouth cover-up was, of course, not just alright, but the feature of the moment.

‘Saint’ Gary, as nicknamed by Nigel Farage, has been unrelenting in his criticism of the tiny nation. Social media moral warriors mimicked him in taking to the ‘nasty’, ‘weird’, ‘sinister’, embroidered prince’s cloak, the bisht.

According to Lineker, the BBC’s highest earner at £1.35m per year, and who received a thumping £1.6m during the four years working for Qatari- sponsored Al-Jazeera [2], the World Cup suffered from:

“…significant issues… obviously with human rights issues, what has happened with the building of the stadiums and workers’ rights and homophobia and various things they have here.” [3]

On another day, I’d have unpicked the BBC’s tectonic hypocrisy and preposterous reporting throughout the World Cup. Especially as some of their Qatar-based reporters childishly brandished their silly rainbow armbands in television interviews.

This is without mentioning the same utterly disrespectful and hypocritical ‘inclusive’ BBC that chose not to show the opening ceremony of the World Cup for the first time in the modern era of football coverage.

But in all honesty, time is best spent giving up on this pathetic service, which, at the best of times, has become a sacrilegious propagandist pathogen, and a cheap bum show later in the day.

How can it begin to lecture us on morality when the TV licence that it survives on is effectively digital piracy? Needing to pay a fine to the BBC for watching any live TV is like needing to pay Samsung to use an Apple Mac. Whether you watch Punjab Live or Al-Jazeera, you’re fined by the BBC pirates to then be schooled on morality.

Maybe these pompous moral knights should have celebrated the bisht as it just about “covered” a jersey that was probably manufactured by workers in Bangladesh and Cambodia on 62p an hour. [4]

Such a shame to cover that shirt with the suit jacket… https://t.co/JcSoGEuTzb

The bisht is, in actual fact, an emblem of honour and respect. The non-bigoted eye may have even spotted that Prince Tamim was wearing one himself. Lionel Messi was cloaked like a prince, like the prince.

The ancient cloak was classically worn by Arab soldiers, according to Greek historian Herodotus (5th Century BCE), and some say even Jesus Christ (ʿalayhi al-Salām) wore one. It is the cloak of tribal chiefs, kings, and royalty.

Nevertheless, the translucent Arab bisht hurt the feelings of many social media keyboard warriors. It somehow covered the 5ft 7in Lionel Messi, despite being submerged in a sea of other players when he lifted the trophy, anyway.

The bisht stripped the hypocrisy bare

As for Lineker, to perversely read an emblem of respect as a sinister attempt at spoiling a champion’s moment follows the same theme of the ludicrous attacks on Qatar. It is as if to say,

“We don’t only dictate what you should and shouldn’t allow, we also dictate your ceremonial methods of respect.”

The whole fiasco of ‘gay rights’ was never about allowing or disallowing gay-inclined football fans. There was no way anyone would have found out that any two football fans were that way inclined. It was instead about Qatar needing to show the extent to which it was willing to capitulate to the ‘master’.

By allowing a cataclysmic defiance of Islamic (and general moral) conduct, public sodomy, or at least the promotion of the rainbow flag, it would have demonstrated how much of a slave it actually is. Any lesser thing may not have achieved that intended outcome. The frustration was not borne of the restrictions imposed by Qatar, but of its attackers’ cataclysmic failure to confirm their master-slave delusion.

Qatar’s “rude shock” [5] ban on alcohol in its stadiums caused outrage. But again, this was not about any genuine need for the depressant drug – responsible for chronic illness and over half of all violent crime in England alone [6] – but about proving the same cultural hegemony on the small Muslim nation. If the devil’s drink is a staple diet in the heckler’s small world, so too should it be in yours.

People often forget that the ‘OneLove’ LGBT+ rainbow armband that northern European teams obsessed about doesn’t only promote lifestyles that Islam (and all Abrahamic faiths for that matter) totally reject, but also contains a ‘plus’ which is a mysterious short-hand for practically an infinite number of sexual fetishes. [8] Isn’t it ironic then, that we’re the ones lectured about being blind followers?

The Muslim, the African, the Arab, the Asian, or the non-European need to be toddled on, as former colonised people. They need to become the blind promoters of the fetishes of the coloniser class, even if hidden behind a mathematical operator.

Muslims have never sought to impose the Divinely decreed lifestyle on others, how ironic is it then for others to try to impose and contaminate them with their decadent diseases? If any of the two had the right to imposition, most (I hope) would agree that it would not be the decadent one.

If the World Cup in Qatar demonstrated one thing, it is that the Muslim ‘culture’ is indomitable. And it has finally dawned on the many fed up of the morally dissipated modern world that Islam is indomitable because it comes from the Creator of the heavens and the earth.

Despite our first reservations about Qatar hosting the World Cup, the world has reaped unending positives and droves have found their way into Islam through their experiences of the faith and its people. [9]

Hosting the World Cup was never going to be an easy feat for a country slightly bigger than Hawaii, just out of a strangling Gulf-wide boycott between June 2017 and January 2021 and an inexorable media campaign against it. Qatar has its many issues, but on this occasion, it smashed it.

The World Cup was a seamless display of cultural and logistical class. The Qur’ān beautified the opening ceremony, the call to prayer boldly filled the horizons for every salah, no concessions were made to the ‘woke’ parade, and it remained resolved on its values and true to its ideals.

Rather than the usual spectacle of drunkard fans battering each other with metal poles, hooliganism was nipped in the bud and families and women in particular felt safe and welcome. Alcoholism and moral decadence found no place and no English fans were arrested [10] for a change. The stadiums were impeccable, the security was extraordinary, and the experience was unsurpassed.

[7] Resemblances in the Iblis story with Adam AS