Qatar has bitten the bullet and faced the ferocious heat of the West's hypocritical hyperbole, but the tournament continues to be a smashing success, argues Abu Aafiyah
Opinion 02/12/2022No Comments11 Mins ReadBy Abu Aafiyah 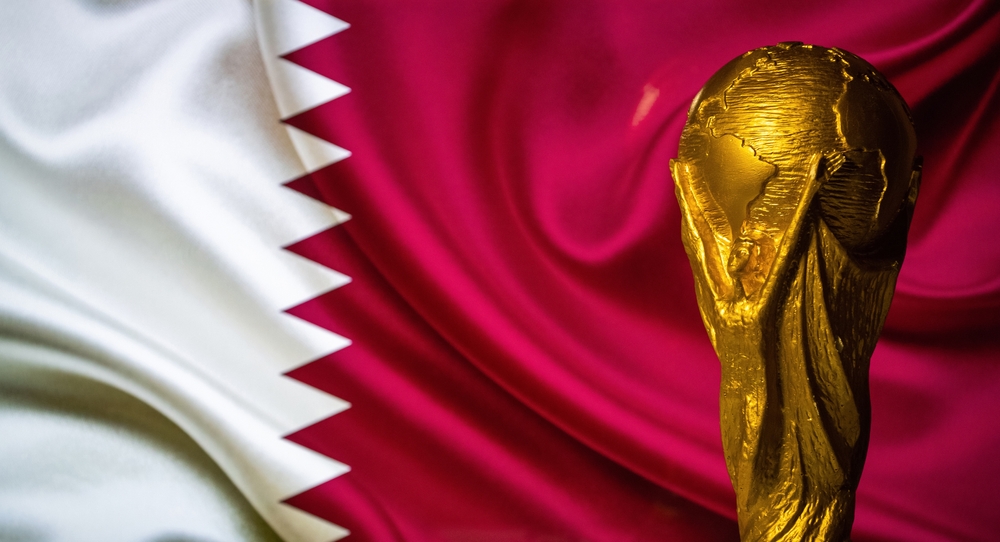 With the group stages over, the FIFA World Cup, the world’s most watched sporting tournament, has not been short of controversy and debate. Usually, in the run-up to the World Cup, debates and discussions are around which country will win and how star players are going to perform, but this time it has been about anything but football. This World Cup has been like no other. It will be remembered.

For the first time ever, it is being hosted in the Middle East and in a Muslim majority nation. It is a moment that should bring joy to Muslims globally, as it brings exposure to the faith and an opportunity to spread Islamic culture and values to the rest of the world. Unfortunately, the excitement and anticipation has simply been marred by Western media reporting and virtue-signalling by European politicians, pundits, and prominent journalists.

The awarding of World Cup hosting rights to a nation should come as a moment of jubilation due to the global attention the given nation gets, and the opportunities to connect with other nations. To forge stronger diplomatic and trade links is invaluable, not to mention the economic benefit a nation and its people reap for hosting a major tournament such as the World Cup.

However, for Qatar, this moment of jubilation and happiness has been spoiled by relentless attacks from the moment the bid to host the World Cup was awarded by FIFA in 2010, all the way up to the opening ceremony.

The reason used by the virtue-signallers – that are the media, some politicians, football pundits and whomever else that have weighed in on the issue – is that Qatar apparently has a disastrous human rights record.

There are two big issues with regard to human rights. Firstly, the criminalisation of homosexuality; and secondly, workers’ rights and the deaths of migrant workers.

The criminalisation of homosexuality is the defining issue that has dominated headlines, discussions in the office, and has even affected football players and teams playing in the World Cup. Many people have taken different stances on this issue, with some calling for a boycott, others calling for the wearing of “One Love” armbands that display the rainbow symbol in support of the LGBT community, and then there is another group calling for respect of the laws and rules of the land.

It’s interesting to note that the media narrative, including mainstream commentators and conversations, view Qatar (and by default, the Middle East) as a ‘backward civilisation’, simply because it does not accept homosexuality and tolerate it. The same group also claim that there are anti-LGBT laws in Qatar’s statute books.

In actual fact, Qatari officials have clarified that this is not about being ‘anti-LGBT’; rather, it’s about public displays of affection (PDA) – something which irrespective of sexuality is deemed unacceptable in a Muslim, conservative society.

For nearly three centuries in Britain, the Buggery Act was the legal mechanism used to execute many men up until said law was repealed in 1861. [1] While, in contrast, there is no record of any execution or punishment of anyone breaking the ‘anti-LGBT’ laws in Qatar.

The laws of the Middle East are underpinned by divine law (the Sharia) and cannot be compared to the brutal and unjust medieval laws of the West and its application of the same. The collective Western media sell the narrative that the Middle East (i.e. Muslims) is stuck in the medieval era due to the preservation of the Sharia in the statute books.

There are approximately 72 nations that outlaw same-sex relations, not all of them are Muslim. These nations are spread throughout South East Asia, the Pacific Islands, and the Caribbean Islands, along with a great number of African nations from north, south, east, and west of the continent. The nature and application of the law does differ according to the specific country, but it clearly depicts an image that ‘anti-LGBT’ sentiment in society still exists as the norm in huge parts of the world. The notion of the nuclear family and the sanctified bond between a husband and wife still prevails and dominates global society.

In February 2021, with regards to the issue of workers’ rights, the Guardian highlighted concerns that “6,500 migrant workers have died in Qatar since [the] World Cup [was] awarded”. [2] The headline has since been debunked for its inaccuracies, but the damage was already done since the title went viral. People simply saw Qatar and its stadia and immediately linked the deaths of migrant workers to them.

This point has been further clarified by Qatar 2022 World Cup chief Hassan al-Thawadi in a recent interview with Piers Morgan. al-Thawadi said that there have been 400 deaths linked to the construction of stadia. Over twelve years, the number of deaths works out to be not too different to deaths in UK construction sites.

The UK’s Health and Safety Executive (HSE) revealed that 30 of the total 123 work-related deaths in 2021/2022 occurred in the construction sector, which averages to about 2.5 per month. [3] Considering the health & safety regulations, trade unions, and legal protections afforded to workers in the UK, this number should be staggering, yet there is no outrage about this in mainstream media.

You could actually argue that Qatar is performing much better when it comes to worker welfare, taking into consideration the lack of legal protection which exists in comparison to the UK. Of course, more can be done to improve the welfare of migrant workers in Qatar and this has been acknowledged by al-Thawadi.

Again, the hypocrisy and double standards is blatant. When it comes to migrants, trafficking is rampant. In November 2021, 31 people drowned after a dinghy capsized in an attempt to cross the English Channel from France to England. [4] There have been accounts of asylum seekers being unable to seek proper medical attention while they suffer in hotels. A councillor in Peterborough said that Afghan refugees are riddled with scabies and infections with no medical input and no recourse to NHS care.

The duplicity of the West is extremely abhorrent when it comes to human rights and its application of the same. Whether it is the invasion of sovereign lands and its associated economic exploitation during the colonial era, or more recently the illegal war in Iraq, or the detention and torture of innocent people for years without any charge or trial, or the current sickening rights record for asylum seekers and refugees trying to seek sanctuary in the UK, the hypocrisy is palpable.

The UK and the West in general are not in good standing to start lecturing or teaching other nations on how to behave in relation to human rights. Quite a number of commentators have recently hit back on the media narrative of ‘virtue-signalling’ by asserting that we need to get our house in order first, before we start lecturing others.

Some of the hypocrisy and double standards have been explained and can be exposed by posing the following questions:

It seems as though Qatar are reviewing their investments in London, looking to redirect them to other cities as a result of the Mayor of London’s comments and Transport for London’s stance on banning Qatari adverts on London buses and trains. [5]

Over the last 20 years, British Muslims have been subjected to marginalisation as a community, through Home Office policies such as Prevent, and the Terrorism Act of 2000 and its notorious Schedule 7 powers. The heavy-handed monitoring and surveillance of the community has not only been an attack on British Muslims, but also an attack on Islam and our way of life. This includes the ability to fully express ourselves.

British Muslims find it difficult to be patriotic and buy into the good aspects of Britain and its so-called pluralistic, multicultural, vibrant, and diverse culture, because of the systematic Islamophobia and marginalisation that they feel, especially when then former Foreign Secretary Boris Johnson described veiled Muslim women as “letter-boxes”. [6]

So why do British Muslims stand with Qatar?

The bond of faith (īmān) will far outweigh any bond of language, culture, and citizenship for Muslims. Muslims are a global family of 2 billion and growing in number. As Qatar – a Muslim nation – is attacked by the media, heads of states, pundits, and celebrities, purely because of their unequivocal, principled stance on an issue that is fundamental to their values and the values of Muslims across the globe, surely British Muslims will feel the effects of those attacks.

When Muslims are being colonised, evicted from their homes, sent to concentration camps, made refugees overnight, and being killed, tortured, and systematically massacred just for believing in “lā ilāha illa Allah”, British Muslims feel a deep pain in their hearts. How are the same British Muslims supposed to get behind their nation when the democratically elected head of government is seen shaking hands with genocide enablers and executing trade deals with them?

British Muslims are fed up with the UK’s foreign and domestic record, especially when the UK can show real leadership in standing up to an aggressor like Putin occupying Ukrainian territory, yet show no such leadership on the Israel-Palestine issue.

Despite the hypocrisy and duplicity of Western nations, British Muslims are in fact happy that the World Cup has gone ahead and that more and more reporting from fans travelling to Qatar are feeding back overwhelmingly positive stories of hospitality and generosity.

Qatar has bitten the bullet and faced the heat of the West, but the tournament going ahead has been a great opportunity to spread the message of Islam via the free gifts given to fans. Fans from the USA to Argentina and Europe have said that they received informational pamphlets about the Prophet Muhammad (ﷺ) from Qatar and they intend to learn and read more about the Messenger and about Islam.

Ironically, the Welsh Football Association and the Welsh devolved government have been two of the most vocal proponents against Qatar, due to its stance on LGBT issues. Their anthem for the tournament is a forty-year-old song that relates the struggle of the Welsh people, its culture, and language. This is the chorus:

“Despite everyone and everything, we’re still here.”

For Muslims, there are other words that can be quoted and these are the divine and greatest words from the Creator.

“It is He who has sent His Messenger with guidance and the religion of truth, to show that it is above all [other] religions, however much the idolaters may hate this.” [8]

“But they plan, and Allah plans. And Allah is the best of planners.” [9]

British Muslims know, no matter how much injustice and marginalisation they face – be it through domestic or foreign policy – the religion of Allah, the Truth, will not be affected in any way. The plans of the wider world to discredit Qatar and this World Cup have so far ended up being futile as so many travelling fans have experienced the beauty of the adhān (the call to prayer), the culture, and most importantly, the religion and how a Muslim society functions.

Globally, this can be a turning point in how Muslim minorities are treated, as more and more people learn, understand, and respect Islam.