"What exactly is his crime?" – Mohar Ali's arrest has left an entire community shaken and fearful of further targeted attacks by BJP-affiliated politicians and authorities
News 01/12/2022No Comments7 Mins ReadBy Shaheer Choudhury 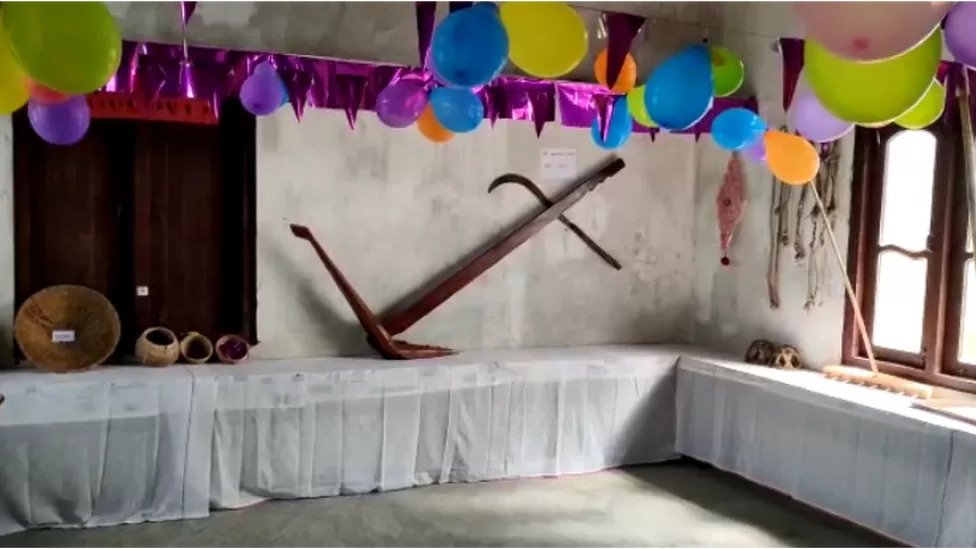 An extremely modest private museum has been dramatically shut down by the authorities in India’s northeastern Assam state, just days after it was opened. The museum, which was established with ₹7,000 in funding by a local Muslim political leader, had been intended to display some of the local area’s traditional clothing and agricultural tools. [1]

The man behind the museum, Mohar Ali, is the leader of a local political party; alarmingly, he was arrested by police in October and reports suggest that he has yet to be released. [2]

Ali, an activist, President of the All Assam Miya Parishad, and member of the Bengali-speaking Muslim community of Goalpara district in Assam state, had intended to open a small museum in his home to celebrate and display traditional items including a weighing scale, shovels, fishing equipment made of bamboo, woven baskets, and traditional Bengali clothing such as the gamsa. [2]

However, the authorities were clearly displeased with Ali’s actions and accused him of converting his government-provided home in order to reap commercial gain. The police later arrested him and two others involved in the establishment of the museum, seemingly not on the conversion of part of his home but on unwarranted and separate charges of terrorism. Mohar Ali’s mother, Mohiton Bibi, has been anxiously waiting for her son’s release. She tearfully posed the question, “What exactly is his crime?” [1]

A long history of anti-Bengali sentiment in Assam state

Historically, the Indian state of Assam has been a flashpoint for anti-Bengali sentiment and conflict with the Bodo and other indigenous peoples. And despite the state being home to a sizeable spread of around 9 million Bengali Muslims and 19 million Hindus – as of the 2011 census – anti-Bengali views have been continually entrenched and exacerbated in the area since the 1940s. [3]

To this end, some have peddled conspiracy theories that suggest neighbouring Bangladesh is scheming to increase the Bengali population in Assam and other border states in order to one day amalgamate the country with Indian states that are predominantly Bengali. [4]

What is in a name?

The honorific title, Miya or Miah, is often used throughout South Asia to describe Muslim men; it is also a common surname. In general, Miya is a Bengali word that refers to a gentleman.

However, in Assam, the word is sometimes considered offensive as those who are anti-Bengali misuse it to describe poor agricultural workers who historically moved over from eastern Bengal, which is now located in Bangladesh.

To offer an example of the anti-Bengali violence witnessed in the state, the 2012 riots in Assam saw ethno-communal violence that resulted in at least 77 people killed and over 400,000 displaced from hundreds of villages. The devastating riots that took place between July and September of that year were blamed by Bharatiya Janata Party (BJP) politicians on immigrants from Bangladesh. During the tense few months, soldiers had been given “shoot on sight” orders for anyone seen violating curfews. [5]

The killing of Moinul Haque

In September 2021, a government photographer was recorded viciously stamping on and kicking a motionless Muslim man, as he lay wounded following Indian troops having shot and beat him with wooden batons.

The attacker, Bijoy Bania, is understood to be a photojournalist who was invited by the Darrang district to “document” the Assam state government’s then ongoing eviction drive against “illegal encroachers”. [6]

30-year-old Moinul Haque (raḥimahu Allah) was a father-of-three and vegetable seller who supported his elderly parents and had been infuriated by the Assam government’s claims that his home was on land that did not belong to him. In evicting him and his family, Haque had come out to confront soldiers and this ultimately led to his tragic death.

The above examples of recent communal violence are tragic as standalone cases. However, the so-called Nellie killings of February 1983 were possibly the worst example of violence against Muslims in India, since the Second World War.

In central Assam, a massacre was responsible for the lives of an estimated 10,000+ Muslims (according to some accounts). The pogrom was believed to have occurred due to ongoing anger at Bengali residents in Assam, who many continued to accuse of being immigrants from Bangladesh.

Some researchers have suggested that the mass murders were a direct result of then Indian Prime Minister Indira Gandhi’s decision to grant 4 million Bangladeshi immigrants the right to vote in the upcoming state elections.

Did you know that Bengalis make up the second-largest ethnic group of Muslims after Arabs? Indeed, as of 2013, the British-Bengali Islamic scholar, writer and literary critic, Muhammad Mojlum Khan, put the estimated worldwide population at 200 million. In the years since, this figure has no doubt increased further. [8] [9]

While the Bengali Muslim community in Assam – referred to as the Miya people – are understandably shaken and concerned for their safety following Mohar Ali’s arrest and terrorism charge, the closure of the museum in Goalpara district is a clear reflection of India’s continued attacks on Muslims. And in particular, under Prime Minister Narendra Modi, political attacks against Muslims have worryingly become an effective and encouraged tool in engaging with the Hindu electorate.

Politicians and police in the pocket of the BJP

When the killing of Moinul Haque triggered condemnation from around the world, Darrang district’s Superintendent of Police, Susanta Biswa Sarma – who happens to be the brother of Assam Chief Minister Himanta Biswa Sarma – sought to shield his men, telling the Indian Express paper that his officers “did what they had to do” in “self-defence”. [7]

At some point, Susanta took charge of Goalpara district as Superintendent of Police, but it was reported that he was later relocated prior to the 2021 elections, most likely to avoid issues around undue influence, as Himanta was standing for the position of Chief Minister of Assam at that time. [10]

Dr. Hafiz Ahmed, a scholar and community worker, said of the museum closure,

“Muslims of Bengali origin have become a soft target of politics. The idea is to show to the majority [population] that Miya people are not a part of the Assamese society – they are enemies.” [1]

It is worth emphasising the point, that the museum was extremely modest in nature; it was housed in a small room and had been lightly decorated with some overhead balloons and a few tables displaying various traditional Bengali items. Why would the authorities object to the display of the local culture?

One might argue that the authorities felt threatened by the idea that a local leader would choose to take such steps in the face of continued openly anti-Muslim policies and behaviours, including from supporters of the extremist Hindutva ideology.