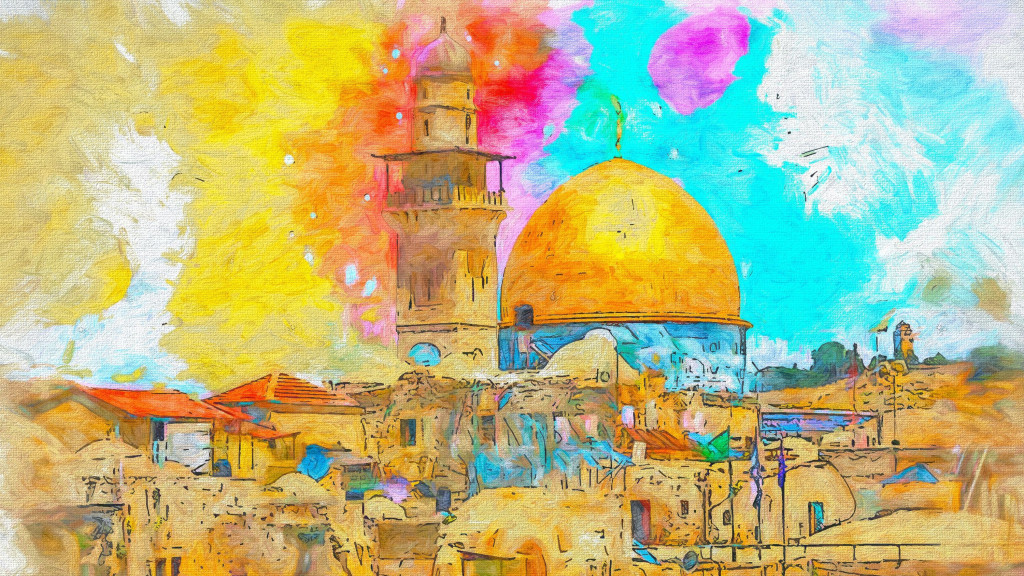 At Quds a land for hearts so pure
Jerusalem, till end endure

Each inch a tale, each span a song
Of nations gone, of time so long

For saints to come, the earth prepare
For Abraham, to rest right there

The Patriarch, the Lord’s close friend
Each man lay claim, each tribe contend

For not by kith, nor blood so near
But by his way, those near adhere

And those most close are those who tread
His perfect path, ‘Hanif’, it’s read

Recall Jacob, in Isaac’s stead
At death his kin, around his bed

In Palestine, glancing ahead
Which creed will you, preach to and spread?

They said in truth, “as you foresaid…
The Lord, Allah, as Muslims bred”

His children, twelve, then led the way
To Egypt’s Nile, for brief a stay

The loin which bore the mighty man
To whom God spoke, to meet His plan

To Sinai flee, with all your clan
Hold my command, when come Can’aan

Leave one, Yusha’ of Musa’s choice
To cleanse the land, with sword and voice

As ‘Pure’ by name, its filth eject
And thus does Quds, true men, elect

Their worth is not in blood nor name
But righteous ranks, else each the same

While Israel held to Yusha’s path
Prevailed they were, else saw God’s wrath

Till David’s time, with son unite
The warring clans in unmatched might

And raised the House, a splendid sight
To hail God’s name from dawn till night

For man to yearn to pray despite
His every need, on this praised site

Forgives one’s sins, if though they blight
The sun and moon in cosmic height

Then when had passed the Prophet King
Came tens, if not did more God bring

Until Jesus, God’s Will and word
In Mary’s womb, when East she stirred

A man of truth and strength and though
So tender, kind for those who know

O Israel hear, your Lord is One
He has no like, begot no son

To Him I bow, your idols shun
And with me kneels, the moon and sun

He is your Lord, besides Him none
To truth hold firm, to His grace run

Make pure your hearts for good deeds done
Life is not lost, if ends are won

And though he preached, each day, each night
Most still defied – from truth sins blight

Then sought to kill God’s word in spite
For sure they knew, the wrong from right

For God saved Christ, and rose him high
To come again, his time is nigh!

Ahead of he, the last of those
A Prophet praised, the one He chose

At night so calm, to Quds he goes
Upon the rock to his Lord rose

In Quds he stood, before each row
Of Prophets since all time ago

Each side by side, at span of bow
At Quds’ square, on raised plateau

Muhammad led, to him each owe
A pledge to trust, his truth follow

And Aqsa’s guards are here to stay
On justice wrought, let come what may

And if strike bombs, or gas or prey
The tanks and jets, at night or day

Al Aqsa’s guards are here to stay
And fight they will, let come what may

Share. Facebook Twitter LinkedIn Email Telegram WhatsApp
Previous Article“Death to Arabs”: Jewish ultra-nationalists storm Al-Aqsa ahead of Zionist march
Next Article How to be a Stranger