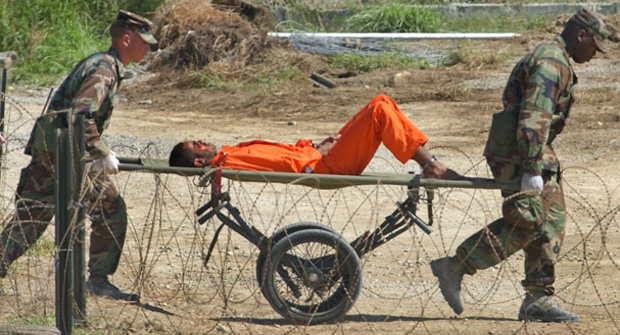 Within hours of taking office, President Barack Hussein Obama has issued an order to stop the military tribunals at Guantánamo Bay in order to review and possible overhaul them. Many would have hoped that the decision would have gone well beyond a mere review of the Military Commissions’ process. However there has been a clear message that justice will be provided to the detainees.

The projected aim of the new administration to close the base has been declared a triumph from those in his camp. Although the human rights community has welcomed this position despite its delayed arrival, there are a number of questions that still hang heavy around the neck of those who must find an alternative solution.

One of the main sticking points that will be brought by human rights campaigners is the volume of detainees being held as part of the “war on terror” elsewhere in the world. With reports of 24,000 detainees in Iraq and 14,000 in secret detention – the numbers seem astronomical compared with the 250 or so detainees remaining in Guantánamo. In light of the numbers, dealing with Guantánamo is the easy option for President Obama despite his attempts to show an overt commitment to human rights and the rule of law. The extent to which such policies will be taken further to those detained outside of Guantánamo will still need to be seen.

From the perspective of abuse and torture, the detainees unanimously agree that Guantánamo was by far more humane than any of the prisons they were detained in elsewhere. Detainees speak of their time in Bagram Airbase and the Dark Prison, both in Afghanistan, and both steeped in some of the worst offences by US soldiers against detainees. Despite the scandal to emerge from the Abu Ghraib prison in Iraq, the volume of those detained in detention without charge in US department of defence (DoD) facilities remains staggering and well beyond reasonable especially in light of the grievances attached to Guantánamo.

Measures have already been drafted to bring about a change in policy from the Bush period as legislation is used as a key tool to counteract illegality. On 6 January 2009, Senator Feinstein of California proposed the lawful interrogation and Detention Act 2009 purportedly aiming to: “reverse the harmful, dangerous, un-American, and illegal detention and interrogation practices of the past seven years.” The Feinstein proposal has four aims that it seeks to achieve in helping to change the status quo of detention policies:

The implementation of the above points would be hailed as a great victory by human rights groups and would prove that change is possible under the new Obama regime. In the words of Senator Feinstein, these changes would allow for detainees to:

Be charged with a crime and tried in the United States in the Federal civilian or military justice systems. These systems have handled terrorists and other dangerous individuals before, and are capable of dealing with classified evidence and other unusual factors.

With all the attention both through the media and politically being on Guantánamo, the question of justice for Muslim suspected terrorists in the US legal system has never truly been raised.

The presidency of Barack Obama has been one that has threatened hope for change in attitudes and history. Decades of African-Americans being incapable of receiving fair trials in certain courts in the US has brought about the need for a major shift in policy: nothing has said that more clearly than the election of a black president. It is this point in itself that provides the greatest challenge to the new administration. How will it stop Muslims becoming the new blacks in the US judicial system, when a number of cases suggest that it is inconceivable that they could possibly receive a fair trial?
One case that is of particular importance is that of Ali Saleh al-Marri, the last enemy combatant on US soil. For seven and half years he has been detained in the US without having been charged with any crime; in his case, Guantánamo is in the US as much as it is in Cuba.

Al-Marri’s case is only one though among a sea of others wrought with procedural and ethical difficulties. Biased juries, insufficient evidence and disproportionate sentencing have become a key feature of the way in which Muslim suspected terrorists are treated. Sabri ben Kahla was detained as part of Virginia Paintball trials and acquitted of any involvement with jihad or terrorism. Kahla was later detained again on a perjury charge and convicted on the same facts as the original case to a sentence of 10 years. The prosecution’s case rested on evidence by Evan Kohlmann, a purported terrorism “expert” who gave evidence on jihad movements around the world without ever referencing Ben Kahla’s guilt – the guilty verdict was very much based on Kahla’s Muslim identity rather than any tangible evidence.

The imminent closure of Guantánamo Bay is a policy change that should be praised. However by itself it does not represent the necessary paradigm shift that proves that the US has truly changed its attitude in detention policies in the “war on terror”. Public opinion in the US may have improved over the years in relation to the African-American community, however there is a very real danger that the bias may have merely displaced itself on to Muslims – a community which to all intents and purposes has become the new black.