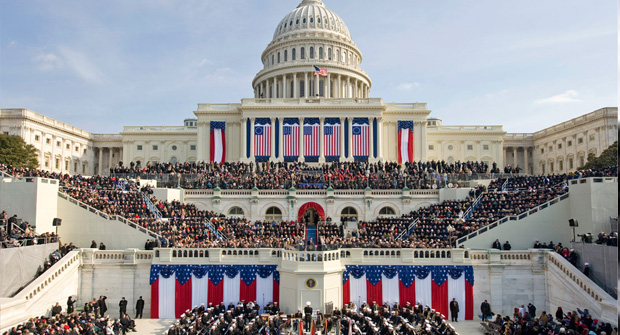 Of course, the many Muslims of both the East and West who called for Obama’s support, with his every word on the tip of their tongues, will undoubtedly be overwhelmed with a sense of shame while many commentators both Muslim and otherwise resist the urge to say “told you so”.

The inaugural speech, prepared by Obama’s writers and edited by himself, left more to be desired resembling a sermon more than a speech. There is no doubt that Obama, being evidently more intelligent than Bush, managed to address issues that affect the wider citizens of the world, yet the leaders he criticised for oppression and terror wouldn’t necessarily evoke names such as those Obama intended.

As well as addressing the economic, healthcare, and environmental problems facing the US, he spent an important part of the address discussing foreign issues. As the first (semi) Afro-American president, it was quite ironic that he mentioned the ‘founding fathers’ who “faced with perils we can scarcely imagine, drafted a charter to assure the rule of law and the rights of man, a charter expanded by the blood of generations”, especially given that most of those founding fathers were slave owners and in no way would they have accepted, nor intended in the charter, the presidency of a black man.

In keeping with the contradictory state of US presidents, Obama said, “We will begin to responsibly leave Iraq to its people, and forge a hard-earned peace in Afghanistan.” Having accepted the irresponsibility of Bush and Co in attempting to occupy Iraq and milk it for its oil’s worth, Obama apparently isn’t ready to afford Afghanistan the same amount of dignity in letting Afghani’s decide the future of their own country. If anything, it will renew the call of the mujahideen of Afghanistan with fighters gathering once again reminiscent of the Afghan-Russia conflict.

Obama also indicated that in similar fashion to Bush, he intends to continue with the Israeli instigated accusations that Iran is building nuclear bombs. Of course, Iran were not as quick as the Gulf states in welcoming the Obama presidency, Ahmadinijad saying earlier, “If changes are fundamental, genuine and based on respect… we wait and see and do not make premature judgement”. However, more aptly, if Obama intends to “work tirelessly to lessen the nuclear threat”, then I suppose he’ll be commencing with Israel.

Turning his attention to so-called ‘terrorists’, he claimed “We will not apologise for our way of life, nor will we waver in its defence”. It is extremely poignant to note that such rhetoric has been continually utilised by neo-cons (such as Bush) who have attempted to portray fighters as those who want to destroy the US, where in reality, individuals such as Osama bin Laden have repeatedly stated that if the US were to cease from imposing their oppressive policies in the Middle East all acts of violence would also discontinue. Thus, the mere fact that Obama has resorted to such propaganda evidently proves that although there may be ‘change’, it certainly won’t be in the Middle East. In continuing with his Bush-like rhetoric, he said “those who seek to advance their aims by inducing terror and slaughtering innocents, we say to you now that our spirit is stronger and cannot be broken; you cannot outlast us, and we will defeat you.” Spoken like a true neo-con, Obama managed to resemble his Zionist colleagues egotistically assuming that the US will manage to eradicate all forms of resistance to their colonial oppression. Moreover, his statement concerning those who “terror and slaughtering innocents” highlights the theme of contradiction running through all neo-con discourses, as if any nation could surpass the US and Israel in the massacre of innocent civilians. The mere fact that Obama failed to mention the current carnage of Gaza by the terrorist apartheid state of Israel clearly demonstrates that pro-Zionist policies will continue to dominate both the bias of the US president and the policies of the White House.

In an apparent attempt to imply states such as Iran, Venezuela, and others who openly disagree with US policies, Obama said, “To those leaders around the globe who seek to sow conflict, or blame their society’s ills on the West…To those who cling to power through corruption and deceit and the silencing of dissent, know that you are on the wrong side of history; but that we will extend a hand if you are willing to unclench your fist.” Yet, any individual aware of the oppressive regimes littering the Middle East would promptly apply the above descriptions to leaders such as Hosni Mubarak, the Gulf monarchies, Mahmoud Abbas, and many others. Yet in keeping with the American colonialist mindset, Obama has clearly indicated that support for wicked dictators shall continue in similar fashion to the killing and torturing of those who dare to resist. What was quite notable was the fact that Obama didn’t refer to the ‘axis of evil’ nor the ‘war on terror’, an obvious bid to distance himself from Bush terminology. However, in using the Shakespearean phrase in the current context, “a war by any other name is just as evil…”

As was clear from Obama’s speech, the continual support of pro-Zionism and pro-Middle Eastern dictatorships shall continue, with the intensified oppression of innocent Muslims continuing in Afghanistan once again. In the end, Obama is a politician, and as one he chose his words carefully, ambiguously mentioning nations and leaders. Overall, the tone of the speech was sombre, imparting no great news nor informing us of any change, but instead affirming the reality so well known to all those who despise both Zionism and those who wage war killing innocent Muslims in foreign lands.

The eminent companion of the Prophet (peace be upon him), Abu Bakr (may Allah be pleased with him), once famously said, “if anyone amongst you used to worship Muhammad , then Muhammad is dead, but if (anyone of) you used to worship Allah, then Allah is Alive and shall never die.” He then recited “Muhammad is no more than an Apostle, and indeed (many) apostles have passed away before him…”1 Similarly, if anyone had trust in Obama then it is incumbent that s/he know that he cannot even help himself, as Allah stated “And those whom you call upon besides Him (Allah) cannot help you nor can they help themselves.”2 But “whosoever puts his trust in Allah, He will suffice him. Verily, Allah will accomplish his purpose. Indeed Allah has set a measure for all things.”3