A Man Amongst Cowards 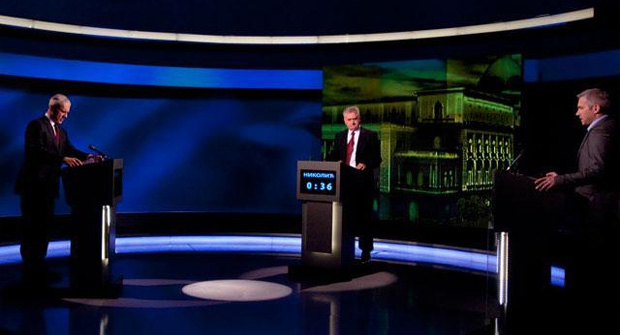 The Prophet (peace be upon him) once stated, “The greatest jihad is to speak the word of truth to a tyrant”, a jihad that the Prime Minister of Turkey ever-so imperturbably undertook at the WEF (World Economic Forum) a couple of days ago.

The WEF being a annual convention held at Davos, Switzerland, should have been in the midst of discussions pertaining to the economical woes of the world, yet in true Zionist fashion, the president of the terrorist state of Israel managed to appropriate 25 minutes to a pathetic justification of the massacre of innocent people in the prison that Gaza is, all the while jabbing his finger conceitedly. His monologue came after calls by Recep Tayyip Erdogan, the Prime Minister of Turkey, for the Obama administration to list Israel as a terrorist state for alleged atrocities against civilians in Gaza.1

The Israeli propaganda machine has consistently spewed misinformation and lies about the terrorism they have subjugated the inmates of Gaza to, all but with a nod of approval from the West. Claiming to repel the rocket attacks of Hamas, Shimon Peres failed to expound in his 25 minute rant that by far, most of the dead in Gaza were innocent civilians. Chomsky stated in a recent article, “One of the heroic volunteers in Gaza, Norwegian doctor Mads Gilbert, described the scene of horror as an “All out war against the civilian population of Gaza.” He estimated that half the casualties are women and children. The men are almost all civilians as well, by civilized standards. Gilbert reports that he had scarcely seen a military casualty among the 100s of bodies. The IDF concurs.”2

The tyrant Peres claimed that “Israel was forced on to the offensive against Hamas by thousands of rockets and mortars fired into Israel”3 as if Hamas have no apparent reason for their attacks. Of course, the Israeli falsifiers have continually claimed that Hamas are evil, a term which seems to effortlessly roll off the tongues of the many Western commentators who discuss the Gaza massacre, yet Israel’s crimes against humanity seem to merely be a misjudged act. Such double standards have long been in place in Western thought.

“The tragedy of Gaza is not Israel, it is Hamas. They created a dictatorship. A very dangerous one.” claimed Peres, thereafter stating, “Why did they fire rockets? There was no siege against Gaza. Why did they fight us, what did they want? There was never a day of starvation in Gaza.” Such audacious claims brink on being humorous, and clearly demonstrates the ability of the evil Zionist movement to bold facedly falsify the facts knowing that the truth has already become evident to the masses. It also demonstrates the Israeli assumption that if you say something enough, no matter how outrageous it may seem, people will start to believe it. Such cowardly methods have become quite evident through the deceiving Israeli claim that Hamas rockets are in fact a Palestinian attempt to destroy Israel. Such a pathetic claim deserves reprimanding, not merely for the fact that the Israeli’s have assumed that the world is as stupid as to believe an organisation as small and unequipped as Hamas – those who have been described by the IDF as ‘farmers with guns’ – could destroy a state fully backed by a superpower and military supremacy by land, sea and air. That’s not to mention the 200 nuclear bombs current being held in their arsenal! If the Israeli claim is that Hamas is a terrorist and illegal organisation who targets innocent civilians, then firstly, why has Israel assembled a team of lawyers to repeal any legal claims of crimes against humanity – much evidence indicating that Israel openly targeted innocent people, most of who were women and children. Secondly, in terms of illegality, one is only left to question the fact that Israel has singlehandedly broken more UN conventions than all of the countries in the world put together. If Israel, as Peres claimed at the WEF, is committed to peace, why is that Israel has maintained a policy of rejectionism by failing to “accept the long-standing international consensus on a two-state settlement that has been blocked by the US and Israel for over 30 years, since the US first vetoed a Security Council resolution calling for a political settlement in these terms in 1976…but it is important to be aware that US-Israeli rejectionism today is even more blatant than in the past. The Arab League has gone even beyond the consensus, calling for full normalization of relations with Israel. Hamas has repeatedly called for a two-state settlement in terms of the international consensus. Iran and Hezbollah have made it clear that they will abide by any agreement that Palestinians accept. That leaves the US-Israel in splendid isolation, not only in words.”4

However, the reality of the situation is that the Israeli criminals have never wanted peace based on mutual terms, but instead to instigate civil war between Fatah and Hamas in order to manifest another Arab leader ever-willing to bow his head in submission to the US-Israeli will, all for the fee of presidency, even if it be just in name. This plan is not, and was not, a conspiracy tale, but was a documented matter published in Vanity Fair5 detailing an account of how Bush, Rice, and Elliott Abrams (Deputy National-Security Adviser ) backed Fatah killers to overthrow the democratically elected Hamas. “ The account was recently corroborated once again in the Christian Science Monitor (Jan. 12, 2009) by Norman Olsen, who served for 26 years in the Foreign Service, including four years working in the Gaza Strip and four years at the US Embassy in Tel Aviv, and then moved on to become associate coordinator for counterterrorism at the Department of State. Olson and his son detail the State Department shenanigans intended to ensure that their candidate, Abbas, would win in the January 2006 elections – in which case it would have been hailed as a triumph of democracy. After the election-fixing failed, they turned to punishment of the Palestinians and arming of a militia run by Fatah strong-man Muhammad Dahlan, but “Dahlan’s thugs moved too soon” and a Hamas pre-emptive strike undermined the coup attempt, leading to far harsher US-Israeli measures to punish the disobedient people of Gaza. The Party Line is more acceptable.”6

Even in reference to the current carnage of Gaza, the reality of Hamas rockets was simply due to US-Israeli measures to punish the disobedient people of Gaza. “After Israel broke the June 2008 ceasefire (such as it was) in November, the siege was tightened further, with even more disastrous consequences for the population. According to Sara Roy, the leading academic specialist on Gaza, “On Nov. 5, Israel sealed all crossing points into Gaza, vastly reducing and at times denying food supplies, medicines, fuel, cooking gas, and parts for water and sanitation systems…” During November, an average of 4.6 trucks of food per day entered Gaza from Israel compared with an average of 123 trucks per day in October. Spare parts for the repair and maintenance of water-related equipment have been denied entry for over a year. The World Health Organization just reported that half of Gaza’s ambulances are now out of order” – and the rest soon became targets for Israeli attack. Gaza’s only power station was forced to suspend operation for lack of fuel, and could not be started up again because they needed spare parts, which had been sitting in the Israeli port of Ashdod for 8 months. Shortage of electricity led to a 300% increase in burn cases at Shifaa’ hospital in the Gaza Strip, resulting from efforts to light wood fires. Israel barred shipment of Chlorine, so that by mid-December in Gaza City and the north access to water was limited to six hours every three days. The human consequences are not counted among Palestinian victims of Israeli terror. After the November 4 Israeli attack, both sides escalated violence (all deaths were Palestinian) until the ceasefire formally ended on Dec. 19, and Prime Minister Olmert authorized the full-scale invasion. A few days earlier Hamas had proposed to return to the original July ceasefire agreement, which Israel had not observed. Historian and former Carter administration high official Robert Pastor passed the proposal to a “senior official” in the IDF, but Israel did not respond.”7

It is quite surprising that the many immoral Zionists, neo-cons, and Islamaphobes still maintain the innocence of Israel and guilt of Hamas. Even more shocking were such sentiments being echoed by Arab leaders during the massacre, yet, in the dense fog of treachery, deceit, and falsification that international politics has become, there emerged a leader who managed to say a word of truth to the tyrant’s face.

Recep Tayyip Erdogan who was also on the panel at the WEF refused to be subjugated to the lies of the Zionists clashing with Shimon Peres in a battle of words. The Turkish Prime Minister in an impassioned retort denounced Israeli claims stating that “you are killing people.” And that Israel has “committed crimes against humanity.”

Of course, many will claim that Erdogan’s statements against the terrorist state of Israel cannot be considered a great feat considering the fact that he is a leader of a nation and protected, yet such scrutiny fails to consider the fact that Erdogan has been that first world leader since the massacre to openly reject Israeli claims of defense and articulate their crimes against humanity. This has most notably pitted him, and inevitably his country, against Western nations such as the US who are themselves controlled by Zionists and continually support Jewish Zionist crimes. In addition to that, the EU will be seriously evaluating Turkey’s admission into the EU given that they will undoubtedly regard Erdogan’s comments somewhat supportive of Hamas, something Erdogan has repeatedly been accused of.

Turkey has previously aided in talks between Israel and Syria, all of which may be jeopardised. Additionally, Erdogan will undoubtedly face criticism from Turkish secularists who have preferred to ally with Israel than support the occupied Palestinians – all in their extreme hatred of Islam and Muslims. In fact, there is an on-going investigation in Turkey into a planned coup by terrorist secularists who planned to cause anarchy in Turkey with a spate of bombings in a bid to overthrow the ruling political party.

Despite all of the above, Erdogan boldly challenged Israeli propaganda calling Peres a killer to his face, while the very pathetic UN Secretary-General Ban Ki-moon, who was also sharing the platform, sunk into his chair staring at his shoes afraid to engage with reality – no change there then. Having not only exposed Peres’ vile attempts to distort the truth, Erdogan stormed off the rostrum8 after the Zionist moderator David Ignatius, a Washington Post columnist, informed Erdogan that he had “only a minute” to respond to a 25 minute monologue by Peres as “We really do need to get people to dinner.” 9 Such a statement is pitiful at the least, where leaders are forced to abandon the world’s most important issues for a spot of supper. Of course, it was not the need for supper that sought an end to Erdogan’s challenge, but the uncomfortability Erdogan’s comments afforded all those present – akin to bringing up the topic of religion in a room full of atheists.

It is for his courageous actions at the WEF that we who stand for justice and truth salute Erdogan, neither was he silenced or cowed by Peres, nor was he intimidated by the attitude of the West towards the Zionists, and in the end Ignatius failed to command him; Erdogan said as he pleased and left on his own terms vowing never to return. It was indeed a day when the Zionists attempted to oppress and silence the Turkish Prime Minister, and in return they were countered and then disregarded.