Thinking about Freedom of Speech 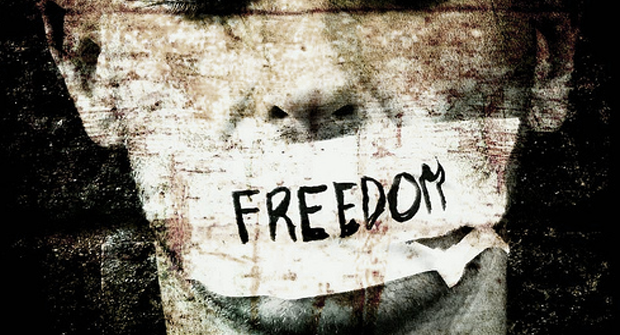 There are a number of issues of which popular British culture had previously been tolerant but no longer so, as events continue to show. Taking the example of the veil, whilst the nation-wide debate on the veil continues to reach new heights, it becomes very clear that however increasingly exhaustive the debate becomes, there remains a lack of interest towards the alternative perspective, namely, the views of the Muslims. At times, publicly ill-informed comments are made regarding the issue of the veil. So where does freedom of speech commence and conclude, and does it in fact, have any boundaries at all? Should our liberties be taken vis-à-vis with a certain level of appropriateness and political correctness?

Another issue which became very apparent from recent debates is whether the morality of the masses is necessarily a standard for ‘right’ and ‘wrong’ in speech and behaviour, or should the deciding factor be the principle of individual freedom. These two principles will result in an antagonistic conflict if they are not subordinate to other principles that will judge between them. Respect for others’ beliefs may be an example of this, whereby respect is maintained at all times.

‘If we accept that there is no deciding factor for the acceptance of behavioural values/ideologies except for that of individual or majority opinion, it is therefore possible for all values to change from one era to another, and from one society to another, according to majority opinion. This would infer that one cannot rely upon common set values in deciding what will benefit or harm people in their material and spiritual lives, or else all values become equally valid and it doesn’t matter which of the values a given society accepts or rejects.’2

However, does this mean that all behaviour considered objectionable by secular societies today such as incest (for which there are serious penalties in place), should be considered objectionable only because of contemporary inclinations? If so, we must appreciate that trends (which consist of popular opinion) do not remain at a constant, but alter and amalgamate. In the same manner, this may lead to the acceptability of crimes based on the principle of absolute unsubordinated individual freedom. Therefore, one cannot claim with absolute certainty, that an all inclusive unsubordinated freedom of speech by its very nature is beneficial for the public at large. If freedom of speech is not subordinate to any another principle, and the acceptability of behavioural norms are based upon popular opinion, alarmingly enough, ‘current trends’ become an absolute standard by which speech may be deemed as appropriate or otherwise. A simple example of this would be the trend of women’s suffrage; it was only in 1928 that women were allowed the vote on equal terms as men (over the age of 21). Should current trends mould our behaviour, or should our behaviour and speech be subtly subordinate to the respect for others?

At closer inspection one will find that it is not freedom of speech which is a necessity at all times and places, but any given situation may necessitate freedom of speech. An example of this can be given whereby one objects to the behaviour of an oppressive dictator for the common good. One of the fundamental aspects of freedom in one’s speech is not to create a nationwide uproar in anger, but to allow an exploration of innovative methods to conceptualize the discussion and add depth to popular discussions which all too often become superficial.3 The ill effects which arise as a result of superficial and ill-informed discussions make it very clear that if freedom of speech is not subordinate to principles of common decency and respect, the inevitable discussion which follows may become ineffective and destructive rather than constructive.

It is also from common decency for one not to draw upon other religious practices and making them ‘seem’ to be working against the progression of society, however significantly preposterous it might seem to an individual. A healthy discussion is always encouraged; however discussions with no positive outlet may lead to unnecessary escalatory hatred for ‘the other side’s’ views on the issue being discussed. The Archbishop of York – Dr. John Sentamu was quoted to have made some very irresponsible comments regarding the rights of British Muslim women in wearing the veil. The veil, or any other covering is a Muslim woman’s choice, and she may decide whether to wear it or not. The Archbishop of York stated that ‘Muslim scholars should ask three questions. First, does it conform to norms of decency? Secondly, does it render you more secure? And thirdly, what kind of Islam are you projecting by wearing it?’4 Questions which lead to healthy discussions (which include an alternative perspective to the debate) and progress are sincerely encouraged. However, unconstructive outcomes which result from discussions with no aim like the aforementioned are made worse, the reason being that its intended audience is largely varying in understanding, and as a result, a large part of the discussion will almost certainly be misunderstood (which goes against the aims and objectives of a healthy discussion). If the core objectives of a healthy discussion, which would be to have a positive outcome by means of it, are not met, how can one possibly claim it to be constructive? The effect is none other than adding an unhealthy discussion leading to another argumentative deadlock. Using this example it would also be unjustified if unhealthy ill-informed discussions with no aim criticised celibacy, practiced by Church Priests, as it does not conform to the norms of decency in current Britain.

One very vital point must be raised; in that there is a difference between an ignorant feud and an intellectual debate. Freedom of speech does not give one the right to cause disputes, and argue for the sake of quarrelling, but does however give one the right to a debate and this would only be constructive if done so in a thoughtful and intellectual manner; understanding that a certain level of respect and decency must be maintained at all times. A person has his or her right to freedom of speech, but a certain level of decency and appropriateness needs to be maintained at all times. Whenever confronted with these situations our prime task is not so much to follow popular attitudes towards religious principles of another faith, but to do otherwise by adding to any debate in a rational and logical manner. Many a time the nation tends to follow popular opinion, and then claim this to be their freedom of speech. All too often tabloid journalism has a tendency of making ‘a mountain of a mole hill’, and attempts to dupe their readers into firstly acknowledging, and then accepting their story, which yet again, is merely a snippet of the whole situation at hand. Instead, a basic but integral part of the conceptual freedom of speech is the fact that people are allowed to decide for themselves rather than allowing others to interpret situations for them. This allows the masses to be free of having to conform to authoritarian minority views, and in so doing, upholding parity in the acceptance of freedom in speech. Therefore merely uttering randomly aimed comments regarding the fundamentals of religion or philosophy, and then claiming this to being freedom of speech, is a completely flawed perception. Speaking one’s mind is not the same as blindly following another’s speech.

These are some of the many issues which differentiate between a productive and a non-productive debate. One should also keep in mind that a certain level of appropriateness must be maintained at all times, whereby unsubstantiated rumours are not propagated nor assumptions made about a particular religion or ideology. Another key point which arose from the recent debate is that of the responsibilities of people in authority, such as Jack Straw. Mr. Straw had every right to enquire about an issue which he thought to be of paramount importance. However, the manner in which this was conducted was extremely irresponsible and inconsiderate. If a genuine debate were to ensue, surely it should not be debated under the supervision of tabloid journalism; as such methods of journalism have tendencies of instigating very shallow and superficial discussions.

So superficial was the general knowledge on this subject that some parts of the nation assumed the veil was in fact the headscarf of Muslim women. Instead, Mr. Straw’s prime task should have been to provide a framework within which the discussion could have been conducted in a philosophically sound fashion. As discussions on these issues tend to be heated and over-polemical, as well as superficial, his task should have been to add a deeper understanding to it4. The Government, Mr Straw, or anyone else instigating a polemical discussion about religion should aim in trying to moderate the discussion. This can be achieved by using innovative ways in which to perceive the issue, that is, to highlight all the differing perspectives of a discussion rather than leaving the matter at hand to randomly take on its own direction. This presents a method by which an argumentative deadlock may be countered and how polemical pro- and contra-discussions can be overcome.

A popular argumentative deadlock only leads to confusion and misconception of the discussion at hand. The prime example, as it is relatively recent, is the Muslim women’s veil in Islam. An argumentative deadlock was reached which lead to misunderstandings and assumptions such as veiled Muslim women being oppressed by misogynistic male relatives. In complete contrast were the words of Na’ima B. Roberts, a Caribbean convert to Islam who in fact adorns the veil. She stated that the veil is something worn by Muslim women independent of domestic pressure, and is her mode of choice for the practice of modesty and believes it to be part of her religion. Another consequence of indiscriminately speaking at free will is the recent escalation of bullying towards Muslim pupils in the UK. Chris Keates, general secretary of the National Association of Schoolmasters Union of Women Teachers, told a conference that the debate (on the veil) had ‘fanned the flames of prejudice.’5