Are you ready for our first ever NATIONAL CAMPAIGN?
Home / Current Affairs / 17 suspicious facts about Daesh 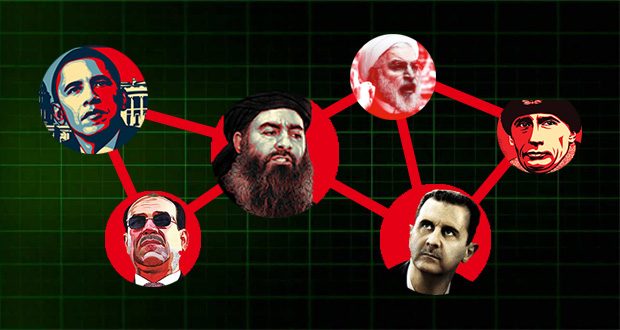 Under US-led aerial bombardment, Iraqi Government forces and pro-Iranian militia known as the ‘National Mobilisation Front’ continue their assault on Sunni neighbourhoods. Although disturbed and aggravated, many Muslims around the world are struggling to understand exactly what is happening. On the one hand we recognise the atrociousness of these crimes, yet on the other, and lending to the tangled and delusional propaganda delivered by those forces complicit in the ‘grander objective’, we are made to think that the alternative is ISIS, or Daesh. Daesh, however, is now well known to be a perverted group, either a contemporary stroke of the Khawarij whose persistent support to the interests of western hegemony, the despotic Syrian regime and Iran are just an unfortunate coincidence; or an outright colonial project.

Apart from the readily available evidence and arguments that links them to both despotic regimes[1] and western governments[2], simple, common sense prevails through their very scheming handiwork, even in Iraq where it is less clear. Before adding 17 vital issues to this effect for each and every one of us to consider, we must note that Sunnism is not a ‘sect’ as we are made to believe, nor is it merely an alternative dogma, it is practically the entire Muslim nation that does not adopt a schism or agree to sectarianism.

With that in mind, consider the following.

1) Six Iraqi Sunni provinces rebelled against the previous Maliki sectarian government and did not participate in the latest elections; a political rebellion long before the current armed struggle.

3) Mosul was suddenly handed over by the Iraqi Regime to Daesh with all of its equipment and everything in it and without forewarning in June 2014. Up to 30,000 Iraqi soldiers fled an attacking force of 1,500.[3]

4) Daesh has since only ever infiltrated Sunni areas and has never even gone near to the Iranian border. Tehran previously limited Daesh’s presence to within 40km of the Iraqi-Iranian border and this warning was issued publicly.[4] The group, ready to adopt attacks on powerful states including Turkey has thus far respected Iran’s wishes.

5) Convoys comprising tens or hundreds of vehicles owned by Daesh regularly move through Iraqi desert land, holding identity flags without anyone or anything—aircraft or military personnel—confronting them. Note here that the oft-touted ‘Counter-ISIL’ military coalition in Iraq comprises of 60 active member states,[5] with eye-watering contracts with private “defence” corporations.

6) Daesh has halted its advancement at the borders of Samarra and Baghdad and has not fired a single bullet into Shi’ite territory.

7) Daesh’s extending northern front has stopped at the borders of Kurdistan, not taking a single step into Kurdish territory. Daesh’s crimes have so far occurred solely against Sunni areas and states and specifically in the six provinces it occupies.

8) Battles took place in areas such as Palmyra that created a convenient smokescreen for its cunning end. These supposed battles brought about no positive outcomes for the Syrian Revolution, but only bolstered the group’s munitions under the watchful eye of the so-called International Coalition. Both Palmyra and Raqqa were, before Daesh, liberated by revolutionary groups from the Syrian Regime, but upon Daesh entering, they were handed over to the Syrian Regime[6] and the Kurdish PKK, respectively.

9) Daesh, instead of retrieving their regions have moved on to assault the next Islamic Revolution stronghold; the town of Marea, located 25km north of Aleppo.

10) Those who know Iran’s strategy appreciate that it is willing to sacrifice hundreds or even thousands of Arab Shi’ites in order to achieve its grander expansionist objectives. Iran is happy for Daesh to execute some Shi’ite Arabs, if this feeds its wider campaign of bringing the region under its control.

11) Daesh have declared Kufr (disbelief) on everyone but have yet to declare Kufr on Iran or a single Iranian official. Other perverted stances include their declaration of Kufr against the Palestinian Islamic Resistance group Hamas which did not extend to Hamas’ more secular rival Fateh. Everyone, particularly Islamic groups are, by their classification apostates, a member of a ‘Sahwa’[7] movement and all of their opponents are outside of the fold of Islam.

12) Upon entering any province, Daesh give its residents the option of giving the pledge of allegiance to their leader ‘al Baghdadi’, thus surrendering their weapons in exchange for promised ‘protection’ or of facing execution at knife-point. After collecting the residents’ arms and taking exclusive control of it, they begin carrying out their cunning plan.

13) The provinces’ residents are then subject to starvation and besiegement by the criminal and sectarian ‘Popular Mobilisation’ and the residents of the province are dispersed in every direction. A sham battle takes place in which Daesh boast about killing scores of ‘Safawis‘, releasing video after video about the ‘Lions of the Khilafah‘ and the ‘Soldiers of the Khalifah‘ and other such nonsense that entices the emotions of the mindless.

14) The result, every time, is exactly the same; an ignominious defeat in every Sunni area (Tikrit, Ramadi and others) that Daesh are present in. Daesh’s fighters withdraw to another area, leaving its civilians to suffer the brunt of the ruthless, Shi’ite ‘Mobilisation Front’ alone through looting, burning, killing and rape. This ends in the complete annihilation of that area, wiping it completely off the map.

15) Likewise the process of eliminating Iraq’s Sunni communities is carried out, one community at a time. After Fallujah the only province left is Mosul and its fate does not look any more promising. At this point Daesh will have completed their objective, handing over the Sunnis and their areas to the sectarians and ending the Sunni presence (as communities) in Iraq. All the while the world cheers on under the pretext of fighting Daesh terrorism.

16) Abu Mohammad al-Adnani, who is al-Baghdadi’s likely replacement recently announced their readiness to go back to the desert, indifferent about the ongoing destruction of towns and desecration of people’s honour, not least women. The main thing is that they remain as an idea, despite their oft-parroted slogan “the state (Daesh) will remain and stretch further.”

17) Daesh have almost completed their objective in Iraq which is much like their objective in Syria. It is well known that they weakened and assaulted the Syrian Islamic revolutionary groups in the latter, after having controlled the majority of Syria’s territories.

In fact the international perceived threat of Syria being overruled by mainstream Muslim groups—its people’s will—is what has created alarm bells for both the US and Russia who, instead of supporting the people’s revolution, have weakened the groups who are fighting the regime and Daesh at the same time. So even if the above impression of ‘conspiracy’ is not entirely true, it is therefore impossible to envisage a project that serves Iran and Bashar’s interests better than Daesh and all of those complicit with it.

[7] According to the Middle East Policy Council, “From 2007 to 2008, Iraq’s tribal “Sahwa” (Arabic for “Awakening”) was a key component of the U.S. “surge” strategy and largely credited for its role in the dramatic reduction of violence across the country“, specifically targeting groups opposed to the US led invasion.

Previous: Abdul Sattar Edhi Returns to His Lord
Next: The Islamic History of the Champions of Europe – Portugal