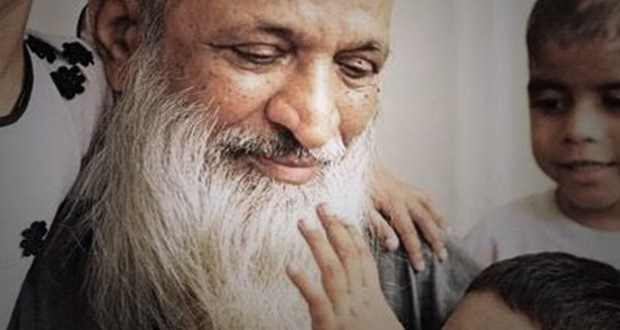 “The best of people are the most beneficial to people.”[1]

The ummah and the world at large today has lost one of its most beneficial and influential people, as Abdul Sattar Edhi (rahimahullah) passed away at the age of 88.[2]

We send condolences not only to his family but the people of Pakistan and beyond, who lost a man today who truly inspired and helped millions over his lifetime. May Allah forgive all his sins, accept all of his good deeds and reward him according to the best of them, out of His infinite mercy.

We ask and hope in Allah that Abdul Sattar Edhi comes under the hadith where the Prophet (sallAllahu ‘alayhi wasallam) said,

Whoever meets the needs of his brother, Allāh will meet his needs, and whoever relieves a Muslim of some distress, Allāh will relieve him of some of the distress of the Day of Resurrection. [3]

There is much to be said about this man’s inspirational life and pursuits. Peter Oborne recently wrote the following eye-opening article after spending some time with Abdul Sattar Edhi (rahimahullah).[4]

In the course of my duties as a reporter, I have met presidents, prime ministers and reigning monarchs.

Until meeting the Pakistani social worker Abdul Sattar Edhi, I had never met a saint. Within a few moments of shaking hands, I knew I was in the presence of moral and spiritual greatness.

Mr Edhi’s life story is awesome, as I learnt when I spent two weeks working at one of his ambulance centres in Karachi.

The 82-year-old lives in the austerity that has been his hallmark all his life. He wears blue overalls and sports a Jinnah cap, so named because it was the head gear of Muhammad Ali Jinnah, the founder of Pakistan.

No Pakistani since Jinnah has commanded the same reverence, and our conversations were constantly interrupted as people came to pay their respects.

Mr Edhi told me that, 60 years ago, he stood on a street corner in Karachi and begged for money for an ambulance, raising enough to buy a battered old van. In it, he set out on countless life-saving missions.

Gradually, Mr Edhi set up centres all over Pakistan. He diversified into orphanages, homes for the mentally ill, drug rehabilitation centres and hostels for abandoned women. He fed the poor and buried the dead. His compassion was boundless.

He was born in 1928, when the British Empire was at its height, in Gujarat in what is now western India. But he and his family were forced to flee for their lives in 1947 when the division of India and creation of Pakistan inspired terrible communal tensions: millions were killed in mob violence and ethnic cleansing.

This was the moment Mr Edhi, finding himself penniless on the streets of Karachi, set out on his life’s mission.

Just 20 years old, he volunteered to join a charity run by the Memons, the Islamic religious community to which his family belonged.

At first, Mr Edhi welcomed his duties; then he was appalled to discover that the charity’s compassion was confined to Memons.

He confronted his employers, telling them that “humanitarian work loses its significance when you discriminate between the needy”.

So he set up a small medical centre of his own, sleeping on the cement bench outside his shop so that even those who came late at night could be served.

But he also had to face the enmity of the Memons, and became convinced they were capable of having him killed. For safety, and in search of knowledge, he set out on an overland journey to Europe, begging all the way.

One morning, he awoke on a bench at Rome railway station to discover his shoes had been stolen. He was not bothered, considering them inessential.

Nevertheless, the next day an elderly lady gave him a pair of gumboots, two sizes too large, and Mr Edhi wobbled about in them for the remainder of his journey.

In London, he was a great admirer of the British welfare state, though he presciently noted its potential to encourage a culture of dependency. He was offered a job but refused, telling his benefactor: “I have to do something for the people in Pakistan.”

On return from Europe, his destiny was set. There was no welfare state in Fifties Pakistan: he would fill the gap. This was a difficult period in his life. Shabby, bearded and with no obvious prospects, seven women in rapid succession turned down his offers of marriage. He resigned himself to chastity and threw all of his energy into work.

He would hurtle round the province of Sindh in his poor man’s ambulance, collecting dead bodies, taking them to the police station, waiting for the death certificate and, if the bodies were not claimed, burying them himself.

Mr Edhi’s autobiography, published in 1996, records that he recovered these stinking cadavers “from rivers, from inside wells, from road sides, accident sites and hospitals… When families forsook them, and authorities threw them away, I picked them up… Then I bathed and cared for each and every victim of circumstance.”

There is a photograph of Mr Edhi from this formative time. It could be the face of a young revolutionary or poet: dark beard, piercing, passionate eyes. And it is indeed the case that parts of his profound and moving autobiography carry the same weight and integrity as great poetry or even scripture.

Mr Edhi discovered that many Pakistani women were killing their babies at birth, often because they were born outside marriage.

One newborn child was stoned to death outside a mosque on the orders of religious leaders. A furious Mr Edhi responded: “Who can declare an infant guilty when there is no concept of punishing the innocent?”

So Mr Edhi placed a little cradle outside every Edhi centre, beneath a placard imploring: “Do not commit another sin: leave your baby in our care.” Mr Edhi has so far saved 35,000 babies and, in approximately half of these cases, found families to cherish them.

Once again, this practice brought him into conflict with religious leaders. They claimed that adopted children could not inherit their parents’ wealth. Mr Edhi told them their objections contradicted the supreme idea of religion, declaring: “Beware of those who attribute petty instructions to God.”

Over time, Mr Edhi came to exercise such a vast moral authority that Pakistan’s corrupt politicians had to pay court. In 1982, General Zia announced the establishment of a shura (advisory council) to determine matters of state according to Islamic principles.

Mr Edhi was suspicious: “I represented the millions of downtrodden, and was aware that my presence gave the required credibility to an illegal rule.”

Travelling to Rawalpindi to speak at the national assembly, he delivered a passionate denunciation of political corruption, telling an audience of MPs, including Zia himself: “The people have been neglected long enough.

“One day they shall rise like mad men and pull down these walls that keep their future captive. Mark my words and heed them before you find yourselves the prey instead of the predator.”

Mr Edhi did not distinguish between politicians and criminals, asking: “Why should I condemn a declared dacoit [bandit] and not condemn the respectable villain who enjoys his spoils as if he achieved them by some noble means?”

This impartiality had its advantages. It meant that a truce would be declared when Mr Edhi and his ambulance arrived at the scene of gun battles between police and gangsters.

“They would cease fire,” notes Mr Edhi in his autobiography, “until bodies were carried to the ambulance, the engine would start and shooting would resume.”

Mr Edhi eventually found a wife, Bilquis, but his personal austerity was all but incompatible with married life. When the family went on Hajj, a vast overland journey in the ambulance, he forbade Bilquis to bring extra clothes, because he was determined to fill the vehicle with medical supplies.

Reaching Quetta in northern Baluchistan, with the temperature plunging, he relented enough to allow her to buy a Russian soldier’s overcoat. Later on, when their children grew up, Mr Edhi would not find time to attend his daughter’s marriage.

But Mr Edhi’s epic achievement would not have been possible but for this inhuman single-mindedness. Today, the influence of the Edhi Foundation stretches far outside Pakistan and Mr Edhi has led relief missions across the Muslim world, providing aid at every international emergency from the Lebanon civil war in 1983 to the Bangladesh cyclone in 2007.

There are no horrors that Mr Edhi and his incredibly brave army of ambulance men have not witnessed, and the numerous lives they have saved.

The story of Mr Edhi coincides with the history of the Pakistan state. More than any other living figure, he articulates Jinnah’s vision of a country which, while based on Islam, nevertheless offers a welcome for people of all faiths and sects. Indeed, the life of Mr Edhi provides a sad commentary on the betrayal of Jinnah’s Pakistan by a self-interested political class.

One evening, as the sun set over Karachi, I asked Mr Edhi what future he foresaw. “Unless things change,” he said, “I predict a revolution.”

[3] Redacted from ḥadīths in Bukhārī and Muslim