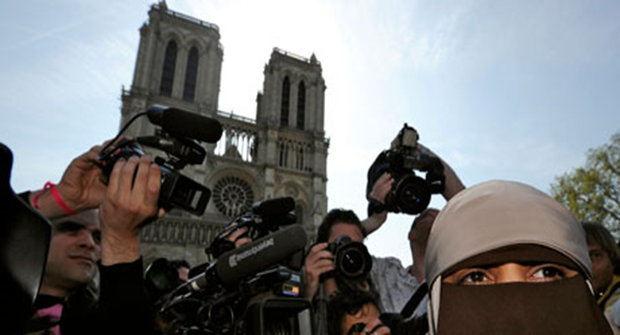 So what huge accomplishment, one may ask, has been achieved by this first arrest? Two years of debate; bias; conjured justifications all mounting to this grey day in history… the day a God fearing, crimeless; and most likely a home maker lady is detained for which crime? For covering her face.

Slavery! That’s dictation if I ever heard it. Where’s liberty and freedom now? Sarkozy swears to oppose the enslavement of woman to men, passionately arguing that even the woman who chose to wear it is a happy slave – which he says, does not justify slavery.

So why has no one voiced these poor women slaves, as they are portrayed? Because they have an answer that does not suit Sarkozys’ and does not help escalate the false image that the media and Government have been building up over the years. It has reached a peak now, probably more so yesterday than ever before that the niqaabi deserves neither respect nor any sympathy. Any abuse has been self invited, and any level headed arguments have no worth, since she is a slave and has been apparently indoctrinated to believe so.

No one focuses on the fact that most Niqaab wearing women in Europe previously led lives where they didn’t cover up. They have ‘enjoyed’ the liberty of dressing up in Western clothes and wandering streets before the eyes of men, some of whom quite cosily look out for the ‘sexiest girl’ they can see. That’s not paranoia, and should not cause chaos when uttered. Our own encounters with the odd man here and there, justify to many that it is reason enough to cover up outside our homes.

I, for one, wear my niqaab for many reasons – men, are not one of them. If I was to visit an Island, far away from anyone I knew, including my father and husband, then I would still wear my niqaab, just as I did before I was married and after I had convinced my father that it was a good thing to do. That should be sufficient evidence that I wear my niqaab out of choice. Again, the day I started wearing niqaab was not a day I chose to reject Western culture or make a point to Westerners. That thought has never even entered my head. That, dear Westerner is a fallacy that ought be amended as in all honesty, I think it is the reason why the French feel so hurt and rejected. They cannot bear being abandoned for what they perceive is a lowly degradation and subjugation of the female mind.

True, I find the lifestyle of the Western woman degrading in her tight revealing clothing. I find it sad that she is not worthy of marriage or of being loyal to or of being protected by the men of her folk. I feel sickened that she allows men to jeer at her and whistle when she reveals a bit of leg, not caring if she holds an ounce of intelligence. That, in my eyes is degradation and subjugation of the female mind, but still not the reason why I chose to wear the niqaab. I am not making a point by wearing it, rather France is by banning it.

There are many evils out there that the French could tackle, but why they continue to pick on an apparently harmless group of women is still open to debate. The audacity to imply that they are liberating her is almost humorous, as even many Westerners agree, but the silence of the Muslims is felt even more awkwardly. Muslims, have sat back and watched them threaten to make this law based on assumptions and foul misunderstandings that affect the tiny proportion of niqaab wearing women today but for sure will harm more Muslims in some other practice very soon. France has to this day not given a valid, evidence based, rational argument for their ban, and the arrest today mounted to no benefit to society at all. What has been proven is that Muslims are considered second class and can be bullied and subjected to discriminatory laws. Furthermore, France has braved its path away from liberty and the justice that Europe pretends to uphold for all, and more towards the colonizing nature that has been dictated to many Muslims before.